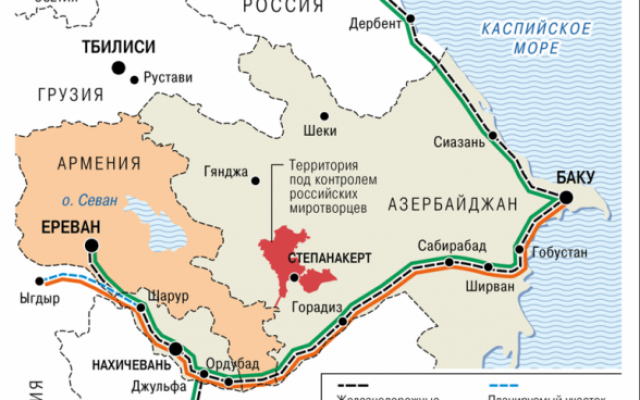 Kommersant.ru has published this map (13/1/2021) showing the prospective road and rail links that will be opened between Armenia and Azerbaijan, linking Armenia to Russia and Azerbaijan to Turkey.

For many years Armenia had refused to withdraw from the seven occupied districts around Mountainous Karabakh to pave the way for a peaceful, negotiated settlement of the Karabakh conflict. This drove the negotiations into deadlock. When Nikol Pashinyan came to power in Armenia, he took an even tougher stance on the Karabakh issue. The Armenian prime minister and his cabinet members made several provocative moves: Nikol Pashinyan declared “Karabakh is Armenia and that’s it”, effectively putting an end to the peace process; the then defence minister, David Tonoyan, described the country’s military doctrine as “New war for new territories”. Armenia enacted the doctrine when troops made an incursion across the state border into Azerbaijan’s Tovuz district last July where Baku’s vital energy and transport projects pass towards the West. This was a foolish strategic gamble. The motive for the July border incursion was to gain a strategic advantage, which would have been used to blackmail Baku to make concessions on Karabakh by accepting the annexation not only of Mountainous Karabakh, but also of the seven adjacent districts. The creation of illegal settlements and resettlement of ethnic Armenians from Lebanon and Syria in Lachin, Gubadly, Zangilan, Jabrayil and several villages in Agdam clearly showed the extent of Armenian irredentism.

Interestingly enough, Yerevan adopted an approach of strategic ambiguity to conceal its real long-term objective. It participated in sham negotiations in order to prolong the outdated status quo. The OSCE Minsk Group was ineffective in holding Armenia’s leaders to account. It turned a blind eye to the illegal settlements and failed to condemn the provocative political rhetoric of Pashinyan and his ministers. In this way, the mediators only contributed to the maximalist goals of Yerevan.

Azerbaijan’s military victory has turned everything upside down, creating a new political reality on the ground. This has to be taken into account by the Minsk Group co-chairs, who seemed content to keep the conflict frozen forever. Azerbaijan has restored the 130-km section of its state border with Iran, liberated the seven districts around Mountainous Karabakh, and restored access to key water resources in Karabakh. Armenia can no longer use these issues as bargaining chips. Azerbaijan is seeking to make the most of the new economic opportunities by cultivating and developing the region. It has announced plans for advanced technological innovations such as model villages, smart towns with green energy, and new agricultural infrastructure. This has seen many countries from within the region and beyond rushing to make agreements to participate in the Karabakh reconstruction process.

Azerbaijan is the first post-Soviet country to have restored its territorial integrity. For the first time Russia has had to recognise Turkey as a geopolitical regional factor in the South Caucasus, though Moscow has retained the greater role in the post conflict “peace building” process. The unwillingness of France and the US to pressurise Yerevan to withdraw from the seven occupied districts around Mountainous Karabakh helped Russia to retain its main role in the region, ultimately leading to the Russian peacekeeping force and mission in Mountainous Karabakh. These new realities cannot simply be reversed. The new US administration will have to take them into account when formulating its new policy in the South Caucasus. A one-sided, biased approach to the conflict is not going to help. The Biden administration needs to reach out to Azerbaijan and Turkey and to convince the Armenian side to normalise its relations with Baku and Ankara. Armenia can develop and achieve economic prosperity only if it builds good relations with its key neighbours.