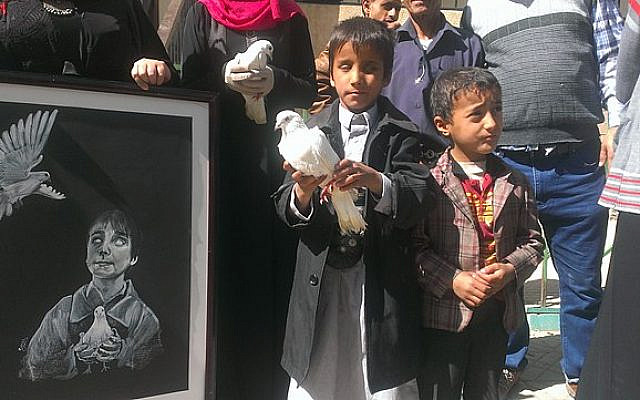 "A blind child carries a dove at a protest against the attack on the al-Nour Center for the Blind in Sana'a, Yemen, Jan. 10, 2016. Students say neither the school, nor themselves, have taken any side in the war.” (A. Mojalli/VOA/Wikimedia Commons)

There are two ways for two parties to reach a truce. There is real genuine understanding and amnesty, and nothing beats that. And then there is a plastic façade of the two parties going through the motions, but not really agreeing on any common ground. Oftentimes such a political agreement between nation-states is fostered by a third party, forcing a trilateral agreement that is unrealistic and will not last. Such has been—in our time—the Camp David Accords, the Oslo Accords, the Taba Summit, the Gaza withdrawal, and other trilateral moves Israel has been forced to make, upon American promises of peace with the Palestinians.

According to leaks in the press, relations between Tehran and Riyadh have been “warming”. On April 9, Baghdad hosted diplomatic talks between the two foes, which are aligned only as regional neighbors, surrounding Iraq. While the April 9 meeting was the only specific event of its kind to be recorded, there have supposedly been other clandestine sessions.

“…Iran is a neighboring country, we all aspire to establish a good and distinguished relationship with [them]…” Saudi Crown Prince Mohammed bin Salman, known affectionately by his initials: MBS told Saudi television-show host, Abdullah al-Mudaifer. “We do not want the situation of Iran to be difficult, on the contrary, we want a prosperous Iran,” he continued. “We have interests in it and it has interests in the Kingdom of Saudi Arabia to push the world and the region to prosperity.” Although, adding a tail of cautious optimism, the royal cited the same concerns about the Islamic Republic which are shared by many Western and Middle Eastern democracies: “Our problems are with Iran’s negative behavior, whether through its nuclear program, its support for outlaw militias in some countries in the region, or its ballistic missile program…” said MBS.

U.S. Secretary of State, Anthony Blinken, admitted, on the record, that it would be preferable to see the Saudis withdraw from Yemen, and the Houthis cease from conquest and expansion, and execute a cessation of its drone and missile attacks inside Saudi borders (where their targets are oil depots). But if it weren’t for the United States, the meeting between the Saudi Crown Prince, and his Iranian counterpart in Iraq, never would have happened. And what’s more: this is evidence that any ceasefire in Yemen, will always be built on an active fault-line of geopolitical strife. Tony Blinken told the Financial Times, “Talking is usually better than the alternative. Does it lead to results? That’s another question…But talking, trying to take down tensions, trying to see if there’s a modus vivendi, trying to get countries to take actions on things they’re doing that you don’t like—that’s good, that’s positive.” The pol concluded, “We have…when we’re acting at our best, a greater ability than any other country to mobilize others in positive, collective action,” he said. “But if countries are talking directly together without us in the middle, that’s maybe even better.” But this is easier said than done.

The problem, as the Jerusalem Post brought to light on May 4, 2021, is that, “Iran has acknowledged the discussions with Saudi Arabia—at the same time that Iran’s media brags of more Houthi attacks on Saudi Arabia using drones…” wrote Seth J. Frantzman, continuing that, “Iranian Foreign Minister Mohammad Javad Zarif even met with the Houthis. He is on a regional ‘Ramadan trip’ to shore up support for the Islamic Republic.”

Both sides, Iran and Saudi Arabia, are under United States diplomatic duress to ceasefire and call a truce. Blinken says that “if countries are talking directly together without [the United States of America] in the middle, that’s maybe even better…[than brokering a trilateral accord]”; but without an outsourced middleman, progress promises to whirlpool down the drain of failed diplomacy. Iran wants leverage as they head into and back out of the second round of discussions with the Biden administration in Vienna, Austria, centering on the 2015 JCPOA (Joint Comprehensive Plan of Action), which Trump pulled the United States out of in 2018. And Saudi Arabia has been warned by humanitarian lobbyists regarding the mass slaughter and displacement of Yemeni civilians, as well as their newly awarded sanctions from the administration of U.S. President Joe Biden, in response to the U.S. Intelligence report (on which the Trump administration originally suppressed or placed a gag-order of sorts) on the alleged assassination of journalist, Jamal Khashoggi, inside the Saudi consulate in Turkey.