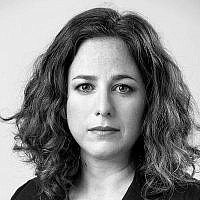 The Blogs
Alona Vinograd
Apply for a Blog
Advertisement
Please note that the posts on The Blogs are contributed by third parties. The opinions, facts and any media content in them are presented solely by the authors, and neither The Times of Israel nor its partners assume any responsibility for them. Please contact us in case of abuse. In case of abuse,
Report this post. 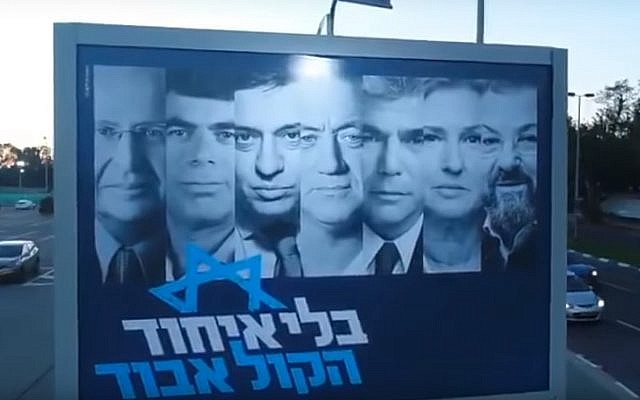 The billboard of the liberal parties that includes Tzipi Livni's face, in contrast to the one that removed her image before it was permitted to be displayed in Bnei Brak. (Screenshot, edited, from YouTube)

When a picture of MK Tzipi Livni was taken off billboards posted in the ultra-Orthodox city of Bnei Brak, as part of the campaign calling for uniting the various forces of “the center-left bloc,” the exclusion alarm went off, and social media cried out against the municipality, the advertising agency responsible for the campaign, and the politicians themselves. But this outcry was late in coming. It should have come much earlier — with the launching of the campaign proposing an alternative to Israel’s current political leadership, made up of six men and only one woman.

This practice, manifested so blatantly in the behavior of the group behind the slogan, “Without unity, your vote will be lost,” should not surprise us. A look at the campaigns of the candidates for prime minister reveals that women are excluded from the political game.

Netanyahu, Gantz, and Lapid (the latter two from the new Blue and White party), the leaders of parties that the polls predict will win the most Knesset seats, are running campaigns that exclude women from the public arena: the Blue and White party does not yet have a slogan, but since its first five slots are filled by men, we are not optimistic. The Likud’s slogan for now is simply, “Headed by Netanyahu.” These are the two dominant parties, which are investing the largest sums of money in their campaigns, and both understand that to win the election they must place a man (or two), preferably middle-aged, at their helm, and that he alone must be featured in the PR campaign that will bring them the longed-for victory. This is not adequate or appropriate representation. This is a disgrace.

It cannot be claimed that there are no women in Blue and White and the Likud. There certainly are; however, one needs a magnifying glass in order to find them. There are none in the first five slots and only two between the sixth and tenth slots. The decision to make women disappear from billboards, videos on social media, and the newspapers must trouble us all — not only the Bnei Brak municipality, which, of course, is raising its voice in the opposite direction.

It seems that behind every candidate for prime minister stands another man (or men).

The decision to white-out women from the campaigns arouses several questions. Have those candidates, and their strategic advisors, blotted out the female electorate in Israel? Or perhaps they think that, when women cast their ballot for prime minister, they are looking only for a man, and will feel safe and protected only if his picture is blazoned all over the country. Incidentally, a quick internet search reveals that the PR experts heading the three parties’ campaigns are all — you guessed it — men.

That Israeli society has made considerable progress is undeniable: in the recent municipal elections, six women were elected mayors; four women as heads of local councils; and four women as heads of regional authorities. Here the remark by Prime Minister Justin Trudeau of Canada, who back in 2015 understood that he could not form a government without equitable representation of women and men, is appropriate. When asked why his cabinet had equitable gender representation, he replied, “Because it is 2015.” What he understood then, we in Israel have yet to understand in 2019.

The exclusion of women from the public sphere undermines equality. Putting up billboards all over the country that showcase only men, constitutes discrimination. In the long run, the fact that the major parties are turning a blind eye to women politicians will deal a blow to their campaigns. Women are equal players in the political game. Their voices should be heard, and their pictures should be displayed in this stormy election season.

About the Author
Adv. Alona Vinograd is the director of the Center for Democratic Values and Institutions at the Israel Democracy Institute.
Related Topics
Related Posts
Comments