The Blogs
Julian Schvindlerman
Apply for a Blog
Advertisement
Please note that the posts on The Blogs are contributed by third parties. The opinions, facts and any media content in them are presented solely by the authors, and neither The Times of Israel nor its partners assume any responsibility for them. Please contact us in case of abuse. In case of abuse,
Report this post. 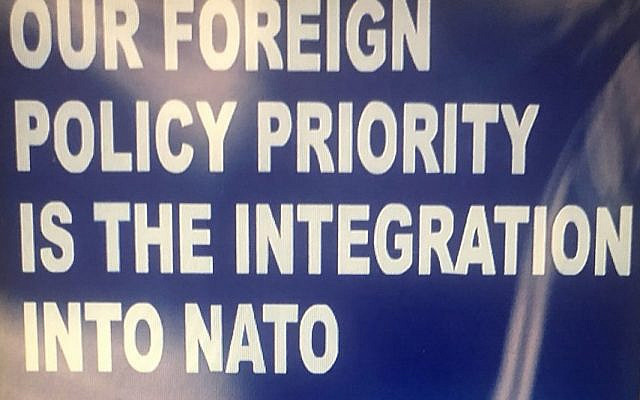 Last month, as nearly 100,000 Russian troops gathered at the Ukraine border and the Biden Administration announced it would send a token 3,000-soldier contingent to two Eastern European NATO countries, the military experts at the Vermont-based ice cream manufacturer Ben & Jerry´s met at the company´s situation room, assessed the complex geopolitical developments in Europe and reached a solid conclusion: the United States of America was to blame. On February 3rd, Ben & Jerry´s published its wise view on Twitter:

“You cannot simultaneously prevent and prepare for war. We call on President Biden to de-escalate tensions and work for peace rather than prepare for war. Sending thousands more US troops to Europe in response to Russia’s threats against Ukraine only fans the flame of war.”

To wit: totalitarian Russia prepared to invade an un-provoking democratic neighbor in what would soon become a war of aggression virtually unseen in Europe since WWII, the US responded by mildly strengthening two NATO members, and the smart executives of an American ice cream business took issue with their own country. Expectedly, this ultraprogressive political position elicited a few reactions, notably from current or former East European government officials.

“To Ben and Jerry’s to refresh your memory” said Stanislaw Zaryn, spokesman for the Administrator and Coordinator of the Polish Special Service: “Russia has been waging war against Ukraine since 2014. At present, it is still Russia, which is still exerting military pressure on Ukraine and is probably preparing for another invasion. By your statement you are getting Russia to hide their aggression. Shame on you!”. Eto Buziashvili, a former adviser to the National Security Council in Georgia, tweeted: “I’m wondering what does ice-cream company @benandjerrys think about Russia’s recognition of occupied Donetsk and Luhansk.” Natalia Yaresko, a former Ukrainian finance minister, twitted: “Your comments show a lack of understanding. Indulgence does not stop the aggressor. How it did not stop during World War II. You should be ashamed. We will never forget.” Then, she called to boycott their products. Swedish MP Tobias Billström said he now had “one more reason not to buy your products.” Former NATO Deputy Director of Innovation Edward Hunter Christie added his voice to the boycott call.

Political commentators weighed in the controversy, too. “Pretty sure this means they won’t be releasing a Si Vis Pacem, Para Bellum Pistachio ice cream anytime soon,” wrote Max Hauptman, citing the famous Latin maxim If you want peace, prepare for war. British expert Timothy Ash called it a “strange statement”. Kareem Rifai tweeted “Not a fan of y’alls newest flavor unfortunately” alongside a mocking picture of a putative new Ben & Jerry´s Mint Appeasement flavor. Jonathan Schanzer and Richard Goldberg of the Washington-based Foundation for the Defense of Democracies observed: “Corporate leaders with little to no experience in foreign affairs increasingly feel entitled to weigh in on complex policy challenges. If they are lucky, it only results in embarrassment.” The tweet was so ideologically odd that even Ben & Jerry´s parent company Unilever head Alan Jope criticized it: “They have a great track record campaigning on important issues. But [on] subjects where Unilever brands don’t have expertise or credibility it is best to stay out of the debate.”

It should be noted that Ben Cohen, one of Ben & Jerry’s founders, has opposed NATO enlargement as far back as 1998. At that time, NATO was incorporating Poland, Hungary and the Czech Republic, a move Ben & Jerry’s called “crazy.” In an interview with The New York Times, Ben Cohen offered a strange ice cream analogy, comparing NATO expansion towards the East to a competition between Ben & Jerry´s and Haagen-Dazs. In April of 1998, the Business Leaders for Sensible Priorities, a nonprofit founded by Ben Cohen, published an ad in The New York Times that read:

Let’s take NATO and expand it toward Russia’s very borders. We’ll assure the Russians we come in peace. We’ll explain that the Russian people should feel more secure knowing that Poland, Hungary and the Czech Republic are in a military alliance with the United States. It’s the same feeling of peace and security Americans would have if Russia were in a military alliance with Canada and Mexico, armed to the teeth, and excluding the United States. We’d all sleep better then, right?

Say ´NO´ to NATO expansion.”

There is a sweet irony here. Whereas the ice cream manufacturer has consistently opposed NATO expansion for nearly a quarter century, it has engaged in its own commercial expansion to NATO countries, boasting an impressive presence in 21 NATO member-nations, out of 30 that are part of the alliance. As Ben & Jerry´s official website informs us, the company is in the United States, Canada, Belgium, Czech Republic, Denmark, Estonia, France, Germany, Great Britain, Greece, Hungary, Italy, Latvia, Lithuania, Luxembourg, Netherlands, Norway, Poland, Portugal, Romania and Spain. So, Ben & Jerry´s thinks that it is okay to push NATO borders commercially and set up offices in no less than seven Eastern European nations, but NATO should not enlarge militarily to dissuade a super-power overreach. In other words, Ben & Jerry´s can install branches in NATO Eastern front for private economic gain, but the alliance should not expand Eastwards lest it offend Moscow´s sensitivities (1998) or to preserve Ukraine´s freedom, European security and world peace (2022).

I am saying this sarcastically, of course. A company selling ice cream along Russia´s border is no challenge to Moscow the way a US tank deployment might be. Still, it is legitimate to expect moral coherence from highly ideological businessmen so critical of NATO and US foreign policy. While corporate evolution and military build-up are clearly not the same, considering Ben & Jerry´s executives´ long-track record of political activism and NATO-skepticism, their own “NATO expansion” looks comfortably opportunistic.