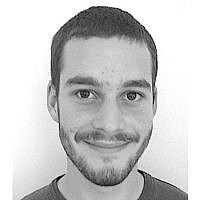 The Blogs
Daniel Stiebel
Apply for a Blog
Advertisement
Please note that the posts on The Blogs are contributed by third parties. The opinions, facts and any media content in them are presented solely by the authors, and neither The Times of Israel nor its partners assume any responsibility for them. Please contact us in case of abuse. In case of abuse,
Report this post.

This week Donald Trump is expected to recognize Israel’s annexation of the Golan Heights – which some supporters of Benny Gantz see as Trump’s ploy to save Bibi’s re-election campaign. But Bibi doesn’t need saving. He’s on course to win.

Gantz’s problem is deeper than the fact that he’s in free fall in the polls. (The speed of his descent is impressive. Three weeks ago, one poll showed Gantz’s party beating Likud by 10 seats. As of this past week, every poll puts Gantz ahead by 5 seats or fewer. Some polls even put Likud ahead.)

The problem is the reason that Gantz is falling – and that there’s no way he can fix it. Gantz is trapped. His campaign is over. Done. Finished.

Here’s why: The most critical thing that a candidate can do is to define himself. Gantz has defined himself in only one way: “I’m not Bibi.” That’s it. His party includes both left-wing and right-wing candidates. It’s not clear what Gantz stands for. And his failure to define himself in a positive way invites all the other parties to do exactly what they’re doing – to define Gantz for him.

Gantz’s support is eroding because his rivals, left and right, are succeeding in branding him the way they want. Even worse: they are turning Gantz’s very strength against him. His strength is appealing to voters across the political spectrum. But that is allowing the Likud to claim he’s a leftist who’ll form a government with Labor, Meretz, and even the Arab parties. Gantz counters that he’s not a leftist, and that he might even form a coalition with a Likud without Bibi – and that is giving Labor the opening to brand him as a right-winger, essentially Bibi II, who will build homes for a million new settlers.

So each time Gantz denies Likud’s claims, he just proves Labor’s. And vice versa. So more and more voters think Gantz might betray them and are abandoning him for their old parties.

As a rule, if your rivals attack your weakness, you can compensate for it – but not if they attack the weakness in your strength. You can’t change your strength. It’s the reason you’re running.

That’s why Gantz is trapped. His strength is being inclusive. He’s published a manifesto that’s so vague it can’t alienate anybody. His campaign ads refuse to discuss any policies.

And he can’t change in order to stop his slide. Gantz can’t publish any policies, because that would alienate some of his voters. And he can’t afford to. According to the analysis of one of Gantz’s own candidates, Meirav Cohen, any further drop in support will destroy his chances of becoming prime minister.

In other words, Gantz’s slide in the polls has now created a problem of its own. His supporters – all deserters of other parties – are willing to “lend” him their votes, but only if he can beat Bibi. Otherwise, they’ll just return to their old parties.

Gantz is in a vicious cycle. Now that he is shedding voters, he seems less able to beat Bibi, which, in turn, scares away more of Gantz’s voters: after all, if Bibi is going to be the next prime minister anyway, there’s no point in voting tactically to stop him; they’d rather vote for the party that reflects their beliefs.

Cohen illustrates his trap eloquently. She says that Blue and White needs to beat Likud by five seats in order to form the next government. And six of the seven latest polls show Gantz isn’t passing that threshold.

No surprise, then, that many of his voters no longer feel that they’re part of an exciting, growing, movement for change. Instead, they’re part of a sinking party that’s going to spend four dull years on the opposition benches.

This is one general who’s devised a losing battle plan — and for himself.

About the Author
Daniel Stiebel is a political forecaster specializing on the Mideast and Europe. He identifies major political forces and contrasts them with politicians' reactions to them, enabling him to forecast their behavior.
Related Topics
Related Posts
Daniel Stiebel
Comments