In January the Beverly Hills City Council presented me with a proclamation of honors. This was bestowed to recognize my ongoing battle against the Lithuanian Government for their fraudulent re-writing of their Holocaust history.

During the process of tracing who was responsible for the murder of my own Lithuanian family, I discovered the murderer was a Lithuanian named Jonas Noreika. Further research revealed that he is a current Lithuanian national hero. Then, it became incumbent upon me to appeal to the Lithuanian government to revoke his national honors. I was unequivocally met with total denial and distortion from the Lithuanian Presidency, Parliament, Public Prosecutor and many other government departments. It now appears to be a deliberate program to rewrite Holocaust history to suit Lithuania’s falsified national narrative about its heroes.

Ten years of legal actions, research, and public exposure have resulted only in further Lithuanian Holocaust revisionism, much along the lines of the Nazi propaganda Minister Goebbels, who said: “If you tell a lie big enough and keep repeating it, people will eventually come to believe it.” Clearly, the Lithuanian government has fine-tuned and mastered this strategy.

Eventually, with no other possible recourse I sued the Lithuanian government. Their Administrative Courts chose to rule on technicalities. The Government claimed that Jews have no material interest in discovering the facts of the Holocaust, and it would be too expensive to re-write their history books. The government requested dismissal of the case, which the Court granted. My appeal to the Lithuanian Supreme Court met a similar result; they concluded that the matter is “legally irrelevant” and chose to dismiss the case. In order to take the case to the European courts, I must now pursue Lithuania in their Civil Court and then their Constitutional Court. These delaying strategies are favored in a country still steeped in Soviet ideological tactics.

Noreika’s own granddaughter, Silvia Foti, has publicly requested the government to tell the truth about her grandfather, to no avail. Foti has been met with intimidation and insults from the Government for her independent research. Foti has since been honored by multiple U.S. cities and international organizations for her bravery in standing up to Lithuanian government intimidation.

The Lithuanian government has turned their murdered Jews into a national commodity by using Jewish history as a drawcard and building ancestral tourism trails. They appeal to Jews worldwide to invest in Lithuania and invoke positive historical narratives hoping that their mark is unaware of their duplicity.

Lithuania’s Ambassador to Germany, Darius Semaska, provides a perfect example of this strategy in action. He posted the following Tweet: 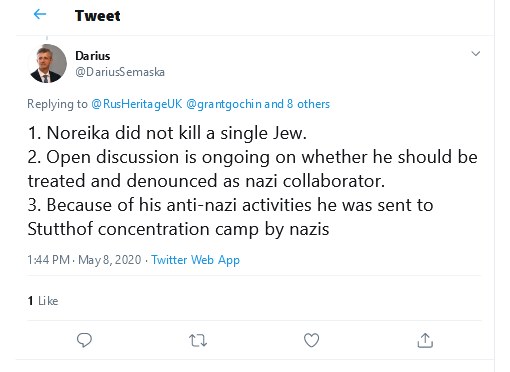 Each of Ambassador Semaska’s points are dishonest. 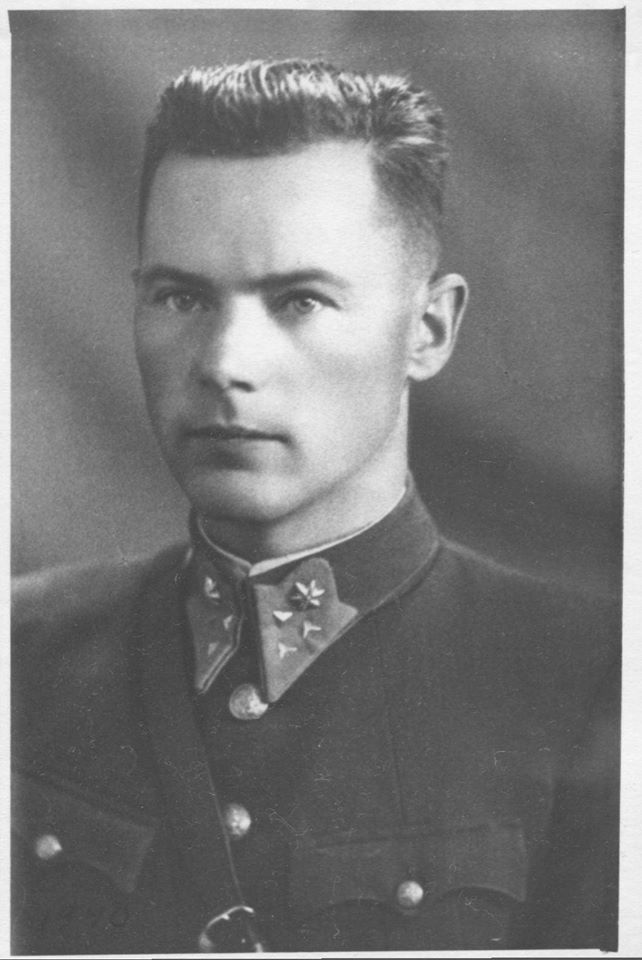 Jonas Semaška was Chief of the 7th and 13th Lithuanian Auxiliary Police Battalions; both were responsible for extensively perpetrating Holocaust crimes. Semaška’s battalion was responsible for murdering the Jews of Vinitsa in Ukraine. (Lithuanians were not content in murdering their own Jewish population, their battalions entered neighboring countries on Nazi missions to murder Jews there as well). After the war, Semaska was definitively connected with the genocidal murderer Jonas Noreika.

Even, the government sponsored “Genocide and Resistance Research Centre of Lithuania”, Lithuania’s largest purveyor of Holocaust revisionism has admitted that Jonas Semaška took part in the Holocaust. They did this only after Germany identified him as a Jew murderer. Just as with so many other Holocaust perpetrators, Lithuanian President Adamkus awarded Jonas Semaška national honors. In 2001, Semaska’s mortal remains were exhumed and reburied in a place of honor in Lithuania.

Semaska’s son Alvydas (R) during the ceremony. President Adamkus on the left

As with other Lithuanian Holocaust perpetrators, a street is named in Lithuania for Jonas Semaška. 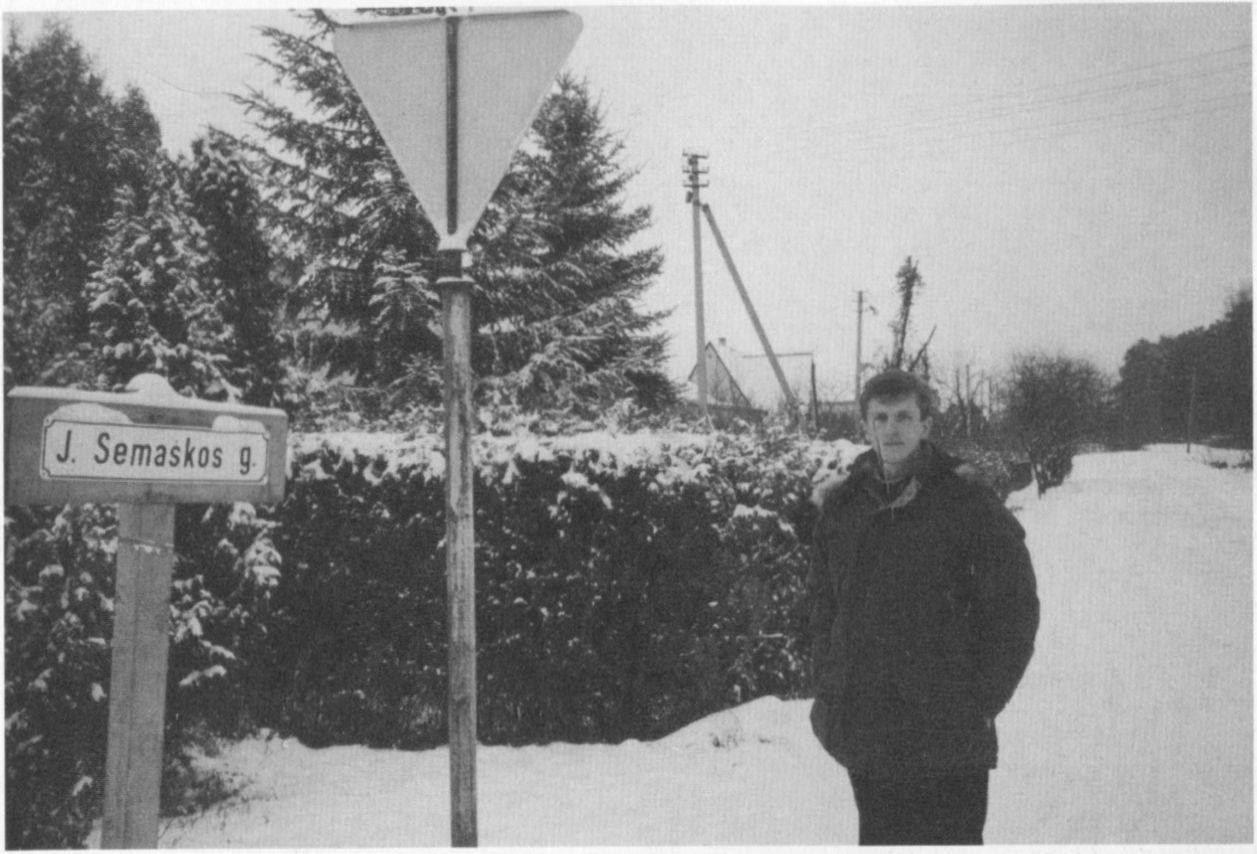 Semaška’s granddaughter published a book honoring her hero grandfather. She followed Lithuanian government strategy and portrayed a murderer as a hero. She took it one step further by claiming that Semaska saved Jews. She used a typical Lithuanian perpetrator strategy of denial by claiming that as battalion chief, he did not know what his soldiers were doing. He did not see them murdering Jews, he did not hear them murdering Jews, he did not notice thousands of Jewish babies, the elderly and others suddenly missing. He was the Chief and according to his granddaughter’s historic revisionism, he was uninformed about his solders’ activities.

Ambassador Semaska is filling big shoes in his posting as Lithuanian Ambassador to Germany. One of his predecessors is also a current Lithuanian national hero, Kazys Skirpa. Skirpa was responsible for advocating the “elimination” of Jews” from Lithuania, and inflamed Lithuanians to ethnically cleanse their nation. At that time, Lithuania had approximately 250,000 Jews, today the number is estimated at 3,000. Skirpa was remarkably successful in his mission, and just like Semaska and Noreika (and so very many others), he remains a national Lithuanian hero.

These deceptions have at last come to the attention of the world. All enlightened people are horrified by Holocaust revisionism, especially when it is practiced in the deliberate manner of Lithuania. On May 19, 2020, the City of Beverly Hills passed the following resolution (I have added links to their text for reference):

WHEREAS, as an international destination, the City of Beverly Hills is proud to embrace and celebrate religions and cultures from all over the world;

WHEREAS, the City of Beverly Hills and the State of Israel jointly entered into a declaration to promote and strengthen bilateral collaboration, economic development, enhance cultural relationships, and educational opportunities;

WHEREAS, the City of Beverly Hills has a history of condemning anti-Semitic behavior, including adopting a resolution to oppose the United Nations Resolution to deny Jewish historical and religious claims to the Temple Mount and the Western Wall in Jerusalem;

WHEREAS, the City of Beverly Hills passed a resolution in 2016 to support Assembly Bill 2844, California combatting the boycott, divestment, and sanctions (“BDS”) of Israel Act of 2016;

WHEREAS, the City of Beverly Hills adopted a resolution in 2019 condemning the California Department of Education for the then current draft curriculum of the Ethnic Studies Model Curriculum (ESMC) as it demonstrates a clear anti-Jewish bias that is anti-Semitic;

WHEREAS, the City of Beverly Hills adopted the International Holocaust Remembrance Alliance (IHRA) working definition of anti-Semitism in 2020;

WHEREAS, the City of Beverly Hills adopted a resolution opposing the decision of the United Nations High Commissioner for human rights to release a list of companies that do business in Israeli settlements in the West Bank;

WHEREAS, Holocaust denial and revisionism is an especially insidious form of anti-Semitism;

WHEREAS, the government of Lithuania is engaged in an active campaign to deny the culpability of Lithuanians who murdered Jews during the Holocaust, revising history, and turning perpetrators into national heroes;

WHEREAS, the Genocide and Resistance Research Centre of Lithuania, an agency of the government engages in Holocaust distortion by publishing false research asserting that Holocaust perpetrators were actually rescuing Jews;

WHEREAS, the Lithuanian government uses intimidation tactics against those that speak out against their Holocaust distortions;

WHEREAS, Lithuania has multiple state honors, monuments, and streets named for Holocaust perpetrators;

WHEREAS, the Lithuanian government misused Congressional documents to falsely declare that a significant Holocaust perpetrator, Juozas Ambrazevičius-Brazaitis, the head of the Lithuanian Provisional Government in 1941, had been “completely exonerated” and “rehabilitated” by the United States;

WHEREAS, Lithuania has repatriated the bodily remains of Holocaust perpetrators, Kazys Škirpa and Juozas Ambrazevičius-Brazaitis, from the United States and reburied them in Lithuania with national honors;

WHEREAS, following previous efforts by the governments of Ukraine and Poland, Lithuania’s ruling party publicly floated the idea of draft legislation declaring that neither Lithuania nor its leaders were responsible for the Holocaust and was “just a victim” during World War II,

NOW, THEREFORE, the Council of the City of Beverly Hills resolves as follows:

Section 1. The City of Beverly Hills condemns any attempts by the Lithuanian government to deny their historical state-sponsored, and other official acts facilitating the murder of Jews and others during the Holocaust.

Section 2. The City of Beverly Hills demands Lithuania cease all efforts to advance proposed legislation which declares Lithuania innocent of any crimes in furtherance of the Holocaust, including the murder of Jews and others.

Section 3. The City of Beverly Hills calls upon leaders in Lithuania to discourage any future attempts to pass legislation denying their role in the Holocaust and to instead acknowledge the culpability of their Interim Government, leadership, and population in the perpetration of the slaughter of Lithuanian Jews.

Section 4. The City of Beverly Hills encourages the government of Lithuania to revoke national honors for those that participated in the Holocaust, including the murder of Jews and others.

Section 5. The City of Beverly Hills calls upon the government of Lithuania to hold accountable officials of the Lithuanian government that are participating in Holocaust revisionism.

In “The Lucifer Effect Understanding How Good People Turn Evil “, Zimbardo writes: “Life is the art of being well-deceived; and in order that the deception may succeed it must be habitual and uninterrupted.” Beverly Hills, the world’s capital of media and commerce has now interrupted this Lithuanian deception. Other cities, States, countries and institutions will surely follow.