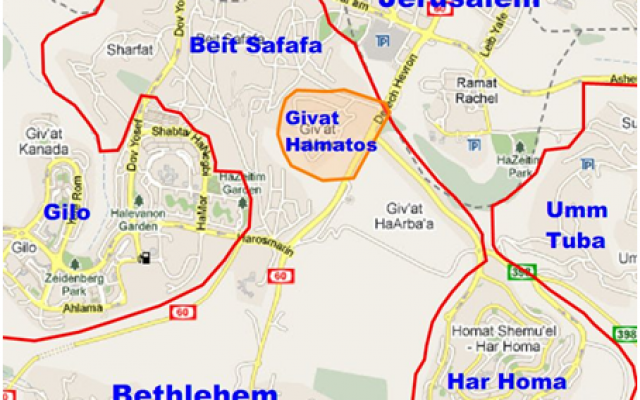 The most eastern part of the most southern part of Jerusalem. Reproduced with kind permission of the copyright holder . NB: There are all kinds of writings and lines on this map which we'll put in place when we describe the situation on the ground (pardon the pun).

None of the English media properly describe Netanyahu’s building move, which did not stop Europe and all kinds of Nations to condemn it. How ridiculous and dishonest this all is. And hate-based animosity.

I live meters away from Beit Safafa, one of the sites under discussion. An American outlet reports Netanyahu’s pre-election permission to start building thousands of new housing units. They call the grounds in question ‘predominantly Palestinian’ in ‘eastern Jerusalem.’ This is either a lie or they don’t know what is going on — have your pick.

Also the former Palestinian Post continues its disinformation campaign on the peace process. It ‘reports’ that the move would ‘make the division of Jerusalem along the 1949-1967 armistice line impossible’ while such division is impossible to begin with. It’s like saying ‘Giving meat to a lion makes it impossible for it to ever live on a vegetarian diet.’

Here are the facts before the opinion.

First of all, ‘eastern Jerusalem’ is a new spin. For decades, they used to call it ‘East Jerusalem’ as if the Jews lived in the West of the city and Arab Jerusalemites in the East. That backfired with Trump’s ‘Deal of the Century’ which gives the PA an Arab Palestinian capital in ‘East Jerusalem’ and the Jews in the West. Turns out, what the PA has been calling East was not Jerusalem at all. We all knew that all along.

Second, this is not eastern but southern Jerusalem. The map is a bit complicated but eastern never becomes southern. A picture is worth a few thousand words here. Let’s make it simple and look at the above map.

Har Chomah. This ‘Wall Mountain’ used to be a blatantly green hill in the middle of no-man’s-land. When politicians decided to ‘develop’ it, almost all these trees were cut down and replaced by a sea of Jerusalem-stone-covered apartments. The southern third for Arab Palestinians — it borders on Bethlehem — and the northern two-third for Jewish occupancy.

Givat Hamatos. This ‘Plain of the Plane’ is also a deserted place south of inhabited Jerusalem. Once, en masse flown in Ethiopian Jews were housed there in trailers and caravans until a more permanent living quarter could be found. Only a few people remained and it looked a good crime scene.

Beit Jala. This is a formerly Christian Arab village, crammed in the valley between Bethlehem and Jerusalem, a bit more to the West. Muslim militants have chased away most of the Christians and on Sundays, one doesn’t hear any more church bells.

Gilo. This is the most southern city quarter of Jerusalem with 60,000 inhabitants, situated on an East-West mountain ridge. It was built up since the Six-Day War. It’s so Jewish (with a handful of Arab houses) that even the Oslo Accords let it be part of Jewish Jerusalem. Hostile media still call it ‘a settlement south of Jerusalem’ and so does the government of the Nethermost. I live there already for 25 years, right through the Second Intifada shootings from Beat Jala (never got a medal). It’s connected by the North-South Dov Yosef Road (now a mess for a light-railway path), cutting through Beit Safafa and the North-South Hebron Road between Givat Hamatos and Har Chomah (a light-railway path soon on its way there too).

Hebron Road. You could’ve guessed it, the route from Jerusalem’s Old City to Hebron (on this map called Derech Hevron). It looked deserted so the Jerusalem municipality put trees, other greens, and some stone art along it to show it’s urban, connecting Gilo on the east with the rest of Jerusalem.

Beit Safafa. A 15-centuries old village (from the time of the Byzantine occupation), it used to be predominantly Christian. The Jordan occupation split the town in two until Israel reunited it in the Six-Day war. The Muslim population is apparent from its very load calls to prayer (speakers courtesy Saudi Arabia). But a large part of its population now is Jews. There, Jews from neighboring Gilo shop, get a haircut and have their car washed.

Houses for Jews in Givat Hamatos would further encircle Beit Safaf. Look at the map. But not completely! These mapmakers have wishful-thinking-ly drawn a Palestine-Israel border and you see that Beit Jalala still connects to Bethlehem. That it would cut the ‘Arab’ area in two is simply untrue.

Further, more houses for Har Chomah and Beit Safafa will only be welcomed by all the Jewish, Christian, and Muslim inhabitants.

So, these objections by the PA, the Muslim world, Europe, and Peace Now are again much ado about nothing. They should, instead, consider the true scandal for which they happen to be responsible: the refusal to live with the Jews in peace.

It should give a welcome relief to the city that has trouble housing its offspring and the whole area that has a building stop for so many years already (trying to please the haters — in vain, of course).