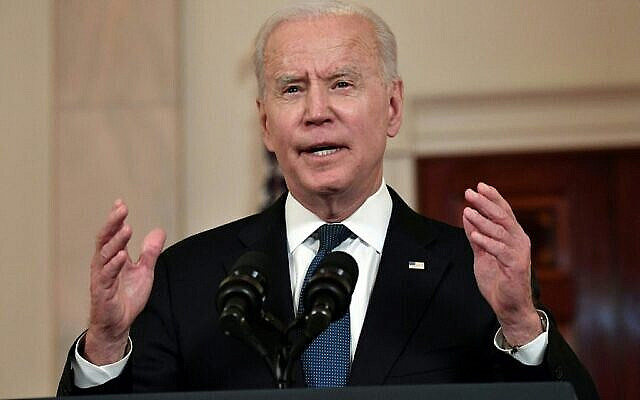 US President Joe Biden delivers remarks on the Middle East in the Cross Hall of the White House, in Washington, DC on May 20, 2021. (Photo by Nicholas Kamm / AFP)

Imagine for a moment if someone like Bernie Sanders had been president of the United States during this recent round of fighting in Gaza. The White House would have likely condemned Israel harshly in line with sentiment on the so-called progressive left, may well have held back aid for crucial defense systems; and might even have withdrawn diplomatic cover at the United Nations. Bottom line: Israel would have been cornered and found itself clashing openly with its most important ally.

Now imagine for a moment if Donald Trump were still president. He would probably have offered unequivocal approval of Israeli actions, maybe even egged it on to hammer Hamas harder, and perhaps even triggered Hezbollah and others to enter the fray as well.  Bottom line: Israel would have earned more hostility in the rest of the world and, unrestrained by the United States, could have gone on bombing lower-value targets in Gaza and dragged out the fighting for weeks, even months, with little to show for it except more resentment from the world and greater tensions at home.

Thankfully for Israel, the president of the United States is Joe Biden, and his cool hand provided the key balance between support and restraint that allowed Israel to end the campaign in as optimal a manner as it could have hoped.

By repeatedly endorsing Israel’s paramount right to defend itself against a terrorist organization lobbing thousands of rockets toward civilians, Biden held the subversive voices within his Democratic party at bay and made it clear to all that he had Israel’s back. And with his quiet diplomacy, through which he pressed Prime Minister Benjamin Netanyahu for a ceasefire in 6 calls over 11 days, he made sure things didn’t get out of hand and prevented the cascade of international criticism of Israel from turning into a tsunami.

It was a perfect demonstration of what I alluded to in a February post when I argued Biden was the right US president for Israel because he wouldn’t give the government a blank check on settlement construction or military adventures, and, at the same time, when he did back Israel, it would be genuine and the rest of the world would take it more seriously. “Israelis,” I wrote, “can count on Biden to have the country’s most significant interests at heart.”

Biden proved it by negotiating the ceasefire and then unequivocally stating that for there to be peace the region must acknowledge Israel’s right to exist as a Jewish state.

Israelis need to recognize, however, that Biden’s term may well be a final opportunity to cement the special relationship with the United States because Biden is likely to be the last Democratic president of a generation that still sees Israel as a beacon of light rather than an exemplar of the world of Trump.

Make no mistake, the four (or perhaps eight) years of the Biden administration will be the last of their kind for Israel. After that, Israel will no longer be able to rely on the kind of emotional and strategic bond it enjoyed with Democratic presidents like Lyndon B. Johnson and Bill Clinton.

The future bodes either a Trump-like Republican, whose bear hug would alienate Israel from the allies it should desire, or an Alexandria Ocasio-Cortez-like Democrat who has little understanding of Israel or empathy for its needs. Instead, those who view the plight of the Palestinians as analogous to that of blacks fighting systemic racism in the United States and the behavior of Israel as that of a vicious oppressor may increasingly become the voters who elect Democrats and the Democratic candidates who are elected.

So, when Biden, a true friend, says he sees a “genuine opportunity” to make progress in the Middle East in the aftermath of the fighting, Israel needs to listen.

The Trump administration’s embrace and a relatively lengthy reprieve from terrorism had stoked the illusion in Israel that the Palestinians and their ambitions for statehood had simply disappeared. There appeared to be no consequences for kicking the can down the road. So, Israel moved on, ignoring its next-door neighbors and barely mentioning them in the recent, and frequent, election cycles.

The latest round of violence in Gaza, coupled with the eruption of violence on the part of some of Israel’s own Arab citizens, has burst that illusion and provided a sobering reminder that it is in Israel’s best interest to take the long-simmering conflict more seriously.

The history of the “peace process” in recent decades clearly demonstrates that it will not be easy to resolve the conflict and that Israel cannot do that all on its own.  But history also shows that Israel has fared better just by trying.  In fact, Israel has benefited even from merely being perceived as trying.

If Israel wants to do this on more favorable terms, it should try on Biden’s watch. Not only would it be more advantageous than waiting for what comes next, it would be a fitting recognition of the president’s loyalty when Israel needed it.