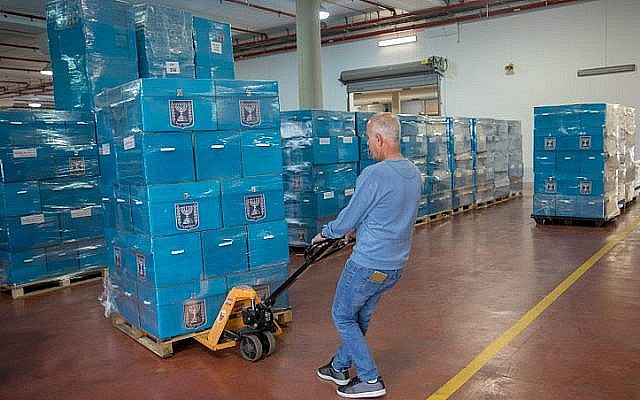 A worker prepares ballot boxes at the Central Elections Committee warehouse in before they are dispatched to polling stations. (Noam Revkin Fenton/Flash90)

Israel’s election on March 23 will be the fourth since my youngest daughter was born. She’s not even two. Teenaged American girls can celebrate their Quinceanera at 15, and French teenagers can turn 19 and be old enough to drink, before experiencing the fourth election of their lifetimes.

But in Israel, we’ve become the beasts of the ballot. Election Day is a national holiday in Israel, and it should be a celebration. Instead, it has become a tedious chore that offers little hope of renewal.

I’ve been thinking a lot about the frequency of Israeli elections lately because the current campaign is the first that I’m not covering as a journalist since I was first eligible to vote in 1996. For those counting, that’s a streak of ten elections in 21 years.

In fact, the last Israeli government to serve out a full term was elected in 1988. Israelis used to quip that if they kept having so many elections they’d turn into Italy. It’s no joke anymore. For the sake of comparison, Italy has had half as many elections as Israel over the past two decades.

It doesn’t take a constitutional scholar to see that something is terribly wrong with this trend. Elections are the bedrock of a healthy democracy, but too many of them can also be its undoing.

A public already skeptical of its politicians is invariably losing faith in the entire process, resigning itself to life under a strongman like Benjamin Netanyahu and affording outsize influence to the most fanatical voters at the end of the spectrum.

This is hardly a phenomenon unique to Israel. Many Western democracies have found their political bodies increasingly polarized and paralyzed. The United States, for example, has regularly mandated election dates and yet its governments too often are stalemated because of executive-legislative standoffs.

But the risks of paralysis are even higher in Israel, a small country in a tough neighborhood that disproportionately depends on the earning power of its diminishing, secular middle class.

On a purely functional level, no government can tackle Israel’s myriad long-term challenges and carry out any substantial reforms when operating on such a short leash. Furthermore, its most recent governments have been dominated by Netanyahu and his ultra-Orthodox Jewish partners, who benefit most from this deadlock and have no interest in rectifying it.

Israel’s current crisis is powered by the unprecedented entanglement of an indicted prime minister holding the country hostage in order to avoid facing judgement in court. But the systemic weaknesses of Israeli politics long pre-date Netanyahu. His legal predicament and the Covid-19 crisis have merely magnified the problems.

Because of Israel’s electoral system of proportional representation, multi-party coalitions are required to form governments. A breakdown of the two major ideological blocs that were the foundation of Israel’s politics for its first few decades have given way to dependence on more, smaller parties, whose exaggerated power allows them to dictate agendas. In extreme cases, even lone lawmakers can tip the balance and extort the prime minister, whose government often doesn’t include a majority of members from his own party. These marriages rarely survive for long, and rarely do they serve the public optimally.

As a result, Israeli ministers serve shorter terms than do their Western counterparts, lawmakers are substituted in and out at alarming rates and political parties are institutionally weak. It all adds up to a political system that “is managed by people who are not experienced and not well-versed on the issues,” explained Yohanan Plesner, head of the non-partisan Israeli Democracy Institute.

This is hardly just wonky rhetoric. Israel has impressively improvised its way through the coronavirus pandemic without a truly functioning government. It’s been two years since a state budget, or any other major piece of legislation, has been passed. The fact that the country keeps cruising, and even thriving, is mostly thanks to its vaunted security apparatus and robust professional civil service that keeps the engines revving even while facing withering attacks from populist politicians.

But that’s no remedy for the long run.

Israel’s most daunting domestic challenge is integrating its fastest-growing sector – ultra-Orthodox Jews – who are being provided few skills to cope with the challenges of the modern world. Thanks to their kingmaker status in Israel’s fragmented parliament, the ultra-Orthodox leadership perpetuates a segregated lifestyle, with a separate network of schools that teach very little math, science and English, while their large families subsist on taxpayer-funded handouts. It’s an arrangement that economists warn poses an existential threat to the country’s very wellbeing. To tackle it will require long-term planning, coordination and political courage.

Plesner argued that the “chronic instability” of Israeli politics provides a disincentive to cooperate with rivals in the same government and makes it practically impossible to conceive and implement any long-term strategy.

“Leaders know that the probability of them being able to see things through is so low that it is irrational to plan for the long-term,” he said. “If we keep to business as usual, we may find ourselves drifting toward the reality of a third-world economy and society. You can’t count on things remaining as they were in the past. This can catch up to us and then it might be late.”

The only way to solve this is by reforming Israel’s electoral system so that a stable government can be elected and can serve effectively. There are plenty of proposals out there, but any viable solution must include two key elements.

The first is a return to the two-bloc system in which there is a clear choice for leadership and the election marks a decisive verdict, rather than a kickoff to the horse trading. Declaring that the leader of the largest party will become prime minister, regardless of his or her probability of cobbling together a parliamentary majority, will encourage moderation among the main challengers and shrink the bargaining power of fringe parties.

The second is establishing a degree of personal accountability between voter and elected official. Currently, Israelis vote for parties, not candidates, so a politician’s career is dictated by his or her loyalty to party leader rather than a constituency. Providing a regional component will empower lawmakers to consider the interests of their electorate and incentivize them to push for longer terms in office.

Electoral reform is not the kind of exciting agenda that gets people out in the street so it will have to come from within. And that will only be possible if Netanyahu and the ultra-Orthodox are out of the way and the biggest parties come together for sweeping legislation.

These fixes will hardly solve all of Israel’s problems. But they will go a long way toward restoring some stability, instilling good governance and making sure that election day is once again the democratic celebration it deserves to be.