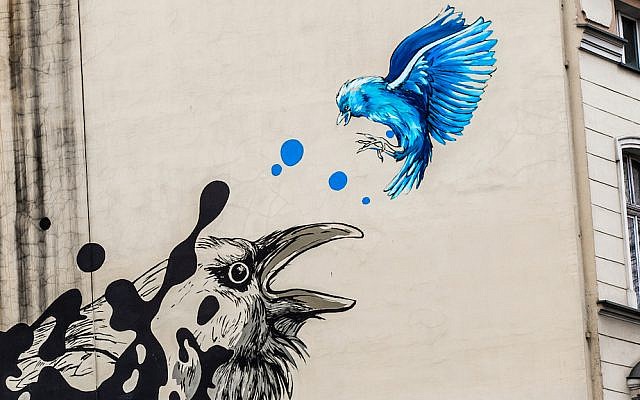 There is just a little bit of Jewish history in Lodz.

Artur Rubinstein, the great pianist, was born in Lodz, and so was the composer Aleksander Tansman and the poet Julian Tuwim.

The city had its own Jewish drama companies: Lodz is where Moyshe Broderzon established the Ararat Theater.

The first Jewish high school (gymnasium) in the Russian Empire was built in Lodz in 1912.

There were also some modest shuls: 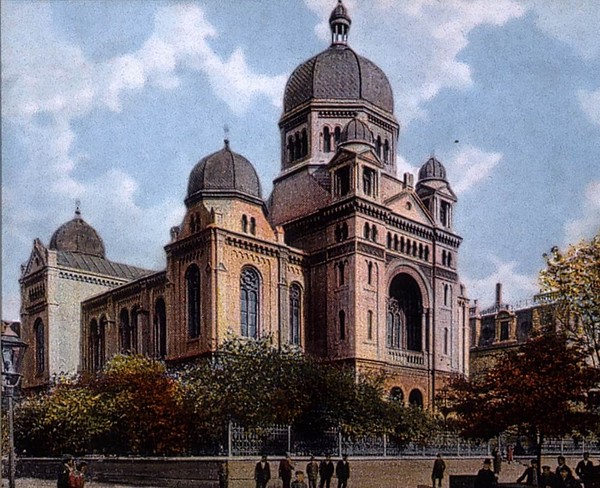 The Great Synagogue of Lodz, strictly speaking a Reform temple, built in 1881. The synagogue was burned to the ground by the Germans on November 14, 1939, along with its Torah scrolls. (Wikipedia)

Of course, Lodz as people remember it is a 19th-century phenomenon.

Before that the place was a Whoville.

In 1793, the year Poland was sliced up by its neighbors and vanished from the map, there were 11 Jews in Lodz, according to my Encyclopaedia Judaica.

But after the town came under Russian control in the wake of the Congress of Vienna, Lodz began to boom.

As in Manchester, cloth made the town.

The first cotton mill opened in 1825, and in 1839 the first steam-powered factory in both Poland and the Russian Empire. In that year, over 78 percent of the population was German. But folks were coming in from all over.

Jockeys and journeymen and meisters and machers from all over Europe transformed Lodz into the boll-and-bobbin Olympus of the Russian Empire — which started in Poland, went down to Odessa, and ended in Alaska.

Germans called the place Lodz, then later Lodsch and, under the Nazis, Litzmannstadt.

The Poles called (and still call) the city Łódź. Theirs is the only language in which the word has meaning. Łódź (pronounced: “woodge”) means boat.

And a boat is on the town seal: 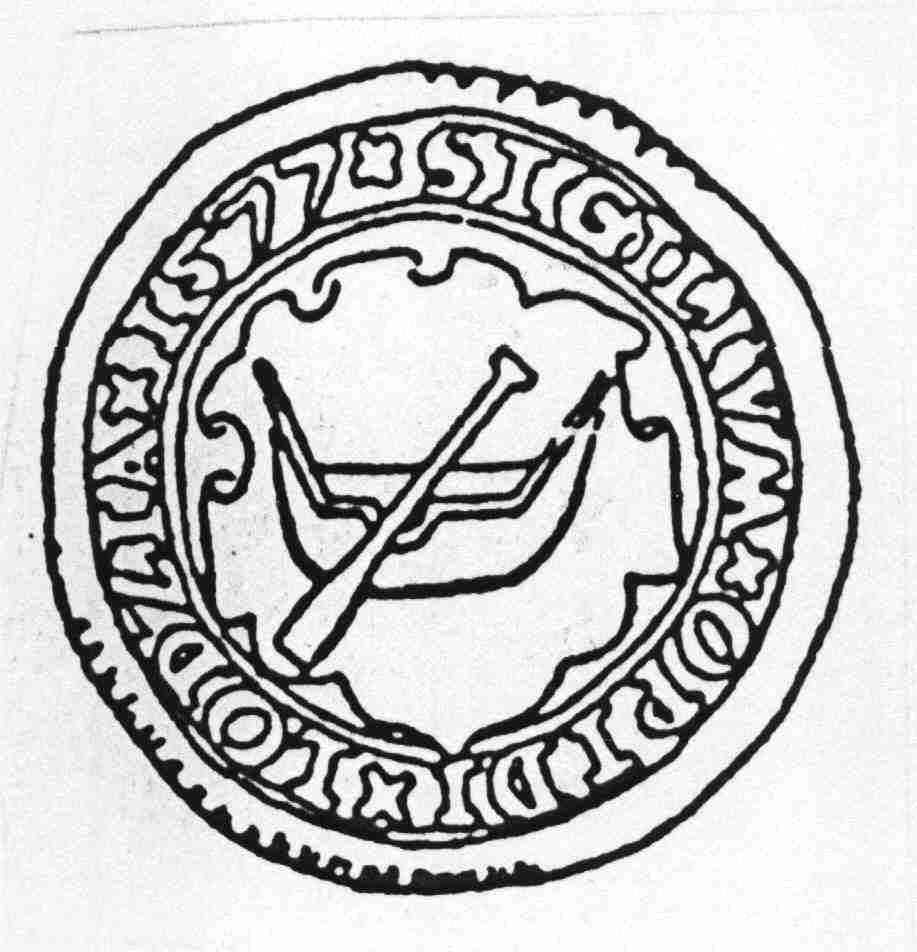 To many Jews this seemed a worthy vessel.

The atmosphere was hectic, wild and electric. People called Lodz ziemia obiecana — a “Promised Land” in the middle of Poland.

By the way, the Nobel Laureate Władysław Reymont wrote a book by this title in 1899. Its protagonists are Karol Borowiecki, a Polish nobleman, Max Baum, a German, and Moritz Welt, a Jew.

This being Lodz, the three go into business together.

(Andrzej Wajda, a graduate — along with Polański and Kieślowski — of the famed Łódź Film School, made a film of “The Promised Land” in 1975. The material holds up, and Nazis and Communists can jump.)

In wartime, Lodz was superlative, too. Its ghetto was one of the worst.

Chaim Rumkowski had directed an orphanage before the war. The Nazis made him the master of Jews. In the ghetto he was called “King Chaim” and made monuments and postage stamps in his own tortured image. 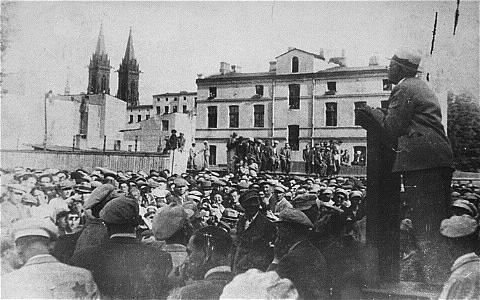 He committed a speech known now by its refrain: “Give me your children” — and so, by the ministrations of the sometime pedagogue, 20 thousand children were sent to a camp to die.

The King himself was murdered at Auschwitz. But by Jews. Sonderkommandos dealt death to Chaim the minute the Germans took him off the throne.

The Communists kept the textile mills churning while their rule endured, but in the 1990s everything collapsed. 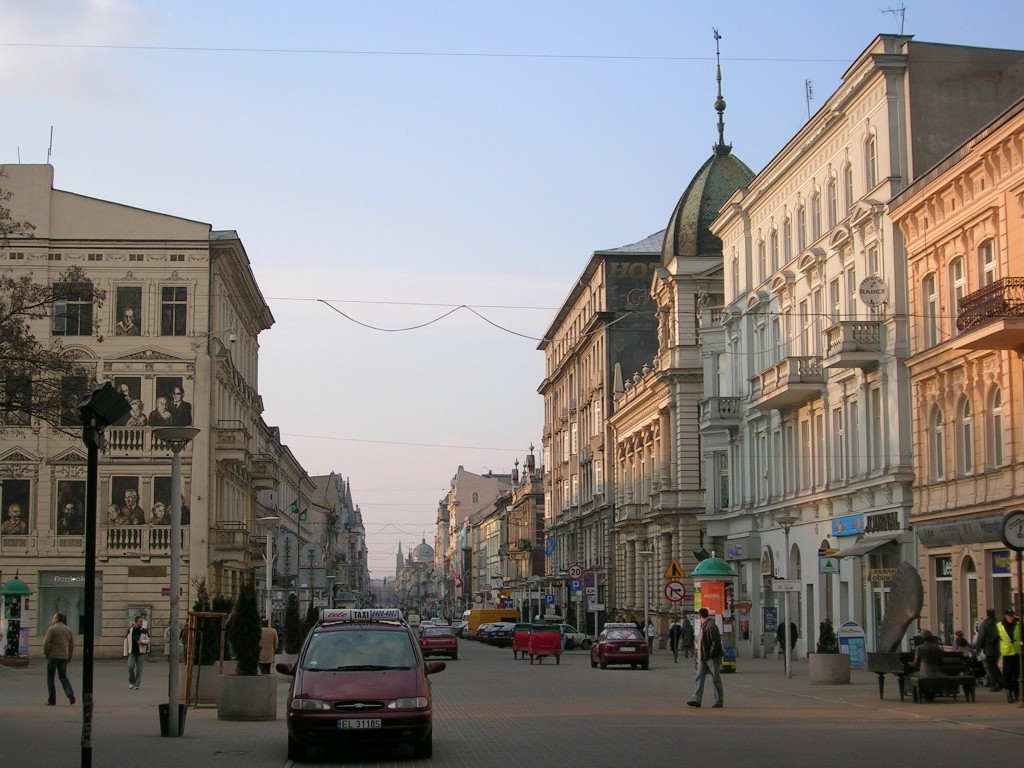 Piotrkowska Street in contemporary Łódź. A bronze statue of Łódź native Artur Rubinstein, complete with bronze piano, can be seen on the right. Wikimedia.

(There is a modest Orthodox community led by Symcha Keller.)

Many reports show residents of Łódź earning less than those of any other big city in Poland.

It was an odd choice. We had never been there before.

But, with help from local people and the local church, the Dominicans turned an old tenement house into a priory — with a chapel built specially inside.

From the street, it doesn’t look particularly holy. More like an old bank.

But a lot of holy stuff goes on here, especially lately. 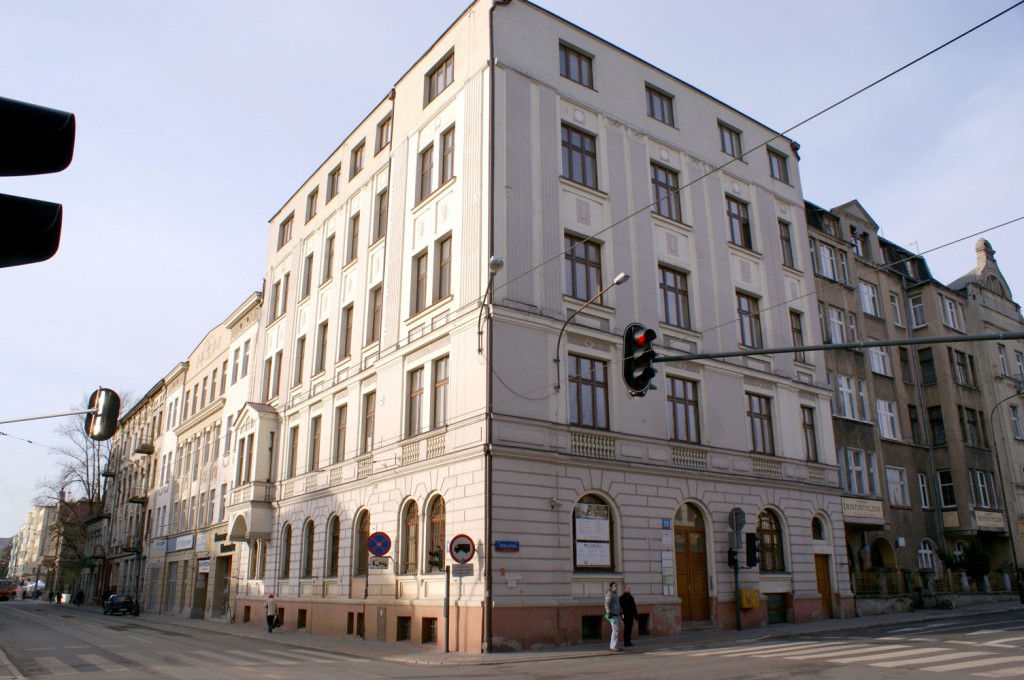 It’s holy to give people hope. And over the past year, that’s what the Dominicans and their friends in Lodz have tried to do — in a spectacular way.

2016 marked the 800th anniversary of the founding of the Dominican Order by Saint Dominic, a Spanish priest.

Jews who know their history may have mixed feelings about Dominic.

But for us Dominicans it was, obviously, a year to celebrate — though there were comme-il-faut expressions of repentance for the sins of the Order, too.

And how did the celebration come to Łódź?

On a boom lift.

Because of the Film School and because of the low rents and — probably — due to the evocative atmosphere of general decay, Łódź has become an artists’ haven in recent years. Sort of a Soho or a Williamsburg or a Montmartre, depending on your decade.

And with all the blank dumb dirty walls on odd-shaped old buildings, the mural has become a preferred form of expression.

Murals have the added benefit of sprucing the joint up.

The Dominicans decided to sponsor seven murals for Łódź to mark the 800th birthday of the Order. They’re not all finished yet.

For a very hi-res photo of this mural, click here. “The Vision of Saint Dominic” located in Lodz at ul. Pomorska 22. Mural designed by Paulina Nawrot and Ola Adamczuk, photo by Kamil Holwek. All photos of murals in this post are used by written permission of Ola Adamczuk on behalf of the Vera Icon Artists’ Group (veraicon.com.pl).

In this huge work, a flock of birds flies out in all directions from an a orange tree. (The orange is a symbol of Dominic.)

They’re wildly diverse: an owl, a flamingo, a parrot, a goose.

They are totally alive.

A (relatively) little figure of Dominic stands in the far right corner, watching them go. A dark forest — the world — is all around.

This comes from a medieval legend about Saint Dominic recorded by his successor Blessed Jordan of Saxony in what is called the Libellus or “A History of the Beginnings of the Order of Preachers.”

Jordan describes how “the man of God, Dominic… in a vision had been shown a tree, majestic in height and beautiful in appearance, in whose branches a large number of birds dwelt. The tree was cut down and the birds nesting in it flew away” (Libellus, 46).

Dominic sent the new Dominican brethren away from their cozy community and out into the world, two by two, about six months after the Pope officially established the Order.

It’s a strange and daring move for a young movement.

But this event is emblematic for the mission of the Order: to go to the ends of the world to preach God’s love to man. 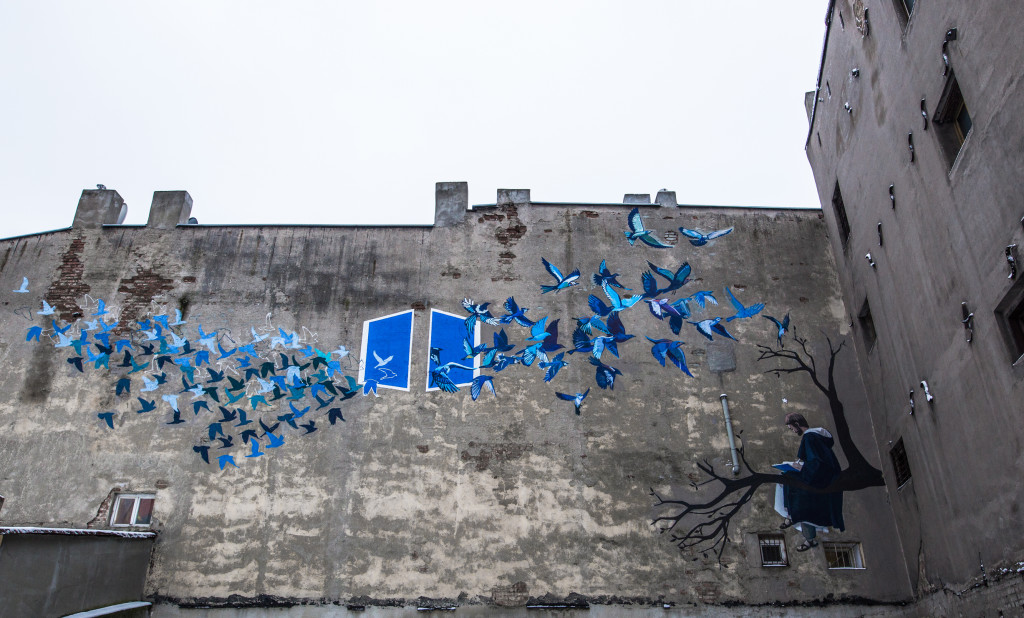 For a very hi-res photo of this mural, click here. “Contemplation” located at ul. Wólczańska 27 in Lodz. Designed by Paulina Nawrot. Photo by Kamil Holwek.

In this mural, the birds are back, but in a new scenario.

A pair of open windows represent “contemplation” — the direct personal encounter with God that usually happens in silent prayer or focused study.

It’s a thing in the Order: an old slogan says that our mission is “to contemplate and share with other the fruits of contemplation.” It sounds snappier in Latin.

Contemplation: the birds on the left enter “contemplation” through one window. They are undifferentiated cut-out shapes.

But when they fly out — on the other side of contemplation — each bird is truly itself. They’re different — we distinguish the jay from the swallow and the wren. They are one flock.

Dominic perches on a branch, taking note of it all.

For a very hi-res photo of this mural, click here. “Eagles” located at ul. Próchnika 15 in Lodz. Designed by Karolina Tłuczek and Konrad Koch. Photo by Kamil Holwek.

The birds are flying, always. Our style of life is not connected to any one place.

(The Dominican publishing house where I work in western Poland is called W drodze, meaning “On the road.” It’s not a Kerouac reference.)

This mural uses a black raven to symbolize evil or the yetzer hara. A plucky bluebird embodies daring or courage — our will to fight against it: 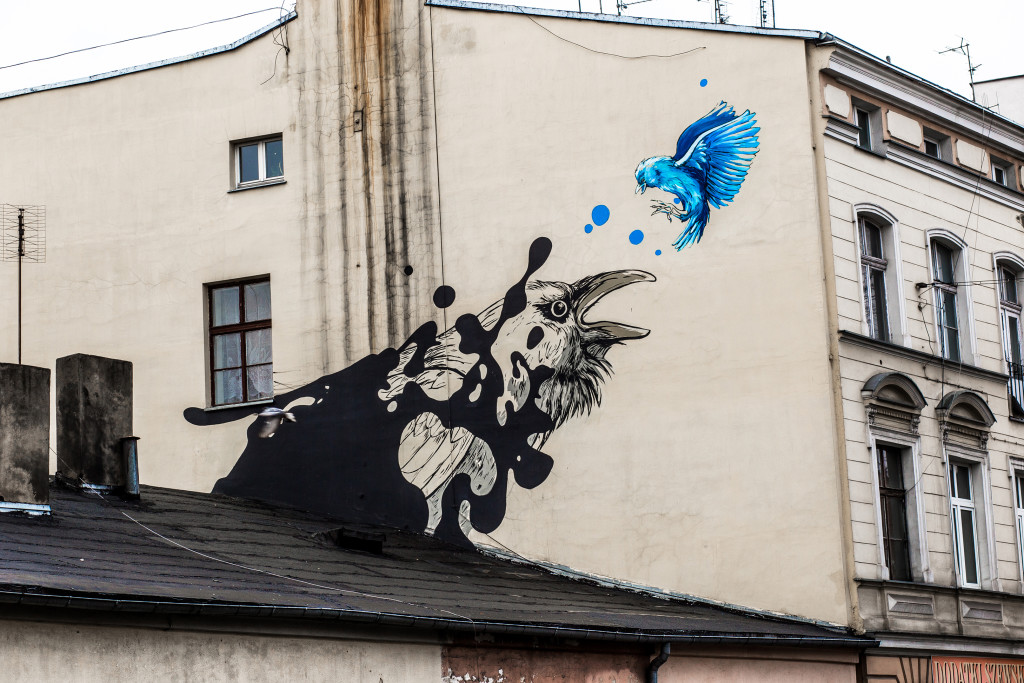 For a very hi-res photo of this mural, click here. “The Black Raven” located in Lodz at ul. Żeromskiego 31. Designed by Małgorzata Wysocka. Photo by Kamil Holwek.

The Dominicans didn’t do these paintings by themselves. My friend the Dominican priest and painter Tomasz Biłka was involved, but so were many: Małgorzata Wysocka, Karolina Tłuczek, Konrad Koch, Paulina Nawrot, Ola Adamczuk and others designed these works.

Others helped paint them, high on cherry-pickers.

The artists form a loose collective. They call themselves “Vera Icon” — a weird Latin-Greek collision of a name that could be translated as “True Image” (the Greek εἰκών or eikōn means “image”).

Who are they? They say: “We are a group of young people — Catholics — who graduated from Academies of Fine Arts in, among other places, Krakow, Łódź and Wrocław, or who belong to other creative circles in Poland. Together we are the Vera Icon Artistic Group.”

Sort of like the Power Rangers, but with paint.

And their excellent (but all in Polish) website shows that murals aren’t the only thing the Vera Icon folks get up to.

What does all this have to do with good old Lodz?

Maybe it’s about inhabiting history, and doing so with éclat and b’simcha.

Americans generally — and in Poland I think of visiting American Jewish “heritage tourists” more especially — often imagine that “historical” sites should be roped off in velvet and framed under glass.

For so it is in America: see Lincoln’s balcony at Ford’s Theater or the museums at Monticello or Mount Vernon — or even the old Italian fruit-warehouse district in my own beloved Milwaukee that is now marked off with triumphal archways announcing “Historic Third Ward.”

In Poland (as in Israel) you’d be hard pressed to find a building — or a curbstone or a picnicking spot — that is not “historic.”

So we don’t squint at history through a lorgnette. We inhabit it.

But think now of the Jews who built Lodz.

Of Izrael Poznański, the industrialist, or Adolf Zeligson, the architect who built Poznański’s palace. (They both lie in the Łódź cemetery still today.)

Think of the creative minds of a Broderzon or a Rubinstein.

What would they have us do?

Build, and rubble be damned. Paint, even on an ugly gray canvas. Create the new upon the old so that tomorrow may be different — better. 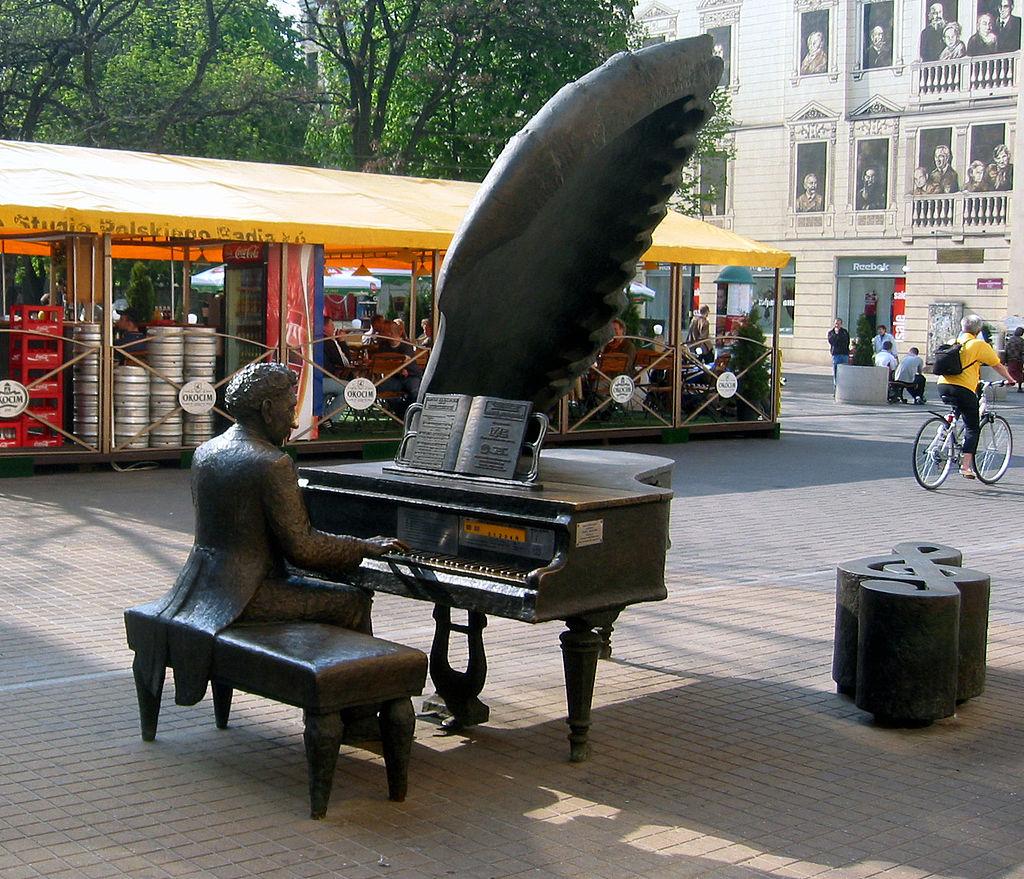 Sculpture of Artur Rubinstein (and winged piano!) on Piotrkowska Street in Łódź, where Rubinstein was born and raised. Wikipedia.
About the Author
Born in Wisconsin, Erik Ross is a priest of the Dominican Order who lives in Switzerland and comes often to Israel. For many years, he was stationed in Poland. He has long been active in Jewish-Christian conversations. He writes here with the permission of his major superior.
Related Topics
Related Posts
Comments