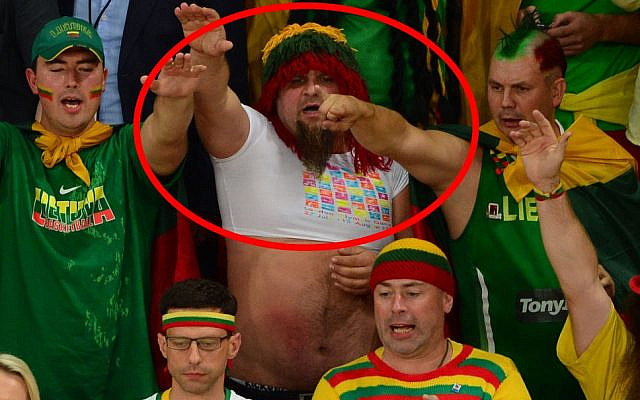 Photograph from Google images marked free for public use.

Lithuania is about the most ethnically pure country in the world. They have almost zero diversity. However, this past week, young Lithuanians showed they care about Black Lives. On June 5, approximately 1,000 youthful demonstrators took to Lithuanian streets to show their support. Their support for those racially different surprised people worldwide who never expected encouragement of diversity. After all, Lithuania is a country where members of Parliament are able to openly throw the Nazi salute without objection or consequence. 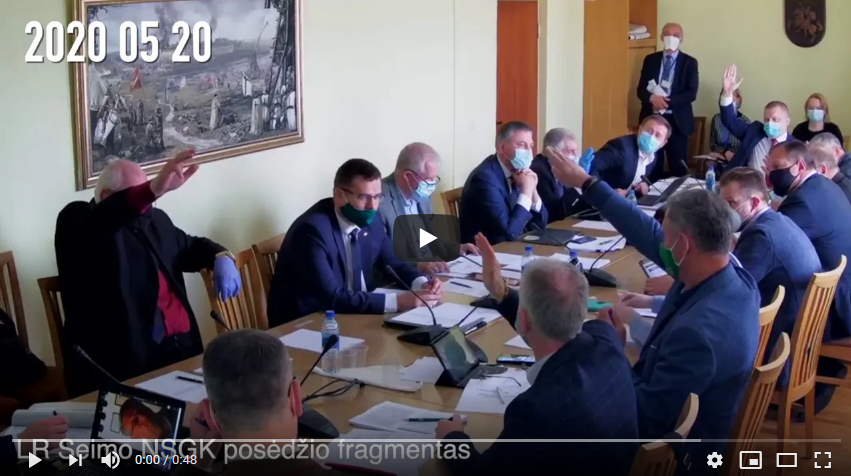 MP’s identified as Arūnas Gumuliauskas and Audrys Šimas throwing the Nazi Seig Heil salute in a Parliamentary meeting of the National Security and Defense Committee on May 20, 2020 (Photo from Lithuanian Government feed. Free for public use.) 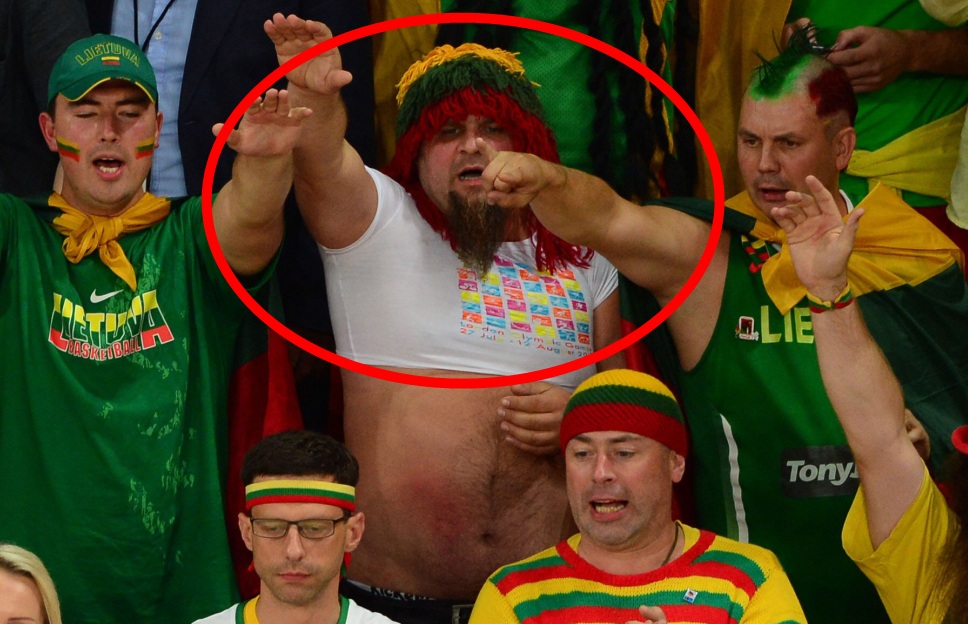 Photograph from Google images. Free for public use.

In the capital city, Nazis march openly and freely. 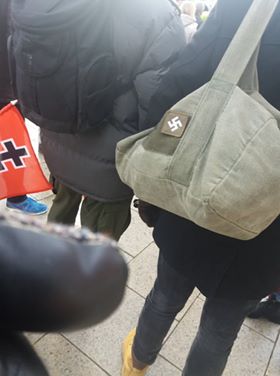 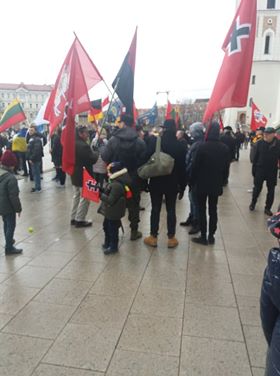 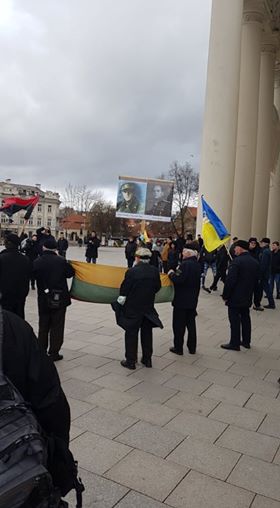 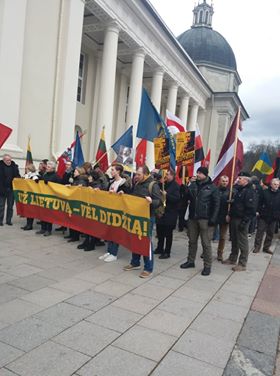 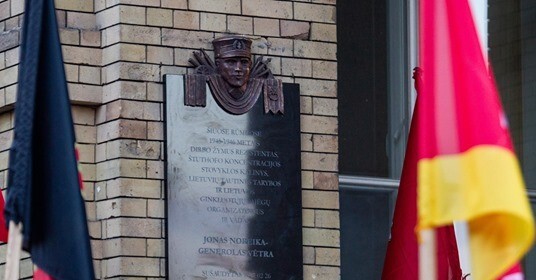 The government of Lithuania is deeply involved in Holocaust revisionism and considers Holocaust perpetrators as their national heroes.

Lithuania states they have banned Communist and Nazi displays, but if the demonstrations are pro-Nazi, they seem never to be prosecuted, or cause official concern. 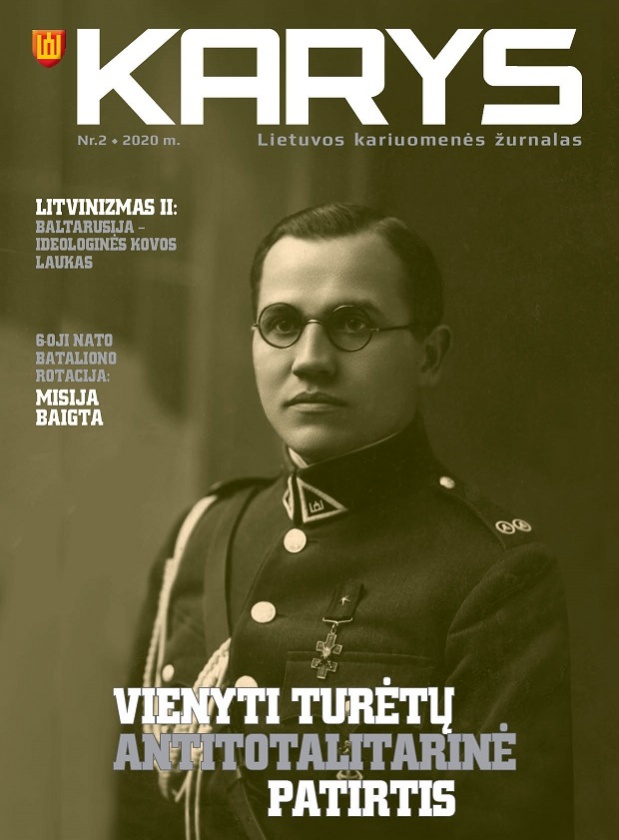 Skirpa famously stated in his “Instructions for Liberating Lithuania,” March 24, 1941:

For the ideological maturity of the Lithuanian nation it is necessary to strengthen anti-Communist and anti-Jewish actions and to unconditionally spread the idea that the Russian-German armed conflict will truly happen. The Red Army will be quickly driven from Lithuania, and Lithuania will become a free and independent state. It is very important at this opportunity to also shake off the Jews. Therefore, we need to create in the land such an oppressive atmosphere against the Jews that not a single Jew would dare to even allow themselves the thought that in New Lithuania they might still have even minimal rights and or any possibilities for making a living. The purpose is to force all Jews to run from Lithuania along with the Red Russians. The more of them that leave, the easier it will be to finish ridding ourselves of Jews.

At the time of this statement Lithuania had a population of about 250,000 Jews. Today, there are approximately 3,000 Jews remaining in Lithuania, Skirpa’s efforts achieved a 99% reduction of Jewish lives in Lithuania. No wonder he remains a primary national hero.

There are almost no black people in Lithuania, and few will even travel there as tourists. Some black tourists who have visited, have told me that local Lithuanians stared at them almost as if they were circus freaks. The sight of a black person in Lithuania is certainly a most unusual occurrence.

The Government of Lithuania has worked diligently to teach nationalism and ethnic pride to their youth, with a falsified history. This history contradicts the message of the suffering of others, such as Jewish Lithuanians who were primarily murdered by their ethnically pure Lithuanians neighbors.

To the best of my knowledge, Lithuania has never held an anti Nazi march, nor has there ever been any demonstration against the government for glorifying the murderers Jews. That would hit too close to home. It is much easier for them to march for a problem that is thousands of miles away. The 99% elimination of Jews elicits barely a word. ONE Lithuanian, Stanislovas Tomas, smashed a public monument for a Nazi murderer; this earned him a prison sentence of 90 days. And a fine of 2,242 Euros.

The police are not disturbed, and make no arrests for Holocaust denial, nationalist marches, the Nazi salute in Parliament, or Nazi parades, yet, the BLM protest presents a dilemma to the national authorities. Some protestors carried placards with swearwords, such as “f**k the police”. The Lithuanian police deemed this a public order violation, and are investigating the filing of charges against those holding the placards.

Perhaps the police authorities took a leap of imagination: If Lithuanian youth find the oppression of black people in America troubling, they might find conditions against the memory of Jews in their own country disturbing. The marches for black civil rights presents a dangerous new trend of liberalism among the youth that could disrupt the old order.

Police Commissioner General Renatas Požėla said: “We want people to express their beliefs in a peaceful and reasonable way – without using such epithets and insulting institutions or specific officers, or, even worse, using violence,”.

Parliamentarians throwing the Nazi salute do not fall under those same standards, and Nazi marchers also do not provide insult to Lithuanian values.

Lithuanian authorities regularly showcase their values through actions and conduct; it is unfortunate that their public words contradict their actions. They would like us not to believe our eyes, just to accept their silken words at face value.

We understand with clarity what we see with our own eyes.

At a time when other countries are removing monuments for civil rights perpetrators, Lithuania is the only country in the world that has gone to Court to defend the good reputation of their Nazis, and even falsified USA Congressional statements to make heroes of others.

The 1,000 Lithuanian marchers displayed extraordinary courage to say that their society should care about others who are not purely ethnic Lithuanians. May these 1,000 youth go from strength to strength.

On June 19, “Patriotic Lithuanians” will march in Vilnius in protest against the Black Lives Matter demonstration. They will carry banners glorying Nazi Holocaust perpetrators. Lithuanian authorities found the BLM posters offensive, let us see if they will respond similarly to Nazis.

Source: Facebook.
https://www.facebook.com/groups/298348657469734/permalink/632572404047356/
About the Author
Grant Arthur Gochin currently serves as the Honorary Consul for the Republic of Togo, and as Vice Dean of the Los Angeles Consular Corps, the second largest Consular Corps in the world. He is the Emeritus Special Envoy for Diaspora Affairs for the African Union, which represents the fifty-five African nations. Gochin is actively involved in Jewish affairs, focusing on historical justice. He has spent the past twenty years documenting and restoring signs of Jewish life in Lithuania. He has served as the Chair of the Maceva Project in Lithuania, which mapped / inventoried / documented / restored over fifty abandoned and neglected Jewish cemeteries. Gochin is the author of “Malice, Murder and Manipulation”, published in 2013. His book documents his family history of oppression in Lithuania. He is presently working on a project to expose the current Holocaust revisionism within the Lithuanian government. He is Chief of the Village of Babade in Togo, an honor granted for his philanthropic work. Professionally, Gochin is a Certified Financial Planner and practices as a Wealth Advisor in California, where he lives with his family. Gochin blogs at Times of Israel at: https://blogs.timesofisrael.com/author/grant-arthur-gochin/ Personal blog: www.ggochin.wordpress.com Personal site: https://www.grantgochin.com/ Silvia Foti’s Storm in the Fatherland: A Memoir Unmasking a War Criminal will be published by Harper Collins in Spanish later in 2020 and by Regnery History in English in 2021.
Related Topics
Related Posts
Comments