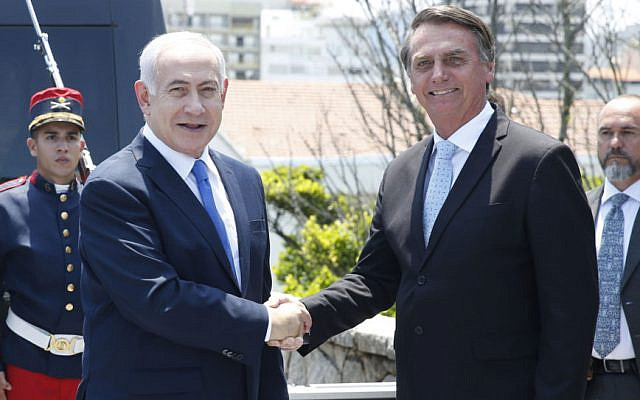 “I thank Benjamin Netanyahu, my great friend, for the great work we were able to develop together to strengthen the partnership between our countries and promote the well-being of our peoples. I’m sure that luck and his immense talent will not be absent in this new stage [of life]”, wrote Bolsonaro on Facebook and Twitter.

The message continued, saying “I also welcome the new Israeli government and wish Prime Minister Naftali Bennett and Foreign Minister Yair Lapid, on the success of their elections and the formation of their government. Rest assured that Brazil will keep supporting Israel and the Jews”.

Netanyahu was at Bolsonaro’s nomination in January 2019 and received the visiting Brazilian leader in Israel in March of the same year.

On different occasions, Bolsonaro expressed his admiration for the Israeli people and promised to move the Brazilian embassy to Jerusalem before the end of his term as president of Brazil.

About the Author
Jarbas Aragao is a Brazilian and US educated writer. He has worked as a translator and journalist. Also graduated in Theology, he runs Gospel Prime one of the biggest Christian News websites in Brazil. He is also a regular contributor to CBN/Mundo Cristiano.
Related Topics
Related Posts
Comments
Advertisement