There’s a famous Yiddish expression men shtarbt nisht fuhn ah kasha, roughly translated as “no one ever died from a tough question”. Judaism views doubt and questions as positive, as they can be mechanisms that lead a person to greater spiritual growth.

While that saying is true in certain contexts; when it comes to dealing with contradictions and challenging questions in the Bible, many people unfortunately haven’t taken the time to determine what the true answers are. Often these unresolved questions or unsatisfactory and unfulfilling answers will lead them to abandoning any future interaction with the sacred text.

In a fascinating new book, Between the Lines of the Bible: Genesis: Recapturing the Full Meaning of the Biblical Text (Urim Publications ISBN-13 978-9655242003), author Rabbi Yitzchak Etshalom has written an engaging work that provides significant new insights and a fascinating approach to the Biblical text. The book is a pleasure to read and the reader is certain to come out with significant insights to the text. 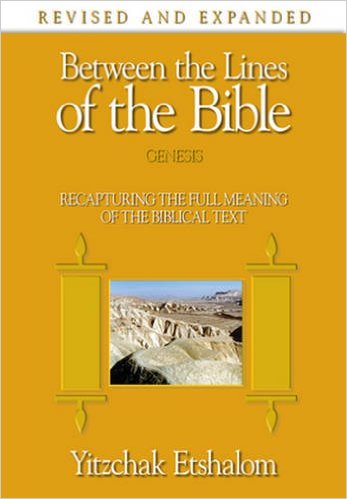 From its opening paragraph, the Bible is fraught with seeming contradictions. Julius Wellhausen created his documentary hypothesis about 140 years ago as an attempt to reconcile inconsistencies in the Biblical text. Etshalom shows how commentators and teachers of the Bible have been aware of these inconsistencies since time immemorial. While the book is not meant to be a direct critique of the Bible critics, Etshalom shows on many instances the vacuousness of their arguments and methods.

Etshalom builds on parshanut; which one aspect of it is a method that allows a deeper read of the text, often the rephrasing or translation of the text into simpler and more easily understood terms. This can often rectify these supposed contradictions. Given the text of the Bible is often stark and terse; parshanut is a powerful method for textual understanding.

Etshalom also makes ample use of various aspects of an academic approach where it lends itself to a better understanding of the text. This includes diverse domains such as anthropology, literary analysis, archeology, philology and more, to analyze the textual difficulties. The truth is that this approach is not so revolutionary, and has in fact been used since the days of the medieval commentators.

In this volume, Etshalom has 26 essays on the book of Genesis that provide a dramatic new look to the Genesis narratives.

In the first chapter, he deals with the problem of seemingly two contradictory creation stories of Adam. He writes that the Bible is not telling us two conflicting versions of the creation narrative. Rather it is two aspects of the same story. Etshalom writes that the dual narrative is meant to show that the world is an orderly place of hierarchical systems, where Man is the ultimate creature. Yet the world is also a place where Man feels alien and distant, seeking out companionship and meaning in his relationships with fellow humans, with a made, and with God.

Etshalom is a big fan of archeology and linguistics. He writes that in the last 200 years of Biblical archeology, archeologists have unearthed significant findings in the areas between Israel and Mesopotamia. As to linguistics, he provides numerous examples of linguistic differences that can help the reader discover the underlying differences that can explain variations that often lead to contradictions.

Another example of Etshalom digging between the lines of the text is the story of Jacob’s gift to his brother Esau. Etshalom first details the four main types of livelihood in the Levant during the biblical period, and then details the different roles of animals at the time. By integrating these two seemingly irrelevant areas, Etshalom gives the reader a much deeper and more meaningful understanding to the narrative.

For the serious reader, Between the Lines of the Bible: Genesis: Recapturing the Full Meaning of the Biblical Text is a significant contribution to anyone who wants to have a deeper and more fulfilling understanding the Bible.