After the Chumash (Bible), the Talmud Bavli (Babylonian Talmud) is the most important and central text in Judaism. While the Chumash is generally readily understood by one with a basic understanding of Hebrew; deciphering the Bavli is a formidable challenge that has frustrated many of those who study it.

With its heavy use of Aramaic, combined almost arbitrarily with Hebrew, lack of any sort of punctuation or formatting, commingled with its extraordinarily terse style; makes grasping and understanding the Bavli a significant endeavor, and an often frustrating one at that for the novice.

In Charting the Sea of Talmud, Dr. Yisrael Ury, a physicist by profession, has created a system of visual methods for easier understanding and summarization of Talmudic discussions, conclusions and laws. 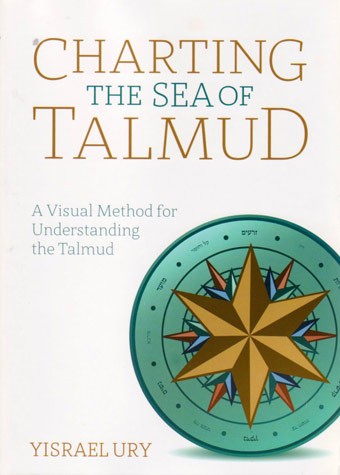 The frustration felt by many who learn the Bavli is often not an issue when using an Artscroll translation, and is not really solved by this book. Where the book provides significant value is by providing a visual aid to assist in deciphering and following the Talmud’s logic. Understanding the logic and logical flows is essential to understanding the Talmud itself. Those that understand the language of the Talmud but not its logic are left with a highly incomplete understanding.

Since seeing is often synonymous with understanding, the visual process via the Talmud Diagrams is an excellent way to convey information. Many people, if not all, are able to process complex information substantially faster with visual assistance than without.

Via his diagrams, Ury has created an effective and valuable system that visually represents the underlying logic of the Talmud. That is quite beneficial, since the logic of the Talmud is often the hardest part to understand. The book notes that diagrams become quite helpful when two or more factors determine an outcome, which occurs regularly in the Talmud.

When one puts two diagrams with the different factors together, it becomes much easier, and immediately clear what the difference between the two are.

Another advantage of using diagrams and expressing ideas in the language of diagrams is that the Talmudic sugya (topic) can be condensed into a very small space. This makes it much easier to understand the sugya and much easier to remember.

Ury makes it eminently clear that his diagrams are meant to complement the study of the Talmud, not be a replacement for it. The book is a fantastic reference for those that are looking for an aid in their Talmudic studies, those teaching an introduction to Talmud class, or anyone in between.

The only issue I have with the book is that at under 150 pages, it may be a bit too brief, and would have been better served had a number of additional examples been given. Additional pages would have been beneficial in that they would have better enabled the reader to determine the appropriate methodology for charting diagrams on their own.

Readers that want an advanced taste of diagramming can view 4 videos from Ury here.

Many aids to Talmud study have come out in the last decade. Web sites such as Gemara Sedura and Gemara Berura are invaluable to those that want to develop skills to master the Talmud. Ury’s book is a welcome addition to this trend.

Those looking to better understand the Talmud will certainly find Charting the Sea of Talmud a worthwhile reference.