Rabbi Moses ben Nachman (Nachmanides), was one of the greatest sages in Jewish history. When he was nearly 70 years old, he was placed in a difficult and somewhat untenable situation. Called to Barcelona, he had to defend his Jewish faith in a Catholic dominated country, summoned by a Catholic king who was raised by and had loyalty to Pope Innocent II. While he was given full reign to defend his faith, Nachmanides knew the reality was such that he could easily have won the battle, but lost the war. Which is precisely what occurred.

Many English readers know of Nachmanides own account via the 1983 Charles Chavel translation of The disputation at Barcelona. In an interesting new book Debating Truth: The Barcelona Disputation of 1263, A Graphic History (Oxford University Press 978-0190226367), author Nina Caputo (Associate Professor – Department of History at the University of Florida) has written not only an updated translation of Nachmanides account, but that of interlocutor also. More interestingly, the book provides a fascinating overview of the times and circumstances which lead to the disputation. 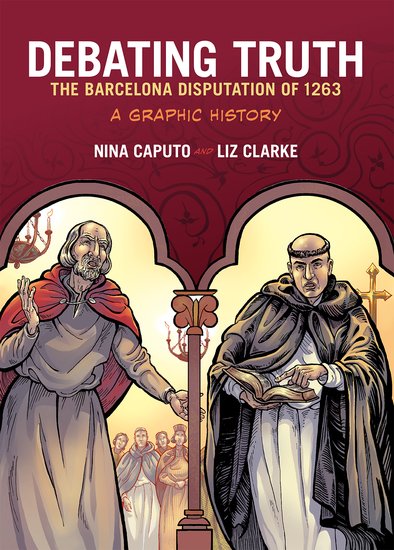 As to A Graphic History, that refers to the first part of the book which uses about 70 pages of illustrations (superbly done by Liz Clarke) to provide a deeper narrative to the story. Caputo writes that while illustrations provide additional depth to the story, it comes with its own unique set of challenges; mainly as how the character is portrayed can change the nature of the story. One thing I noticed that amongst the many illustrations, Nahmanides is never pictured wearing a skullcap. That striking absence is not explained.

The disputation of 1263 found Nahmanides summoned from his residence in Girona to Barcelona at the request of King James I of Aragon to debate with Paul, a Dominican Friar and lapsed Jew, regarding the Messiah in Judaism and Christianity. The debate was before a panel of judges lead by James. While James gave him liberty to speak as he wished, Nahmanides was understandably hindered by the concern of offending the Christians, and the serious repercussions that would bring.

Caputo writes that disputations traces its roots as a philosophical form back to classic antiquity. Works by Plato and Aristotle use the dialogue form, as it is both pleasing and a compelling means of demonstrating the power and agility of a disciplined human intellect.

As to the reason for the Barcelona disputation; members of the Dominican and Franciscan mendicant orders made extensive use of disputation in their campaigns to eradicate heresy. It’s not ironic then that these same mendicant orders accused Nachmanides of blasphemy when he later wrote his account.

The book notes that while disputations were often intended as a missionary tool, they were an overall failure. Many who converted during those times did so not due to theological issues or that the disputation arguments persuaded them. Rather they converted due to the fact that circumstances of Jewish life had become untenable. That is similar to the thesis of Leaving the Jewish Fold: Conversion and Radical Assimilation in Modern Jewish History (Princeton University Press, ISBN 978-0691004792), by Todd Endelman.

In translating Friar Paul’s account, Caputo astutely notes that while he and Nahmanides agreed on the overall notion of the disputation, the two narratives told opposite stories. Nachmanides account showed that he had won the debate and left with a cash gift from the king. While Paul’s account said that he was utterly defeated.

Caputo also writes of scholars such as Heinrich Denifle who felt that Nachmanides account of the disputation was meant to mask the fact that he failed miserably in his task. Denifle also critiqued Heinrich Graetz in that he didn’t take into other sources, or accept Friar Paul’s interpretation of the Talmudic passages in question.

It’s incredulous on the part of Denifle to think that Friar Paul’s poorly constructed Talmudic interpretations actually had merit. It’s fair to say that when summoned to Barcelona and authorized to speak freely, Nachmanides clearly knew that it was a Hobson’s choice and even if he did fail miserably in his task as Denifle thought, it’s simply that it was not a level playing field.

Denifle saw these disputations as similar to the Lincoln–Douglas debates. The reality is that it would be appropriate to switch James I to Kim Jong-un and Barcelona to Pyongyang, to understand the reality that Nachmanides faced.

The milieu in which the disputations occurred shows the depth of the interfaith hostility that in the medieval Crown of Aragon. For the Jews, any disputation was an unwelcomed disruption that challenged the community’s sense of place and security. But Caputo notes that conversely, the fact that these disputations were able to take place, showed a very high level of social and cultural integration of Jews is a Christian society.

Caputo has created a work that is intellectually fascinating and visually stimulating. By using the text of the disputations as the background, this is a most interesting book that details the events that lead to summoning Nachmanides to Barcelona, the disputation, and his ultimate exile from Aragon.