The period of the Geonim dates from roughly 600 CE to 1040 CE. The Geon was the head of the Sura and Pumbedisa yeshivas in Babylonia, and was the de facto spiritual leader of the worldwide Jewish community. Much of the Geonic period is shrouded in mystery. In fact, it’s unclear just how the Geon was elected in the first place.

Sa’adyah Gaon was arguably the greatest of the Geonim. And in a remarkable biographical work appropriately titled Sa’adyah Gaon, Robert Brody, professor of Talmud at the Hebrew University of Jerusalem, provides a fascinating overview of his life, the challenges he faced, battles he fought, and how his influence is still felt today. Just how great was Sa’adya? Brody quotes no less than Abraham ibn Ezra who referred to him as the chief discourser everywhere (ראש המדברים בכל מקום), a Rabbinic idiom meaning that his opinions should be the starting point for any intellectual discussion. 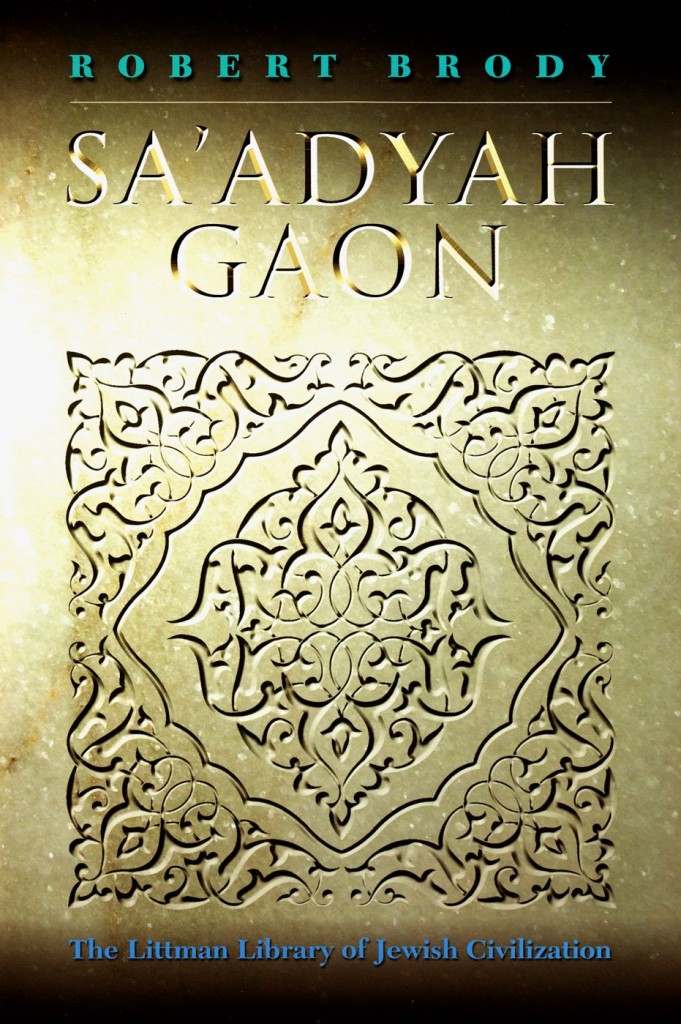 Sa’adyah was the most influential rabbinic personality of the Geonic period whose broad influence on the development of the Jewish tradition is still felt today. A biography of such a figure was much needed, and Brody’s work fills this lacuna.

The first chapter opens with an introduction to the Geonic period that provides a background to the milieu in which Sa’adyah lived.

A polymath of the first order, six of the eight chapters focus on the various subject areas on which Sa’adyah wrote, namely with a focus on Sa’adyah as a philosopher, Biblical commentator, linguist, poet, man of Halacha and polemicist. Brody provides a meaningful overview of who Sa’adyah was, what he stood for, and the many battles he fought.

Looking at his life now, it’s quite easy to overlook what a trailblazer and revolutionary Sa’adyah was. Brody writes that as far as we know, the only literary activity in which the Babylonian Geonim before Sa’adyah’s time engaged in was the writing of responsa. Sa’adyah diverged from that path and we still have a large amount of his writings on myriad topics, though some have been lost.

Brody also interestingly notes that one of Sa’adyah’s significant departures from precedent was that he was the first to introduce the Jerusalem Talmud and aggadic midrashim to the literary world of rabbinic Babylonia.

Sa’adyah is perhaps best known for his theological battles with the Karaites. The book notes that he was certainly well suited to that line of activity, which demanded intellectual and rhetorical vigor and a powerful and combative personality.

It was that very personality that lead him to be elected as Geon, which is remarkable given his Egyptian birth. As the Geonate was traditionally left to native Babylonian scholars.

In addition, Brody pays special attention to the great calendar controversy of 922 with Aaron ben Meir of Eretz Yisrael, in which Sa’adyah prevailed. Sa’adyah’s victory was due in large part to the force of his personality, boldness, brilliance and sense of conviction. The calendar controversy arose in part due to the prolonged, and often fierce, rivalry that existed between the scholars of Babylonia and Israel. Much was at stake, as the Rabbinic leadership in Babylonia and Israel were in competition in general for influence over the Diaspora.

Brody lists over twenty books and treatises that Sa’adyah wrote, of which his most famous is Emunos ve-Deos (“The Book of Beliefs and Opinions”), composed in 933 CE. The theme of the book is his reconciliation of Jewish tradition and rationality.

Brody notes that Sa’adyah was so multifaceted that it’s impossible for any one person to do justice in a biography of Sa’adyah and evaluate the full extent and variety of his life’s work. Unfortunately, Brody exacerbates that given the brevity of the book, coming in at a scant 160 pages. One gets the feeling that Brody is holding back, and in this case, readers would appreciate much more details about Sa’adyah.

Sa’adyah was the type of brilliant individual that only comes along every few hundred years. Brody’s book, albeit a brief one, gives you a sense of who Sa’adyah was, and the impact of his works. It’s a fascinating work, about one of the most fascinating personalities in Jewish thought.