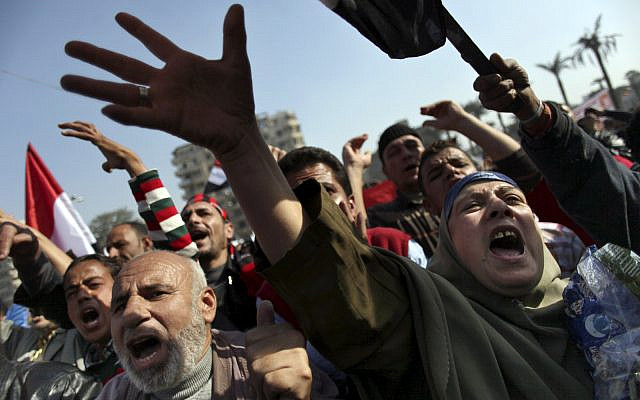 Last November, three dozen public figures from around the Arab world gathered in London to launch the Arab Council for Regional Integration – meaning, the integration of Israel into the Middle East. It was the first time in the history of the Arab-Israeli conflict that a pan-Arab group had formed for the sole purpose of ending the Arab boycott of Israel. The group included a Lebanese Shiite cleric, a Saudi publisher, a member of the Egyptian parliament.

For all the fear of an imperialist Iran, what really motivated them to take the great personal risk of publicly calling for normalization was the Arab world’s existential crisis. The collapse of the Arab spring, the self-devouring of Syria, the destruction of Yemen and Libya and Iraq – all convinced Council members that the Arab world’s decades-long obsession with Israel was poisoning their own societies with hatred and a conspiracy mindset, undermining their ability to deal with chronic problems. Ending its war against Israel, Council members said, was a prerequisite for the Arab world’s ability to heal itself.

The founding of the Arab Council was a harbinger for the regional transformation that became explicit with the stunning announcement of a peace agreement between Israel and the United Arab Emirates.

Shimon Peres’ optimistic pronouncement of a “new Middle East” in the 1990s turned out to be a delusion. Yasser Arafat was the nightmare partner, turning the peace process into war by other means. Peres’ new Middle East ended in the second intifada of the early 2000s, four years of the worst terrorism in Israel’s history that destroyed the Israeli public’s faith in the chances for peace. The Gaza withdrawal in 2005, followed by years of rocket attacks on Israeli communities, along with the Syrian civil war and other atrocities in the region, ended the dream of a transformed Middle East.

Today’s new Middle East is being born not out of hope but anxiety and despair. Still, for all those negative incentives, the results could be no less compelling than Peres’ vision.

I experience this new Middle East in my daily life. Two years ago, I published a book, “Letters to My Palestinian Neighbor,” that attempted to explain Israel and Zionism to my Palestinian neighbors. The book was translated into Arabic and made available to Arabic readers for free downloading. So far several thousand people – Palestinians as well as Arabs throughout the region – have downloaded the book. Hundreds have written me, sometimes with hatred, but also with reasoned disagreement and even appreciation.

As a result of those responses, I’ve been regularly Skyping and Zooming with readers across the Middle East: a student in Baghdad, a writer in Alexandria, a journalist in Kuwait City. I’ve encountered an almost desperate longing for normalcy – and the hope that connecting with Israelis may help the region to move on.

I have a team of young people – Palestinians and other Arabs – working to promote “Letters” in Arabic social media, reaching out to journalists and other thought leaders. Team members joined after they themselves read the book. Now, with the UAE announcement, the team is working overtime.

The emergence of new forms of media, along with growing desperation in the Arab world, has opened the way to unprecedented communication between Arabs and Israelis. In the era of social media, these connections cannot be suppressed.

Israelis need to appreciate this moment, and our responsibility to nurturing it. That means restraining settlement building and learning to speak to the Arab world not only in the language of deterrence and threat but also the language of outreach and reconciliation. Our enemies have hardly disappeared; we need to proceed with caution. Still, rising to this moment requires renewing our commitment to peace as a central Israeli aspiration.

2. Regional peace — including a Palestinian state?

The agreement between Israel and the UAE proves, as Egypt’s Anwar Sadat and Jordan’s King Hussein did a generation ago, that peace, however partial and inconclusive, cannot be held hostage to the Palestinian stalemate.

Still, there is no avoiding the necessity – for Israel’s sake – of an eventual two-state solution. This deal doesn’t change the fact that forcibly keeping several million people in a state of permanent limbo is a timebomb for Israel. Maintaining our two foundational identities – as a Jewish state, as a democratic state – depends on freeing ourselves from the untenable anomaly of the Jewish people as permanent occupier of another people.

Like most Israelis, I have despaired of the possibility of a bilateral Palestinian-Israeli peace agreement. Even if the leftwing Meretz party were running the Israeli government, I still don’t believe we would find a partner for reconciliation within the Palestinian national movement, which remains committed, in all its factions, to Israel’s ultimate disappearance. (Readers should turn to the superb new book by Adi Schwartz and Einat Wilf, “The War of Return,” which explains, better than any other I know, the reasons for Palestinian rejectionism.)

But the Israeli-UAE deal offers a glimpse into a tantalizing alternative: a regional solution that would include a Palestinian state. In truth, the Palestinians have nothing to offer Israel except promises of peace – and almost no one here believes those promises anymore. (Israelis and Palestinians have amply earned each other’s mistrust.) But a deal of normalization with the Arab world in exchange for a Palestinian state is an offer that many Israelis may find compelling.

As the region changes, it is no longer fantastical to imagine Arab states as our allies in helping ensure a Palestinian state that would abandon the irredentist ambitions of “liberating” all of the land between the river to the sea.

The 2002 Saudi Peace Plan supposedly offered that possibility. But the Saudi plan – released after the September 11 attacks and intended not for Israeli but American consumption – wasn’t a credible offer. The first problem was that it was presented not as an invitation to negotiations but as a take-it-or-leave-it diktat. And the plan insisted on Palestinian right of return – not only to a Palestinian state but to Israel.

A revised Saudi plan can be the basis for negotiations for a regional agreement.

3. How to Win Back the Israeli Public for Peace

Those advocating the boycott of Israel don’t understand that Israelis cannot be pressured into territorial concessions – not when they believe that a Palestinian state would threaten Israel’s ability to defend itself. But Israelis can be enticed into peace talks, not least by the recognition of our legitimacy.

Two historical moments prove this foundational truth of Israeli politics. The first occurred in 1975, when the UN voted to declare Zionism as a form of racism. An incensed Israeli public pushed back.

Three weeks after the Zionism is Racism resolution, the settlement movement organized a mass march into Samaria, the northern West Bank, setting up camp at an abandoned Ottoman railway station in Sabastia. Until that moment, every attempt by would-be settlers to establish a presence in Samaria was rebuffed by the Labor government, which sent in the army to uproot them. This time, though, the government hesitated, sensing that the Israeli public’s sympathy had turned toward the settlers. “This is the Zionist response to the UN,” a young Likud Knesset member named Ehud Olmert told a journalist.

The government relented and allowed a small group of settlers to remain. That victory is still celebrated by the settlement movement as its breakthrough moment. In large part, the settlers owed their victory to the UN.

By contrast, a majority of Israelis initially supported the Oslo peace process, in part because the international atmosphere toward Israel had changed. With the collapse of the Soviet Union, the entire former Soviet bloc and most of Africa established relations with Israel. So did India and China and the Vatican. Even the UN revoked the Zionism-racism resolution. Prime Minister Yitzhak Rabin told Israelis: We need to overcome the mentality of “the whole world is against us.” And the public, at least initially, responded. That willingness to suspend our deep skepticism and give Oslo a chance proved what is possible when Israelis stop feeling judged and maligned by the international community.

Those opposing normalization as a betrayal of the Palestinians have it backward: Only by easing the siege against the Jewish state are Israelis willing to consider territorial concessions.

The only pressure Israelis can’t resist is an embrace.

4. Pragmatists vs. ideologues: The divide within the right

Creating an Israeli majority for peace has always depended on accentuating the divide on the right between pragmatists and ideologues. The pragmatists are willing, if convinced the deal is credible, to trade land for peace. Those ideologues who believe Jewish claims to the land of Israel are paramount oppose concessions under any circumstances.

So far, the only leaders who gave up substantial territory and even uprooted settlements were from the right – Menachem Begin in Sinai, Ariel Sharon in Gaza. The cries of betrayal from settler leaders angry at the government for preferring normalization with an Arab country to annexing parts of the territories are true to long Israeli tradition. For peace to happen, the pragmatic right needs to betray the ideological right.

Once again, Benjamin Netanyahu proves that he is our most talented leader. No one on the current Israeli landscape comes close to matching his energy, his creativity, his ability to play in the global arena, his capacity to surprise.

And that is precisely our tragedy. Because no other Israeli politician has done more to incite hatred among Israelis, to undermine our democratic institutions and our faith in mamlachtiyut – respect for the state – than Benjamin Netanyahu.

Sooner or later the glory of this moment will fade. And then we will be left with the same Bibi, facing three criminal charges of corruption and subverting all his decisions to maneuvers aimed at averting a trial.

For all his remarkable achievements, the price to the fabric of Israeli society of keeping him in power is too high. The thousands of young people who gather every Saturday night to demonstrate against him aren’t going away. Despite the peace agreement, they were back again this week. As this handwritten sign put it: “My grandmother says, Thank you, Bibi. Now enough.”