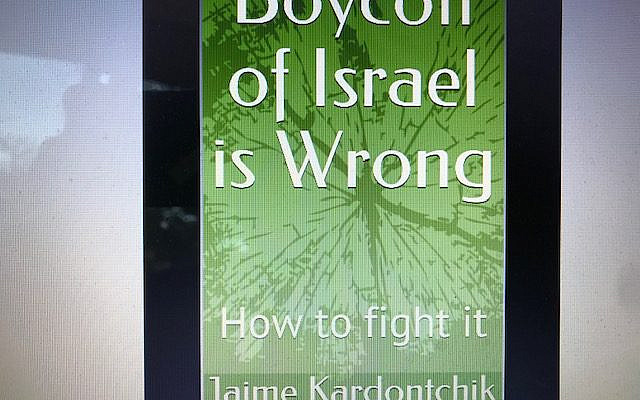 book cover of “Boycott of Israel is Wrong: How to fight it”

The new edition adds four new chapters. The first one is titled: “What is the Liberated Ethnic Studies Model Curriculum?”. It describes what makes the LESMC unique amongst the variety of “Ethnic Studies” curricula developed in California for K12 schools. The second chapter, titled “LESMC – Open anti-Semite indoctrination in K12 schools”, describes how LESMC is implemented in practice and how teaching in California K12 schools is being replaced by anti-Semitic indoctrination.

The third chapter is titled “The Jewish-Israeli perspective: Their voice must be heard”. Some school districts in California – either by misguided ideological reasons or just pure ignorance – decided to implement the LESMC at their schools. This chapter provides Jewish parents with some practical advice on how to counteract the unbalanced LESMC syllabus.

The fourth chapter is titled “A ray of hope: The Abraham Accords”. Some LESMC-based “Ethnic Studies” courses direct the students to CAIR’s website as the unique source for Islamic wisdom (CAIR stands for the “Council on American-Islamic Relations”). Some of CAIR’s top leadership have been associated in the past with Hamas, and over the years many of CAIR’s leadership have expressed, and in a number of cases continue to express, anti-Israel and plain anti-Semitic rhetoric. The latest example is Zahra Billoo’s speech in Chicago, last November 27, 2021, urging to fight the “polite Zionists represented by the Anti-Defamation League, the Jewish Federations, Hillel and the Zionist synagogues”. Zahra Billoo leads the San Francisco office of CAIR. CAIR should not be allowed to claim to uniquely represent the Islamic world: there are other voices in Islam that are for dialog, reconciliation and inclusiveness with the Jewish people and Israel: their voices should be heard too in K12 schools in California.

The new edition of the book can be downloaded for free at:

(It is also available at Amazon)

There is now an accompanying book by the author, titled “The Abraham Accords: Enabling Dialog and Inclusiveness”, published in December 2021. A Spanish edition is also available. It is titled: “Los Acuerdos de Abraham: Habilitando el Diálogo y la Inclusión”. This book presents the perspectives of young people from Morocco, the United Arab Emirates, Bahrein, Syria and Israel. They are all in favor of dialog, reconciliation and inclusiveness. Everything that is so opposite to boycotting and demonizing the “other”. This book will resonate with teachers who truly care about educating students, instead of indoctrinating them.