I have the pleasure of living in this holy land – with all of its conflicts and complications. I also am uber-aware that every step I take is on soil that is not only the stuff the Bible stories are made of – but also the place of history, my own and that of my people.

Once upon a time, between the 4th and 7th centuries CE, in a multicultural city called Menois, here in the western Negev desert, a Jewish community thrived. The community built a synagogue. It was plain and simple enough to suffice their religious ritualistic needs. Three hundred years later, when the community felt it was time to upgrade, they found a donor . The donor, named Yehuda, was happy to hire an artist who had been creating other beautiful mosaic floors for churches in the region, on the condition that he and his wife, Tamar, would receive credit for the funding. (No… schnor was NOT invented in the 20th century, says my ex-father-in-law, the source of all this information,)

To circles of colorful animals and beasts, the artist added Jewish motifs: grapevines and pomegranate flowers instead of the usual crucifixes prevalent in the Christian floors he had designed. He included birds – some wild, others in little cages. The wildlife of the Middle East was immortalized in colorful stone. He even decided to include an intriguing creature: an elephant, about which he had heard, but had never actually seen, not being indigenous to the Middle East. Of course the candelabra (menorah) and the lions of Judah took center-stage. As with other synagogues, it was built facing north-east (towards Jerusalem), contained an ark for the Torah, and a Bima (little stage) near which sat the most wealthy and honored congregants. 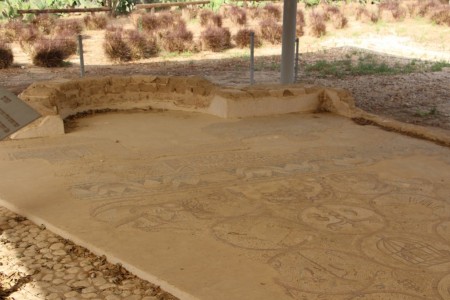 When the city was destroyed by insurgents in the 7th century, the synagogue, much of which was made of wood, was burnt down, and its columns dismantled and repurposed (one can even be seen in a mosque in Gaza to this day, I have been told). The magnificent mosaic floor was doomed to become buried in the sands of time.

Fast forward to 1956. The region was being developed with new infrastructure to accommodate the new pioneers in the kibbutzim near by. Nirim had been there since its relocation after the War of Independance, but Nir Oz, founded in 1955, needed a proper access road to the community. While bulldozing through the fields to build that road, the workers realized that their tractors were ploughing through something that was not the usual texture of the land. They called people from Nirim to come see, and came to the realization that they would have to reroute the planned road. They had discovered something exceptional. Aryeh and Avinoam, from Nirim, knew quite a bit about antiquities. They immediately informed the State Antiquities Department, but, meanwhile, while waiting for the officials to arrive, (which turned out to be three weeks later … you think government offices work slowly NOW?!) they managed to gently uncover most of what was left of the floor, miraculously undamaged by the tractors. 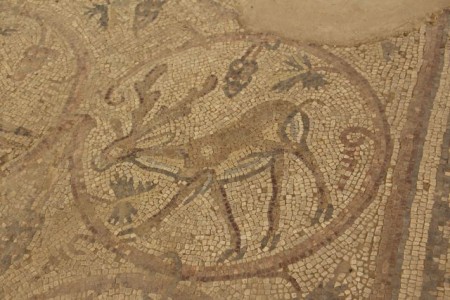 The floor was given VIP treatment, to try to preserve it. You can read more about that here.

As a part of our ongoing project of strengthening our community, socially and emotionally, and to celebrate the 70th anniversary of our founding, we, in Nirim, have referenced this wonderful site. One of the committees responsible for activities that will leave a lasting physical and aesthetic impression on our community, including Liraz, Galia, Mati and Zohar, decided to dream big: to link the past with the present and sprinkle those memories around the kibbutz. To resurrect the connections, and give them new life. They hired an artist, Noga Spector, to reproduce the pictures. With the help of Arnon our graphic artist and the son of Avinoam, one of those who helped work on the original floor when it was found , photos were taken, Google was scoured and replicates were made of all but the ones of the birds in cages, (objected to on principle by the artist and her aid, both vegans.)

During the last weekend in May 2016, Noga and her assistant Iris Chen, came down to Nirim to lead the project. Residents – members and children of all ages from 8 to 80 congregated in the old dining room (a large space due to be renovated for the first time since being built 40 years ago). Together they sat for hours on end, cutting, pasting, schmoozing, laughing, doing the tedious and love-laden labor of adapting and sticking little chips of color onto netting which sat on the replicated drawings from the ancient synagogue of our predecessors. 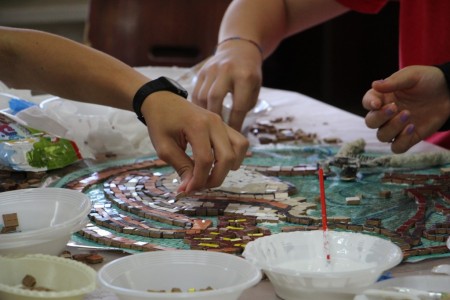 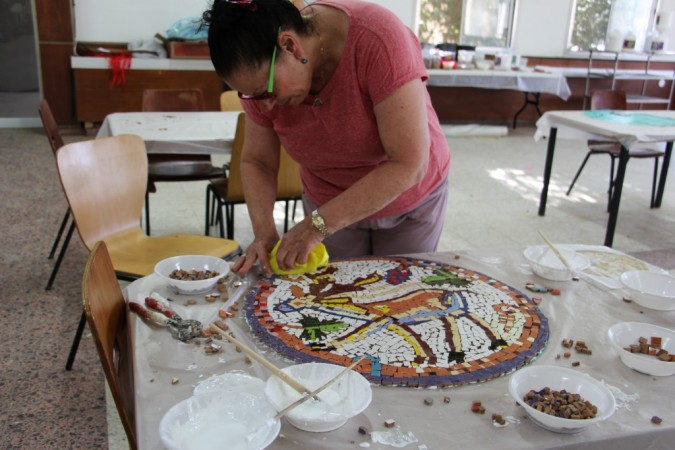 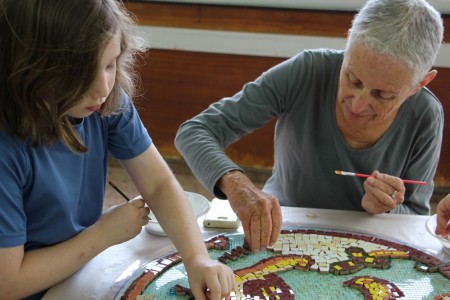 The project is a true collage, or mosaic, in many senses of the word. A collage of time, of people, of interactions with each other and our environment. I guess you could call it a collage of community. And that, in fact, is its Hebrew name: Collage Kehilati. Beauty marks that will remind us for years to come of our love for this place, and its people.

And maybe, in 1500 years’ time, archaeologists will discover our mosaics, and the original synagogue floor and be faced with a new conundrum. Especially the question about how a dragon got into the picture. How could they know that in the last weekend of May 2016, when a little boy and his mommy were working on one of the animals, he decided that it should be a dragon….. which may, in fact, cause a breakthrough in archeological beliefs and research in the future.

Unless they read my blog. 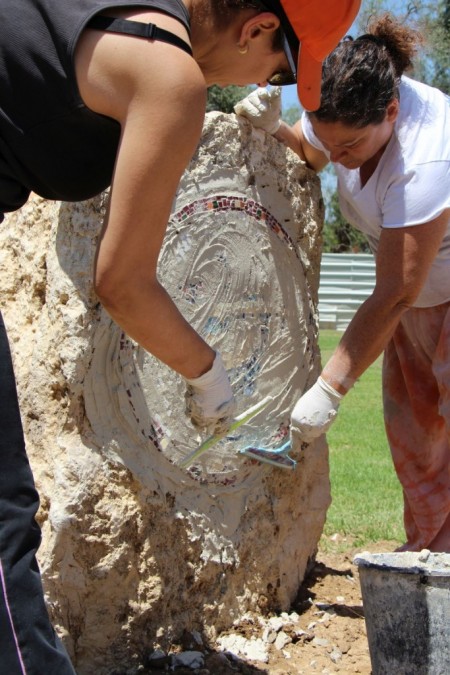 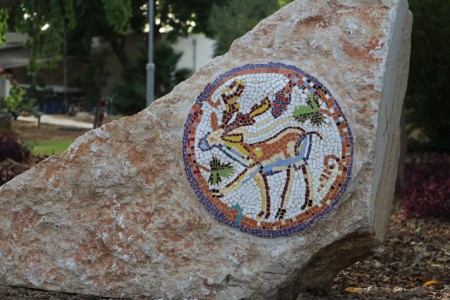 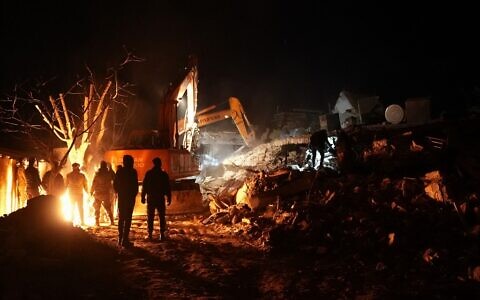 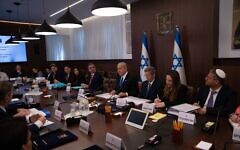