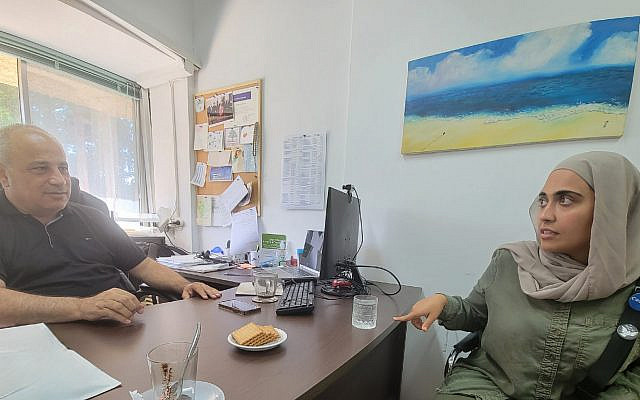 This past summer was my first trip to Israel since the signing of the historic Abraham Accords. I was curious to see the impact the accords have had over the past two years, but the insight I received may not be what one expected. I did not just learn how the Abraham Accords are improving relations between Israeli Jews and Arabs throughout the region. I learned what the Abraham Accords mean for Israel’s Palestinian Arab citizens as well.

I organized a meeting between myself, Mohammad Darawshe, and Sumaiiah Harib at the Givat Haviva Center where we discussed this very topic.

For some background, Mohammad is a Palestinian citizen of Israel who is most known for his work in promoting coexistence and equality between Israel’s Jewish and Arab citizens. He is currently the Director of Planning, Equality, and Shared Society at the Givat Haviva Center.

Sumaiiah is the first ever international student from the United Arab Emirates (UAE) to study abroad in Israel. She is currently studying nursing at the University of Haifa after previously working as an electrical engineer.

Mohammad shared with us the work they do at the Givat Haviva Center. He went over the history of the center and the different approaches they have conducted with their students to improve relations between Jews and Arabs in Israel and how they make substantial change to promote equality between them.

Mohammad also talked about the identity crisis – or identity “trauma” one might say – the Palestinian community within Israel-proper is experiencing. He referenced a recent public opinion poll for Israel’s Arab citizens where 72 percent of them reported that the term “Palestinian” plays an important role in their identity. Yet, they do not feel fully connected with Palestinian society because they are citizens of Israel rather than citizens of a Palestinian state. Conversely, it is hard for them to feel fully part of Israel’s society because they are not Jewish. Being caught in between these two communities has created an “identity trauma” for the nearly 2 million Palestinians within Israel-proper, as Mohammad described it.

When I asked Samaiiah why it is important for Emiratis like herself – and Arabs throughout the region in general – to learn more about Israel’s Arab citizens, she said that there needs to be a “changing of stereotypes.” She went on to say that,

“Emiratis do not understand the situation of Palestinians in Israel, they do not understand how they identify themselves. The identity crisis that Palestinians face on a daily basis are not known to the Arabs around the Middle East…It is something that must be explained…(The) people need to know what it means to be an Israeli Arab or a Palestinian with (an) Israeli nationality. This is not a given.”

At the same time, Sumaiiah emphasized that it also important for Arabs throughout the region like herself to learn more about Israel and the Jewish people. She said she started learning about the history of Jews in the UAE, but because they had limited resources on the history of Jews, she decided to embark on this study abroad experience in Israel to learn more.

Sumaiiah also talked about her home in the UAE. She shared what life is like in the Emirates today and the uniqueness of Emirati culture and history.

When I asked Mohammad why it is important for Arab citizens of Israel like himself to meet with people like Sumaiiah from the UAE, he responded by saying,

“It is important for (Israel’s) Arab citizens to reconnect with their brethren from the Arab world. This is possible only with people of countries that have diplomatic relations with Israel. This connection creates potential for (Israel’s) Arab citizens to act as a bridge of peace between their country Israel and the people in the Arab countries. Peace can really be between people, and not just regimes, so human contacts are the lasting formulas that formulate the people’s peace, not just the formal treaties.”

Mohammad talked about how Israel’s vibrant startup nation presents a golden opportunity to create strong bonds between the Jewish state and Arab world – and it is precisely the Arab community within Israel who can create these connections.

Israel’s Arab citizens have the linguistic and cultural skills to open Israeli firms in the Arab states and work with their Arab brethren throughout the region. However, as Mohammad pointed out, the Arab community within Israel-proper is significantly underrepresented in Israel’s high-tech industry. For example, even though they make up 21 percent of Israel’s citizen population, Arabs account for only 2 to 3 percent of the workforce in Israeli tech firms and only about 100 of the 10,000 startups in Israel were founded by Arabs. This is something that will need to change, not only for the sake of promoting further equality between Israel’s Jewish and Arab citizens, but also for the sake of creating more peaceful relations between Israel and the Arab world.

The Abraham Accords certainly present a unique opportunity to create a new regional dynamic, but it must go further than just treaties and relations between governments. It must also include more people-to-people contact and that means not only connecting Israel’s Jewish citizens with the people of the broader region, but its Arab citizens as well. Doing so may lead to a more prosperous and peaceful environment for Israelis, Palestinians, and everyone throughout the Middle East.

About the Author
Jonah Naghi is a Boston-based writer and the Chair of Israel Policy Forum's IPF Atid Steering Committee in the city of Boston. A frequent commentator on Israeli-Palestinian and US-Israel affairs, Jonah has spent extensive time in the region and received his Masters in Social Work at Boston College (2020) and LCSW (2021). All the views expressed are his own.
Related Topics
Related Posts
Jonah Naghi