In the quiet streets of Efrat, you can usually hear tractors, diggers and cement trucks working during the day. They are building new apartment buildings. I don’t know why they bother. Even if you listen carefully, you can’t hear the various big yellow vehicles just over the road as they line up and start to work on clearing a path so they can start the destruction of peoples’ homes. 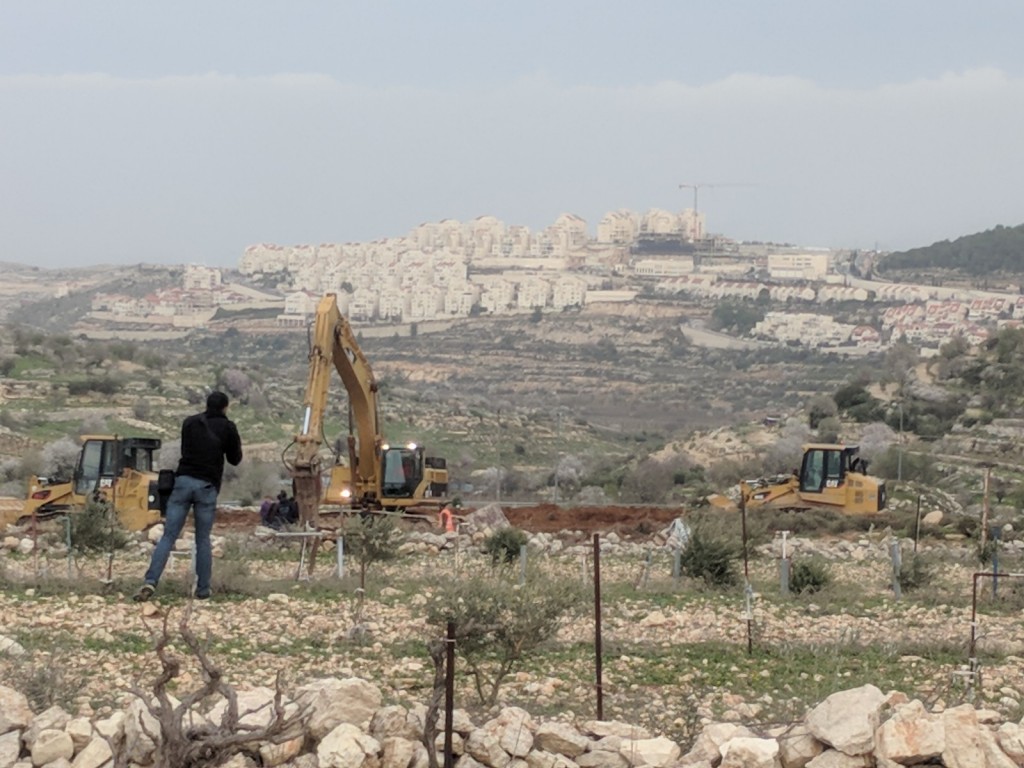 In the foreground, tractors paving a path so they can destroy Netiv Avot. In the background, the construction cranes of Efrat. Photo Credit: David Den Heijer February 12, 2018

If you pay attention, you might be able to hear the resounding silence of a whole lot of no one speaking up, or see the blank spaces where the signs in support of NOT destroying a neighborhood hung for a mere three days back in November. I know they were there; I hung them myself. I know they were legal; I personally got written permission. And yet they were taken down almost as soon as they went up, with everyone shrugging their ignorance of why that was done and where they went.

And if you listen closely, you might hear the broken promises of our leaders, those who just last week, met with and “listened to” the large delegation of youth who were yet hoping to prevent the destruction of their homes, leaders who listened and promised that something would be done to help them, so that at worst, they would not lose their homes and yet have no solution in place, and no place to go. Even as I write, many families who were forced to watch their whole community of Amona destroyed A YEAR AGO, who were also removed without being given an alternative place to live, are still living with their entire families in a room in a youth hostel/college dorm only a few meters in size. And just today, I am told, it was finally approved for the families of Netiv Avot to be allowed to move out to caravans on a small plot of land on the other side of the hill from where they are now.

So that’s good, right? The families will have somewhere to go when their houses are destroyed by the deadline of three weeks from now? Well, no. Because according to the information, it will take three MONTHS to prepare the area for them to move in. So will the Supreme Court, their highnesses, postpone the date of destruction to allow what they have given others before—to Bedouins and Arabs living on illegal land? Will they allow time for the families to at least resettle? No, of course not. Because they don’t want us here. That is the feeling I get, that is the reason I have not been writing about this much—on one hand, understanding that there were motions going through court, I held my breath and hope the decision to destroy would be overturned. On the other, part of me felt only hopeless and unheard. And I am left with both hands in the air, palms up, as I struggle to understand why things have to be done in the worst way possible here.

What chance is there, when it seems that the left would like nothing more or less than the removal of the so-called obstacle to peace—the West Bank? Even though there was no peace to be had years before there was a West Bank, even though the minute (and before) the Jews declared that we would have a state, we were set upon from all sides, hoping for nothing more (and not less) than our total destruction.

So now they are finding ways to accomplish it piece by piece. Why bother to build in Efrat? If we don’t stop this here, it will not stop. They will take Netiv Avot, then Elazar, then Alon Shvut then Efrat, as well as the Shomron…and yes, eventually Tel Aviv. To all those who think that once Gush Etzion, and all the communities over the ‘Green Line’ are gone, we will finally have peace, I ask you to think again. Remember Gaza–did leaving there bring us peace? No, it brought us rockets and mayhem. I remind you that if our fathers and grandfathers had not fought for our very existence 70 years ago, we would have as much place to be now as did all those who lived for years under pogroms and by the forbearance of all the nations we had to live in since we were originally expelled from our land.

Yes, our land. This is where we came from, and we maintained an existence here, even if minimal, throughout all the thousands of years we were forced to live in and then leave one country after another, and this is the land to which we finally returned. Through some quirk of the map, after originally being not just allowed but encouraged to live on Netiv Avot, suddenly the residents are told that this bit was okay but this wasn’t. The families (from a direct source) were told that this was government land, and they would get all the final approvals needed, and that they should just start building. And what do our leaders have to say about this current mess? It was an accident. An accident, that will leave families with infants and young children living nowhere, perhaps on the streets of Jerusalem, in protest outside the Prime Minister’s house—because that made so much difference for the families of Amona—not. Yes, I am using sarcasm and childish behavior, because this absolute travesty is bringing out thoughts like why did we move here? So we could have our son, who just went into the army, possibly be part of eventually having to force Jewish families out of their homes? So our government could throw their hands up and continue to treat us as second class citizens who deserve less than others who live here? 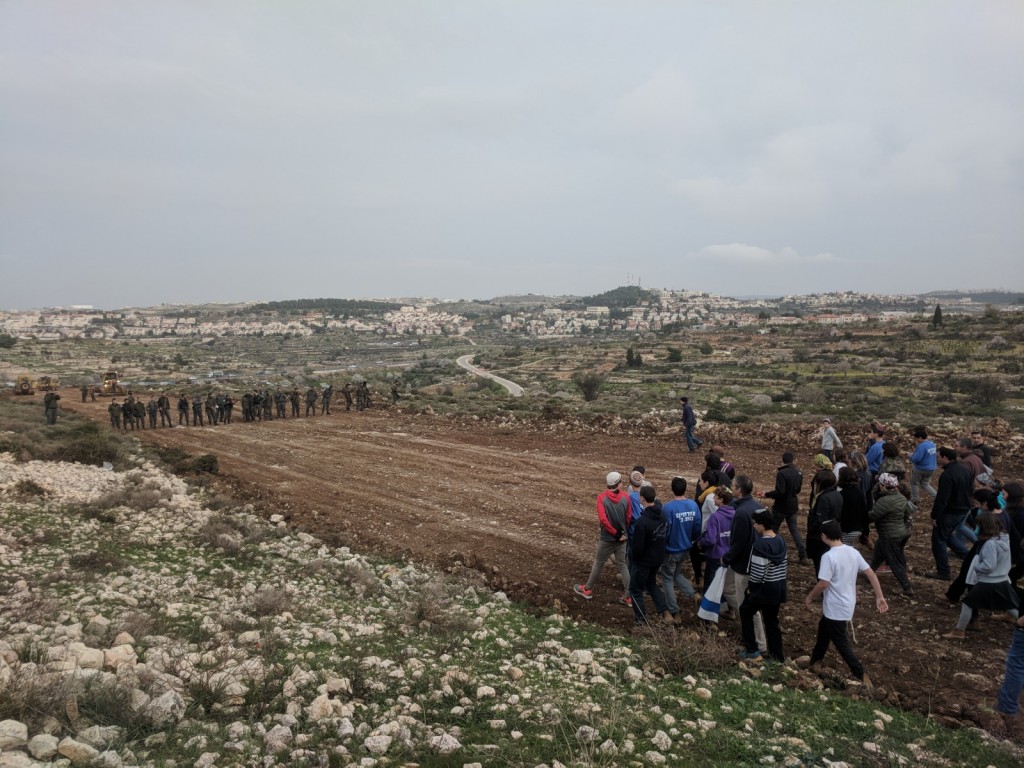 This situation truly belongs in this time period of Purim, where things are “nehefoch”—upside-down. Just last week, the day after his empty, meaningless promises to the youth, Bibi sent the construction vehicles to set up camp at the bottom of the hill. Far from preparing another place to live for the families, these “construction” vehicles were there to start paving a way through to the top of the hill, to make it easier to start the destruction once the order came through—even though the date was as yet a month away. And here it is again, the kicker: THEY PAVED OVER ARAB FARMLAND TO MAKE THE PATH. Yep, you heard that right. Not only were they circling like vultures way before the slated date, not only are they ready to hurt rather than help, they are—oh, the irony—doing this by ruining other land that unquestionably belongs to Arabs. Where were those “angels” of Peace Never to fight for these poor Arabs? According to the resident who was on the scene, they were nowhere to be seen. Meanwhile, one resident stood next to the Arab farmers, who stood there with their mouths open, trying to figure out how any of this was helping them, because as they could see with their own eyes, it was only hurting them. 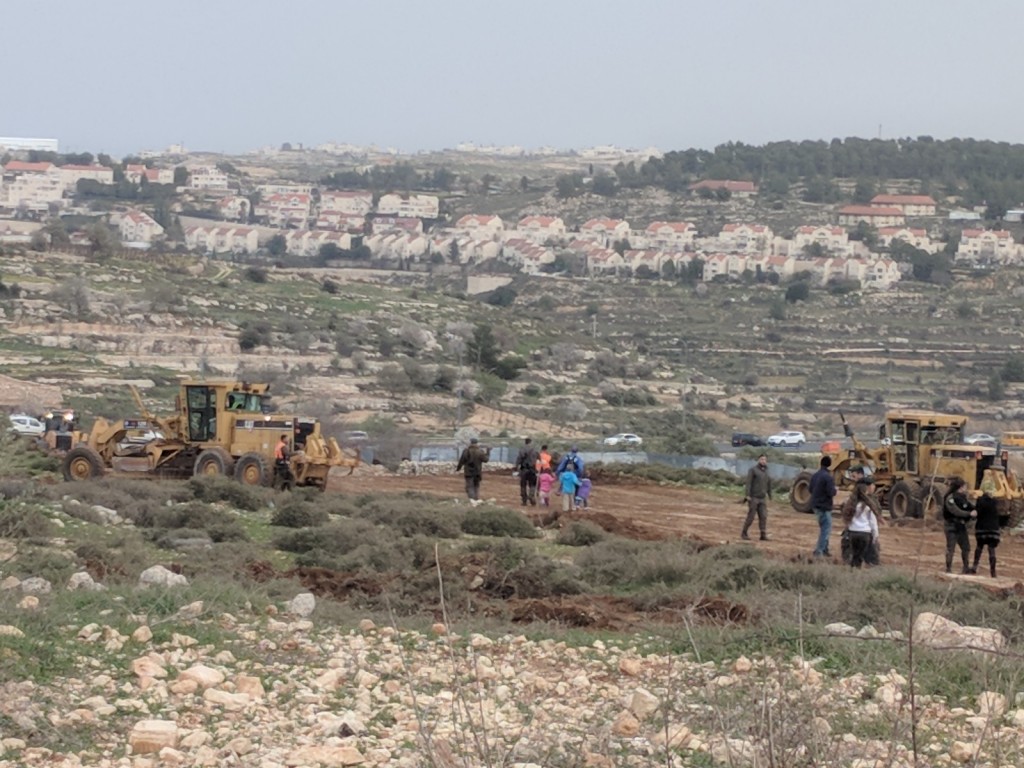 Finally, the families get to the tractors and get them to stop–for now. Photo credit David Den Heijer February 12, 2018

As far as my previous blog, It’s Not Over, I am sad to say that as of today, that area was still just a junkyard, with nothing new built on the spot of the destroyed workshop. This does not not bode well for the families who are lying awake, wondering when the tractors will start up again, and if anyone will be there to stop them then like the few who made it there this afternoon. 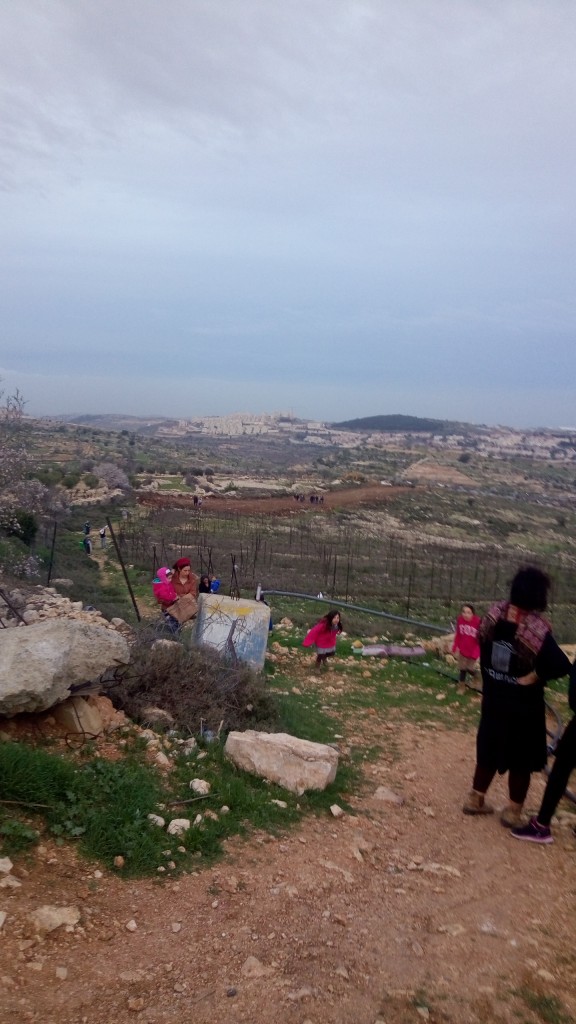 This is the path down the hill from Netiv Avot. You can see the families coming back from the protest, the Arab fields that are being destroyed, and the tractors lying in wait. Photo by Mori Sokal February 12, 2018

Does this make sense to you yet? No? Good. It doesn’t make sense to me either, or to the families who are holding their breath, waiting for the axe to fall, listening with all their strength for the tractors that have started, early, to pave the path of destruction.

About the Author
Mori Sokal is a FOURTEEN year veteran of Aliyah, mother of three wonderful children (with her wonderful husband) and is an English teacher in both elementary and high school in the Gush Etzion-Jerusalem area. She has a Masters’ degree in teaching, is a copyeditor, and has published articles in Building Blocks, the Jewish Press magazine.
Related Topics
Related Posts
Comments
Advertisement