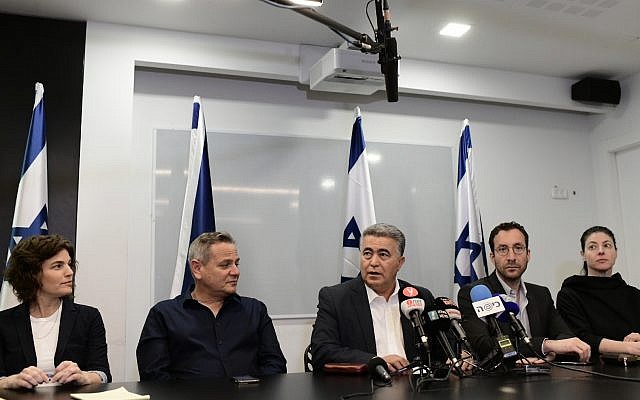 Although the election season has just begun, the stampede to bury Israel’s liberal democracy is already in full swing. Representatives from all parts of Israel’s diverse political spectrum seem to be in a head-on race to eulogize what remains of the country’s democratic left. Most opinion-shapers, fast on the heels of the pollsters, have already concluded that regardless of who wins the forthcoming elections, the right-wing will undoubtedly emerge enlarged and reinvigorated (see, for one example, David Horovitz in these pages). Journalists known for their leftist leanings are busy arguing whether it makes more sense to support Gideon Sa’ar’s New Hope alliance or to prefer Yair Lapid’s Yesh Atid. Some leading academics have actually gone so far as to suggest that Netanyahu’s democratic credentials outweigh those of his rivals on the right, who — alongside Gideon Sa’ar and his newfound partners Ze’ev Elkin and Yifat Shasha-Biton — also include Naftali Bennett and Avigdor Lieberman.

For anyone even loosely following Israeli politics, it may seem that Israel’s democrats have dissipated into thin air. They have not. But they are enveloped in a cocoon and appear to be in deep hiding. Unless they emerge from this stasis now, the March elections may succeed in what three rounds of elections have failed to do: to replace Netanyahu as prime minister and to kill Israeli democracy at the same time.

Adherence to basic notions of open democracies is not — however much one would like to assert — the natural bailiwick of any one segment of Israel’s society or polity. Non-democrats may be found amongst secular citizens as well as the ultra-Orthodox, in the center just as much as in the periphery, amid the rich and the poor, and, yes, on the left and not just on the right. What molds liberal democrats in Israel, as elsewhere, are binding concepts of what they think, the ways they organize and how they behave.

Liberal democracy is propelled by a value-based ideology which addresses the key issues on the national agenda. Its presentation serves as a counterfoil to the ideas promoted by many of Netanyahu’s opponents who assume that ridding the country of his leadership will automatically rectify all the country’s ills. As Gayil Talshir put it so succinctly in a recent op-ed in Haaretz, in Israel today the democratic agenda involves commitment to an equality-oriented social democracy and not to radical neo-liberalism; to working institutions based on checks and balances and not to executive domination; to a professional and not to a politicized civil service; to a state that serves all its citizens and not just its Jewish majority; and to a just two-state solution and not to an Israel that rules over another people against their will.

Only lists that articulate variants of these principles may be in a position to present a timely and meaningful alternative to what has become a narrow, ethnocentric-Jewish hegemony to which many of Netanyahu’s main opponents are inextricably wedded. Indeed, to suggest that Israel can be democratic while at the same time denying full political rights (individual and/or collective) to the Palestinian residents under its control is nothing short of disingenuous. The same holds true for decrying the corruption of Benjamin Netanyahu while at the same time supporting the politicization of judicial appointments and the adoption of an override clause that would emasculate High Court rulings (a cornerstone of the platform of the parties on the so-called center-right).

These questions will not fade away: they will be tackled by the incoming coalition. That is why what people think must be given organizational form on the party-political level to enhance the possibilities for a substantive, and not just a personal, shift in the aftermath of the elections. Polls and assessments are being based at this early stage on existing and potential — but yet to be consolidated — lists. They neglect the fact that by all accounts at least 20 mandates located somewhere between Yesh Atid and the Joint Arab list are in search of a home.

At this stage, a lot of juggling is going on in an attempt to form one left of center electoral alliance to fill this void. Ron Huldai, Tzipi Livni, Avi Nissenkorn, Ofer Shelah, Merav Michaeli (along with other remnants of the Labor party) and others are involved in these discussions, as is Meretz. The rationale is that too many parties in this space may not only confuse potential voters, but could also result in a loss of votes as new formations may not pass the 3.25 percent threshold — as happened on the far right in earlier rounds during the past two years.

These fears, however, miss the point. The essence of liberalism is pluralism — not only in thought, but also in structures and action. Two or three parties in the political area between the center-right and the Joint Arab List would offer Jewish and Arab voters of a similar democratic persuasion what they lack the most: viable choices which may allow them to support the party that best represents their views and values. If such options do not exist, they could stay away from the polling stations, further undermining liberal-democratic forces and weakening their bargaining power in the process of coalition formation. Thus, significantly, their influence on the direction of Israel’s future will be further curtailed.

In order to reinforce liberal-democratic alternatives, however, it is necessary to avert potential pitfalls that may divert voters committed to these ideas from voting their preferences. These include the tendency to personalize politics: to support an individual rather than and idea; to construct parties of professionals rather than to back what they stand for; and to pursue what is known as strategic voting: to prefer the party with the greatest chances of ousting the incumbents rather than that that which most closely reflects one’s beliefs. These maladies may not be easily remedied in such a brief period of time; they can, nevertheless, be addressed by a content-driven, programmatic campaign which permits people to vote for their convictions.

This dynamic can be further advanced if the liberal-democratic alliances that are established in the next few weeks also behave in an openly democratic manner. This means not jettisoning primaries or internal party elections where these exist (Meretz, Hadash, Balad); paying particular attention when lists are compiled to the need for gender equality and for the inclusion of representatives from as broad an array of social groups as possible; incorporating ideas developed in the protest movement and some of its leaders in the new lists, respecting other opinions, even of rival parties; and consciously avoiding inflammatory language as a means of challenging what has become an inciteful and divisive political discourse. A pact on these behavioral lines could go a long way towards magnifying the appeal of democratic alternatives — while, perhaps, also minimizing the in-fighting within the democratic camp.

Liberal democrats constitute a large portion of the Israeli electorate. They must be given a political form and a clear voice in the upcoming ballot. Too many confused and frustrated voters in search of a political voice may find themselves without a political voice. By default, they could then opt for a quick fix and find at the end of the day that they have ousted the old, without shaping what comes in its stead. Tikkun Olam, in its most profound sense, means taking every opportunity to tackle the maladies of the past and the present and offer a trajectory for a just tomorrow for all. It is not too late for Israel’s liberal democrats to wake up and rally around this fundamental and worthy cause.