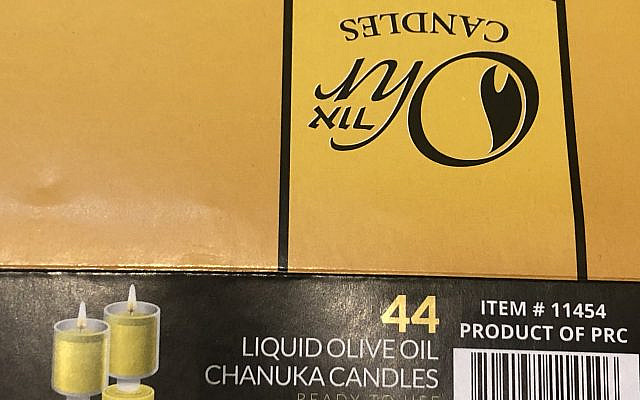 My wife started it!

“Do you know, all Chanukah candles come from China?”

“Really?” said the Chief Rabbi, a sharp tone in his voice, when I mentioned in Shul one morning that I was going to check this out. He immediately understood the implications. If the candles were made in the Uyghur region (which China renamed Xinjiang) there’s a high chance they were made by Uyghur Slave Labour. Especially if the cotton in the wicks comes from there.

He also understood the irony.

Chanukah celebrates our defeat of “the Genocide that nearly happened” when the Greeks tried wiping out our religion and identity and Uyghur Slave labour is an intrinsic part of the Chinese government’s Genocide erasing Uyghur Muslims’ religion and identity. Hellenisation then. Sinicisation now.

Nearly a million children are removed from their families to state boarding schools that forbid speaking Uyghur and practising Islam, on the cynical pre-text that they have one or both parents enslaved. Forcible transfer of 600,000 Uyghurs across China disrupts  weakens local ties and is intended to  “reduce  their population density.” This connection to Genocide is what differentiates Uyghur Slave Labour from other slavery.

I visited every shop in Golders Green and Hendon selling Chanukah candles.

The wife was right. As usual.

They all came from China, region unstated.

If you thought Chanukah merchandise just means candles, Menorot, and dreidels you’ve lived a sheltered life! There’s a world out there of Chanukah toys: pencils, rubbers, foam kits, light up decorations, stickers, dreidel funny faces, dreidel straws, chalk boards, pencil holders, light up balloons, and finally the piece de resistance, the Chanukah Wiggly Straw! Not to mention the Noah’s Ark Menorah with a different animal for each candle holder and or the Nail Varnish Menorah, with a different colour nail varnish bottle for each candle holder! Very jolly!

I emailed and phoned the three main companies involved, Ner Mitzvah, Cazenove and Global Kosher, asking in which city and region their products, including wicks, were manufactured. I made it clear all I wanted was reassurance that I could use and recommend their products and if not, I would ask them to change supplier if there were likely links to Uyghur Slave Labour.

They weren’t exactly pleased to hear from me! Or from the Jewish News who also contacted them.  However, the guy from Cazenove was lovely and clearly sympathetic. He told me where some products came from, but pointed out that if he was to be competitive, he had to source from China, and that a small business like his had insufficient manpower to audit supply chains fully. A reminder that what is at stake here is not only the Uyghurs but ordinary people’s livelihoods.

“Moshe” from Global Kosher was helpful. He told me Ohr E-Z menorah oil and wicks came from Mumbai. He said if I offered to sign an NDA, they might be prepared after the Chanukah rush to provide the detailed time-consuming information I wanted. He suggested I also ask this of Ner Mitzvah.

Ner Mitzvah however refused to let me speak to anyone, citing commercial sensitivity, saying their merchandise “comes from all over China.” When I followed Moshe’s advice and emailed them offering an NDA, I got a reply, which I don’t think I was meant to see. It said, “Ignore it”!

I asked colleagues in the coalition to EndUyghurForcedLabour. None were aware of any links between the candle industry and Uyghur Slave Labour, but  they agreed cotton wicks were an issue, as was anything classified as toys. Someone did a quick search for shipments from Chinese companies to Ner Mitzvah and Cazenove, finding nine cities known to be paired with the Uyghur region for the purpose of Slave Labour transfers and suggested how we could pursue this further.

However, as yet, there is no smoking gun, (or candle?), although the use of cotton wicks is still troubling.

In the Haphtarah chosen for Yom Kippur, Isaiah (58.6) says,

“This is the fast I choose: Loosen the bindings of evil and break the slavery chain…shatter every yoke of slavery (1).”

And if Rambam states that buying stolen goods is “a great transgression,” how much more so is buying goods made from stolen labour?

I didn’t feel comfortable using the cotton wicks knowing 80% of China’s cotton comes from the Uyghur region. Would I eat meat with an 80% chance it might be non-kosher?

So, I asked my Rav what to do. His perspective was interesting. He saw, correctly, how Uyghur Slave Labour infects the global supply chain, and suggested we target the businesses that contribute most to the Chinese economy. Although lighting candles, possibly made by Uyghur Slaves, is distasteful, what he sees in his daily life is the small people struggling to make a living. They too, he said, are victims of the People’s Republic of China as, in a small way, are we who are left with no other choice of Chanukah candles. He has a point!

He suggested we take this problem to the Chief Rabbi, with a view to tackling it at a high level.

Anyway, I found a solution, which was Shabbat candles, made in the EU by Ner Mitzvah that fit my Menorah (although I don’t yet know where the EU source the components from).

But, Oi Vey, whilst shopping around, I found most Shabbat candles were made in China!

Looks like I’ll have to add Shabbat candles to the list when I resume talking to the companies!