When Catalan president (or ex-president, depending whom you ask) Carles Puigdemont turned up unexpectedly in Brussels last week with a handful of his ministers, he caused quite a bit of confusion. Most assumed he was seeking asylum; the Spanish government had deposed him and summoned him to court on a charge of rebellion for declaring independence the previous week, and just a few days before, a Flemish minister had mentioned that perhaps he could seek asylum in Belgium. But at a press conference on Tuesday evening, Puigdemont was asked whether this was the case, and he said no. “This is not a Belgian question. I’m here in Brussels as a capital of Europe,” he replied.

Some have called him a coward, scuttling away with his tail between his legs to save his own skin while his vice president and 7 other ministers in his government were hauled off to jail near Madrid. A British journalist accused him of abandoning not only his government and his people but also his wife and two young daughters, still trying to maintain some semblance of normalcy while Puigdemont makes a mockery of his responsibilities.

I think these detractors completely misunderstand what he’s trying to do.

I’ve been following this story for a while, and I’ve taken particular interest in Carles Puigdemont. He just doesn’t seem like your average revolutionary. Not particularly fierce or confident in his speech or bearing, more cautious than charismatic, he seems more like the kind of guy you’d find advising high school students on their senior projects than the leader of a rogue government seceding from a major European country. He comes from a modest background, too: he’s the second of eight children born to a family of bakers in Amer (in the province of Girona), and he dropped out of college to pursue a career in journalism before getting involved in politics. He never even ran for president; he was appointed by other politicians after his predecessor was kicked out as part of the coalition negotiations in January of 2016. 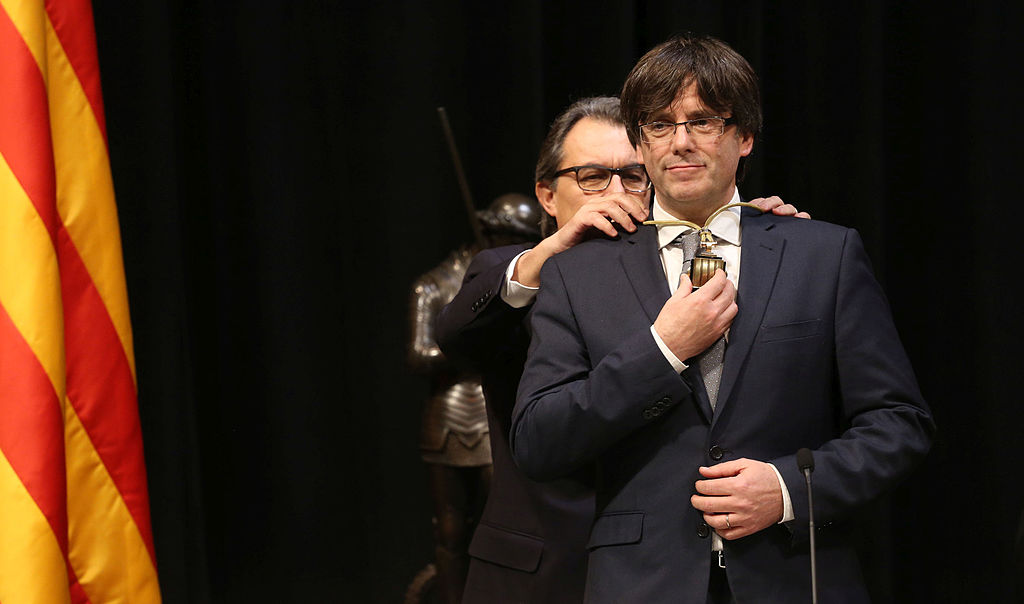 Nonetheless, I think he’s stood up to Spanish bullying, threats, and violence with incredible tenacity, grit, and courage.

I believe Puigdemont represents exactly what it is about Catalonia that, in his words, makes it a “different kind of country.” I like to say that the Catalans are sort of the Canadians of Spain; the more mild-mannered, polite, self-effacing northerners who seem to have more of a preference for respectful dialogue and peaceful measures than their, ah, somewhat coarser neighbors to the south. They even have an “eh?” (only in Catalonia it’s “oi?”)! They are masters of the nonviolent protest; they faced Spanish police batons, tear gas, and rubber bullets with quiet dignity, their hands in the air and their national anthem on their lips. There has been a truly remarkable lack of violence on their part in response to the political and physical attacks Spain has leveled against them. This is not coincidental at all; it’s who they are, their modus operandi, and their ultimate strategy.

Which brings us back to why Puigdemont is in Brussels. It seems pretty clear to me that he’s not there to run away or evade justice. For one thing, I think he planted himself there as a thorn in Europe’s side, making it impossible for them to ignore his cause or dismiss it, as many (including Israel) have as an “internal Spanish affair.” Furthermore, he can’t lead his campaign from a jail cell in Madrid, and as many Catalans still consider him their legitimate president, he has a duty to serve his people as long and as effectively as he is able.

Most importantly, however, he knew that his arrest would lead to civil unrest at a level that might spill over into violence, and he was very clear that he wanted to avoid that at all costs. In a press conference last Tuesday, he said: “My government could have chosen to send our loyal civil servants into a head-on battle for hegemony or used the elements of the Catalan police that are loyal to the Republic to defend our independence, but we chose to avert confrontation and violence. Spain will not drag us into a violent scenario.”

When I first read those words, I thought: Whoever heard of a pacifist war of independence?

How on earth does he expect to maintain sovereignty over a country without a military that is willing to physically defend its borders?

I grew up in two countries that fought bloody, bitter wars to win their independence, at a very high cost. As an Israeli, I am bitterly aware that sometimes there is no choice but to resort to violence. Using “pacifism as our only weapon” (as Puigdemont insists Catalans must do) in 1948 would have been an excellent way to let the Arab League finish off what Hitler started.

Of course, Catalonia is in a very different position than we were. Spain has acted with inexcusable aggression, but they are not about to send in the military and start shooting people with real bullets. And though the situation looks pretty bleak at the moment, perhaps time is on Catalonia’s side. Maybe Puigdemont’s “capital of Europe” strategy will work and Europe will find itself with no choice but to intervene. Maybe after several years of wasting time and resources on suppressing the Catalan uprising, Spaniards will grow tired of it and elect a new government into office that will respond more reasonably. After all, Rajoy already started out his latest term as prime minister in a precarious political position, and though his severe response to Catalonia’s efforts has gained him some support, it might be short-lived. In general, centralization is losing a lot of ground in the Western world, and nationalism is on the rise; the Catalonia crisis is a microcosm of that trend, and Rajoy’s stubbornness isn’t going to make it go away. Who knows what else the tide that brought us Brexit will bring.

Maybe the day and age has come when independence can be won through political means alone. I don’t know. But if anybody can do it, it’s the creative, strong, and doggedly hopeful people of Catalonia.

About the Author
Daniella Levy is the author of Disengagement, By Light of Hidden Candles, and Letters to Josep. Her prose and poetry — in 3 languages — have been widely published, and she was nominated for the Pushcart Prize for her short fiction. She is also a freelance copy and content writer. Born in the USA, she immigrated to Israel as a child, and currently lives at the edge of the Judean Desert with her husband and four kids. You can learn more about Daniella and her work at Daniella-Levy.com.
Related Topics
Related Posts
Comments
Advertisement