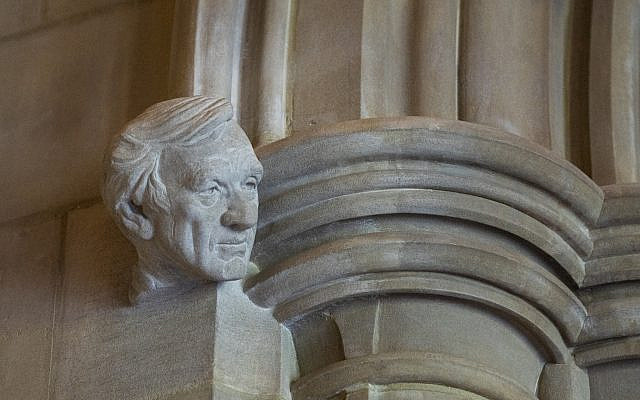 This past weekend, the Washington National Cathedral opened its doors to worshipers for the first time since the global pandemic.

For many, it was the first opportunity to see the cathedral’s newest addition to its iconography: a stone carving of revered Holocaust survivor Elie Wiesel.

Besides figures from the Hebrew Bible dead for thousands of years, Wiesel, who died in 2016, is the only Jew carved into the edifice of the Gothic cathedral. One other modern Jew, Rabbi Alexander Goode, who was one of the four World War II Army chaplains who went down with the SS Dorchester after giving their life jackets away to save others, is depicted in stained glass.

But some people found the decision to include Wiesel in a cathedral, a Christian house of worship, an anathema.

After The Washington Post covered the unveiling, one reader wrote: “The Nazis could never have done what they did without the help of many, many, many good Christians … he does not belong there.”

I asked the cathedral’s chief communications officer Kevin Eckstrom if the staff expected that kind of criticism. Yes and no, he said. Because Wiesel was Jewish, the cathedral staff knew the issue could be delicate. But he did not expect the volume of objections to Wiesel’s position on the Israeli-Palestinian conflict.

“That one came out a little louder than expected,” he said.

It was no surprise to me. In the months after Wiesel’s likeness was unveiled, Hamas fired rockets into Israel sparking retaliation and an 11-day conflict. Here in the US, the conflict ignited an unending wave of anti-Israel and antisemitic sentiment, oftentimes one and the same.

Wiesel’s position on the conflict was that Israel, the eternal homeland of the Jews, should be protected. When he visited in 1949, he saw the haven for Jews struggling to defend itself against attacks from its neighbors while simultaneously taking in Jews forced out of neighboring Arab lands or Europe. He had seen this before — Jews attacked by their neighbors — and it didn’t end well. Critics say that’s precisely the reason he should’ve displayed more empathy for the Palestinians. Others say it’s precisely why he didn’t. It’s almost as if he was a human who grappled with questions of right or wrong.

“You can’t escape the fact that Elie Wiesel was a deeply devout Jew. That’s exactly why he belongs in the Cathedral,” Eckstrom said. “His faith and his wrestling with God as a person of faith made him who he was and colored his story from start to finish.”

Nothing was carved without consulting Wiesel’s widow and the US Holocaust Memorial Museum. The church also consulted several rabbis, to make sure the carving did not violate the commandment prohibiting graven images. The answer? In a synagogue, such a carving would be verboten. In a church? Not a problem.

But commandments aside, back to the original question. Even if Wiesel’s likeness can appear in a cathedral, should it? If Christian teachings informed the hatred that led to the Holocaust, should a Christian house of worship honor someone who survived its atrocities?

Eckstrom emphasized that Wiesel’s message, shaped by his experience, is precisely the reminder that worshipers need before they converse with God. “Guarding against evil in the world, standing against genocide, keeping vigilant against indifference to the suffering of others — these are all universal themes that transcend any religious difference,” he said.

Though it’s under the auspices of the Episcopal Church USA, the Washington National Cathedral describes itself as a house of prayer for all people. Conceived by America’s founders as a national sacred space, the cathedral is where presidents have been memorialized, where the Rev. Martin Luther King Jr. delivered his last Sunday sermon, where Archbishop Desmond Tutu celebrated the birth of democracy in South Africa, where the Dalai Lama has spoken four times about the pursuit of peace and happiness.

Antisemitism in America has been on the rise ever since Wiesel died five years ago, Eckstrom pointed out, and it is incumbent on every one of us not to forget what happens when we look away. The carving compels worshipers to look up.

Wiesel’s visage is not just one of many carved into the cathedral’s walls and archways. His face is quite literally the first one you see when you enter the building via the Human Rights porch.

“He’s looking down at you and he’s looking into your eyes and you’re kind of looking up at him,” Eckstrom described. “There’s a moment where it almost feels as if he’s watching and that’s by design …. “It’s a little bit intentional to try to make sure nobody forgets how the church failed, how humanity failed and how we’ve got to do better and never forget what happened.”

This past weekend, I couldn’t help but imagine Wiesel gazing down upon visitors celebrating freedom in the nation’s capital and filing into the nation’s cathedral to worship.

“We’re hoping his likeness will serve as a reminder to everybody who comes into that space about everything that he endured and what our responsibility is now to carry on that legacy of preventing the kind of genocide that he survived,” Eckstrom said. “There is a lot of thinking that Christians should do when they see that carving.”

Carrying on legacies and living up to our responsibilities — we all should be putting our heads together and thinking about that.

An abbreviated version of this piece originally aired on People of the Pod, a podcast about global affairs through a Jewish lens by American Jewish Committee. In the same episode, the author interviewed Emi Palmor, former Director-General of Israel’s Ministry of Justice and a current member of The Oversight Board, which makes binding policy decisions on Facebook and Instagram. Listen here

About the Author
Manya Brachear Pashman is co-host of People of the Pod, an American Jewish Committee podcast about global affairs through a Jewish lens. She covered religion for the Chicago Tribune between 2003 and 2018.
Related Topics
Related Posts
Comments
Advertisement