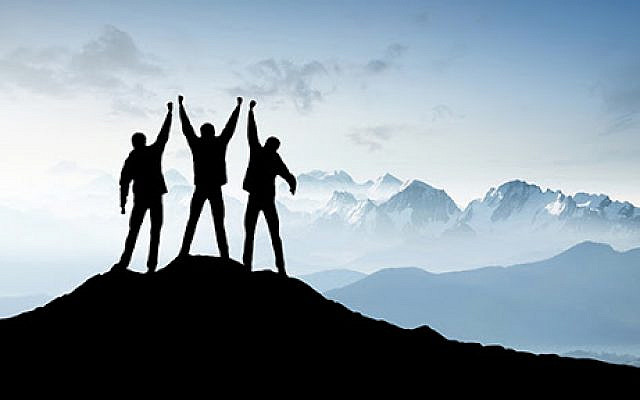 Silhouettes of a team on mountain peak. Sport and active life concept

If leaders are to bring out the best in those they lead, they must give them the chance to show they are capable of great things, and then they must celebrate their achievements. That is what happens at a key moment toward the end of our parsha, one that brings the book of Exodus to a sublime conclusion after all the strife that has gone before.

The Israelites have finally completed the work of building the Tabernacle. We then read:

So all the work on the Tabernacle, the Tent of Meeting, was completed. The Israelites did everything just as the Lord commanded Moses … Moses inspected the work and saw that they had done it just as the Lord had commanded. So Moses blessed them. (Ex. 39:32, 43)

The passage sounds simple enough, but to the practised ear it recalls another biblical text, from the end of the Creation narrative in Genesis:

Three key words appear in both passages: “work,” “completed” and “blessed.” These verbal echoes are not accidental. They are how the Torah signals intertextuality, hinting that one law or story is to be read in the context of another. In this case, the Torah is emphasising that Exodus ends as Genesis began, with a work of creation. Note the difference as well as the similarity. Genesis began with an act of Divine creation. Exodus ends with an act of human creation.

The closer we examine the two texts, the more we see how intricately the parallel has been constructed. The creation account in Genesis is tightly organised around a series of sevens. There are seven days of Creation. The word “good” appears seven times, the word “God” thirty-five times, and the word “earth” twenty-one times. The opening verse of Genesis contains seven words, the second fourteen, and the three concluding verses 35 words. All multiples of seven. The complete text is 469 (7×67) words.

A remarkable parallel is being drawn between God’s creation of the universe and the Israelites’ creation of the Sanctuary. We now understand what the Sanctuary represented. It was a micro-cosmos, a universe in miniature, constructed with the same precision and “wisdom” as the universe itself, a place of order against the formlessness of the wilderness and the ever-threatening chaos of the human heart. The Sanctuary was a visible reminder of God’s Presence within the camp, itself a metaphor for God’s Presence within the Universe as a whole.

A large and fateful idea is taking shape. The Israelites – who have been portrayed throughout much of Exodus as ungrateful and half-hearted – have now been given the opportunity, after the sin of the Golden Calf, to show that they are not irredeemable, and they have embraced that opportunity. They are proven capable of great things. They have shown they can be creative. They have used their generosity and skill to build a mini-universe. By this symbolic act they have shown they are capable of becoming, in the potent rabbinic phrase, “God’s partners in the work of creation.”

This was fundamental to their re-moralisation and to their self-image as the people of God’s covenant. Judaism does not take a low view of human possibility. We do not believe we are tainted by original sin. We are not incapable of moral grandeur. To the contrary, the very fact that we are in the image of the Creator means that we humans – uniquely among life forms – have the ability to be creative. As Israel’s first creative achievement reached its culmination Moses blessed them, saying, according to the Sages, “May it be God’s will that His Presence rests in the work of your hands.”[1] Our potential greatness is that we can create structures, relationships and lives that become homes for the Divine Presence.

Blessing them and celebrating their achievement, Moses showed them what they could be. That is potentially a life-changing experience. Here is a contemporary example:

In 2001, shortly after September 11th, I received a letter from a woman in London whose name I did not immediately recognise. She wrote that on the morning of the attack on the World Trade Centre, I had been giving a lecture on ways of raising the status of the teaching profession, and she had seen a report about it in the press. This prompted her to write and remind me of a meeting we had had eight years earlier.

She was then, in 1993, the Head Teacher of a school that was floundering. She had heard some of my broadcasts, felt a kinship with what I had to say, and thought that I might have a solution to her problem. I invited her, together with two of her deputies, to our house. The story she told me was this: morale within the school, among teachers, pupils and parents alike, was at an all-time low. Parents had been withdrawing their children. The student roll had fallen from 1000 children to 500. Examination results were bad: only 8 per cent of students achieved high grades. It was clear that unless something changed dramatically, the school would be forced to close.

We talked for an hour or so on general themes: the school as community, how to create an ethos, and so on. Suddenly, I realised that we were thinking along the wrong lines. The problem she faced was practical, not philosophical. I said: “I want you to live one word: celebrate.” She turned to me with a sigh: “You don’t understand – we have nothing to celebrate. Everything in the school is going wrong.” “In that case,” I replied, “find something to celebrate. If a single student has done better this week than last week, celebrate. If someone has a birthday, celebrate. If it’s Tuesday, celebrate.’ She seemed unconvinced, but promised to give the idea a try.

Now, eight years later, she was writing to tell me what had happened since then. Examination results at high grades had risen from 8 per cent to 65 per cent. The enrolment of pupils had risen from 500 to 1000. Saving the best news to last, she added that she had just been made a Dame of the British Empire – one of the highest honours the Queen can bestow – for her contribution to education. She ended by saying that she just wanted me to know how a single word had changed the school, and her life.

She was a wonderful teacher, and certainly did not need my advice. She would have discovered the answer on her own anyway. But I was never in any doubt that the strategy would succeed, for we all grow to fill other people’s expectations of us. If they are low, we remain small. If they are high, we walk tall.

The idea that each of us has a fixed quantum of intelligence, virtue, academic ability, motivation and drive is absurd. Not all of us can paint like Monet or compose like Mozart. But we each have gifts, capacities, that can lie dormant throughout life until someone awakes them. We can achieve heights of which we never thought ourselves capable. All it takes is for us to meet someone who believes in us, challenges us, and then, when we have responded to the challenge, blesses and celebrates our achievements. That is what Moses did for the Israelites after the sin of the Golden Calf. First he got them to create, and then he blessed them and their creation with one of the simplest and most moving of all blessings, that the Shechinah should dwell in the work of their hands.

Celebration is an essential part of motivating. It turned a school around. In an earlier age and in a more sacred context it turned the Israelites around. So celebrate.

When we celebrate the achievements of others, we change lives.

[4] On this rather difficult idea, see Philip Rieff, My Life Among the Deathworks (Charlottesville, Va.: University of Virginia Press, 2006). Rieff was an unusual and insightful critic of modernity. For an introduction to his work, see Antonius A.W. Zondervan, Sociology and the Sacred: An Introduction to Philip Rieff’s Theory of Culture (Toronto, Ontario: University of Toronto Press, 2005).