The Blogs
Karin Kloosterman
Sustainable news for Israel and the Middle east
Apply for a Blog
Advertisement
Please note that the posts on The Blogs are contributed by third parties. The opinions, facts and any media content in them are presented solely by the authors, and neither The Times of Israel nor its partners assume any responsibility for them. Please contact us in case of abuse. In case of abuse,
Report this post. 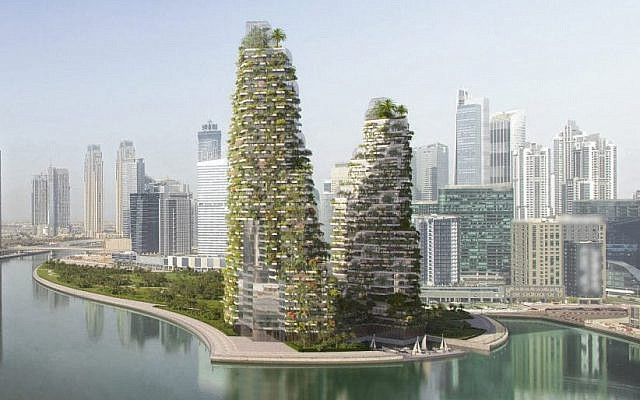 Sheikh Mohammed bin Rashid visited Bustanica, an urban hydroponics farm in Dubai. He plans that 80% of his city will be available to everyone within a 20-minute sustainable bus, train, walk, or bike journey.

Dubai was built in a New York minute, so fast that things like sewers couldn’t be dug to truck out human waste from the Burj. Dubai and the United Arab Emirates, in general, has a scale problem. But this Arab Gulf grouping of territories is open-minded and willing to change. Emiratis build fast, bold, beautiful and tall. They want everything that Europe has (like the Louvre) and they get it.

But unlike others in the Middle East (Saudi Arabia’s ruler has delusional ideas about a sustainable city looking like Neom or The Line built from oil money), Dubai’s petroleum and natural gas money is thinking a little more about our planet.

The UAE which built Masdar, a failed sustainable city where no one lives, has a new plan. And it’s practical. Sheikh Mohammed bin Rashid, Vice President and Ruler of Dubai has announced that Dubai will become a 20-minute city. It means he will build out bike lanes, walkways, and transportation so that 80% of what you will want or need from your city is a 20-minute something-sustainable away. Like Tel Aviv, or Jaffa will be with the new light rail train. In essence the idea is to re-plan Dubai so that it will be walkable and bike-able. That’s a healthy city. Like Rotterdam.

With celebrity chef Eyal Shani from Tel Aviv moving into Dubai, the city is getting more sustainable by the day. Eyal treats vegetables like minor gods, and insists on using only hyper-local, freshly grown food so Dubai will be stepping up to the plate. (Urban farming is part of the plan for Dubai.)

A peace agreement called the Abraham Accords between Israel and the UAE has turned into a love story. At least for the Israelis who have travelled to Dubai. There will be more cross-pollination in clean tech and startups, we expect. But, do consider: climate change mixed with July and August in Dubai sounds pretty hot for pedestrians or cyclists, so we hope for tree coverage and shade where pedestrians and people will roam. (Modern mashrabiya?)

Some estimates suggest that parts of the Middle East will be so hot, even the shade, that they will be inhabitable. A vertical forest concept for the future of Dubai sounds nice. Along with the 20-minute plan, Dubai’s advisers are leading Sheikh Mohammed him to the right direction.

About the Author
Karin Kloosterman is a long-time journalist, championing for the earth and people. She is a tech patent owner, brand designer, a published scientist, and an award-winning journalist. She's consulted governments, educational institutions and corporates such as Israel's Ministry of Foreign Affairs, TEVA, and Tel Aviv University. She founded the first international cannabis technology conference in Israel called Canna Tech to promote medical cannabis as medicine and science. And she developed a robot to grow cannabis on earth and on Mars. That part is still in development. Find her sustainability ideas at the world's first and leading eco news site for the Middle East, Green Prophet www.greenprophet.com Looking for eco advice on moving your company or idea forward? Contact her: karin@greenprophet.com
Related Topics
Related Posts
Karin Kloosterman