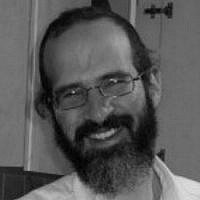 The Blogs
Shlomo Zalman Jessel
Apply for a Blog
Advertisement
Please note that the posts on The Blogs are contributed by third parties. The opinions, facts and any media content in them are presented solely by the authors, and neither The Times of Israel nor its partners assume any responsibility for them. Please contact us in case of abuse. In case of abuse,
Report this post.

This post was written by a friend, one of the men I described in my earlier post, Unsung Heroes: The Quiet Struggle of Those Who Resist Sexual Longings. The piece is especially timely, because in January 2015 Israel will be hosting Journey Into Manhood, an intense experiential workshop for people who are serious about understanding and dealing with their same-gender attractions.

I am writing this post to demonstrate that the option of diminishing same-sex attraction, as well developing opposite-sex attraction, is a valid and viable one for homosexually-oriented men who neither wish to be gay nor live a life of abstinence from the pursuit of their desires. I invite you to look closely at this topic in particular and about choice in general. If you value diversity, inclusion and tolerance, then you won’t dismiss the option of dealing with same-sex attraction the way I and many of my friends choose to deal with it.

You may have noticed that there is a supreme effort out there to delegitimize the efforts I’ve made and the way of life I describe. So much so that I think many readers might be taken aback, or even cringing, as they read what I’m advocating. You have probably heard that these change efforts are ineffective at best, dangerous at worst, and are at any rate a futile attempt at suppressing nature. I’d like to address each of these points, based on my personal experience.

It’s true that the vast majority of men who pursue this path don’t lose their homosexual desires completely, nor do they find themselves salivating at every fit-looking woman that walks by. But many, many of us have succeeded in reducing the power of our same-sex attractions enough that most of the time we’re not entertaining, let alone acting on the desire for a sexual or romantic relationship with another man. When we do, we know to check how our self concept is doing at the given moment and reconnect with our more authentic, healthier selves. Many of us develop heterosexual attractions strong enough to allow us to enjoy a marital or heterosexually-partnered life that is gratifying in every way a man (and his female partner) can hope for. So while most people don’t change in the sense of going from what society calls ‘gay’ to ‘straight’ (I personally reject these categories, since our identities are much more than whom we’re attracted to at any given time), many of us do change enough to live according to our values and aspirations.

You may also be under the impression that the process of modifying attractions is harmful. In addressing this concern, I’d like to reflect upon the opening scene in the movie The Sixth Sense, in which the former child client of a therapist played by Bruce Willis sneaks into the latter’s home bathroom, gives a chilling recount of the therapy that had gone awry in his childhood, and then commits suicide in front of the protagonist and his wife. Such dramatic outcomes for psychotherapy are certainly not the norm even for therapy gone wrong, but it touches on a crucial point: No therapist or therapy or client is perfect, and sometimes people suffer, in part due to complications in the process. Every therapy thus has the potential to be harmful, though the great majority of the time it is beneficial.

Sexual-orientation change (SOC) therapy is no different. While the vast majority of clients benefit, to varying degrees, from SOC therapy, some fall through the cracks. Is this process harmful? Not any more so than the process of dealing with chronic depression or addiction. And like therapy for depression and addiction, one of the focuses of SOC therapy is on affirming a person’s value and raising his self-esteem, so that the result is often increased self love and acceptance. So, while acknowledging the risk in any therapy, the question of whether to engage in SOC therapy is really more about one’s values, which leads me to address the third major concern people have with this work.

Activists have succeeded in persuading the general public that gay people are born gay and that this cannot be changed, so that any attempt to do so is misguided and futile. I don’t think I was born gay, but even if I was, the fact that I’ve been able to diminish my homosexuality to a great extent, and develop heterosexuality, renders the question irrelevant to me. The fact that I and others have changed is one that the gay lobby tends to rant against with vehement denial and vicious attack. In contrast, I myself and most of my friends on this journey have nothing against those who live as gay men. We know that our path is fraught with difficult challenges. It is very demanding mentally and emotionally, requiring intense introspection and ongoing examination of our perceptions of ourselves and other men. Those who don’t embark on this path, or who “drop out” along the way, have made a legitimate choice. The decision to pursue a gay life instead is therefore not to be derided. It is a choice to be respected, just as is ours.

So why would some of us embark on such a challenging and difficult journey, when we could be fulfilling the sexual and romantic desires that sometimes seem so natural? Speaking for myself, I could probably live a satisfactory life as a gay man. I could also choose celibacy, not an unadmirable goal. But I would not be living up to what I know deep down is my potential. And settling for something less than my potential would mean giving up on myself, to an extent. Since I refuse to give up on myself, I choose to face these challenges, as well as relish the many benefits: I am today happier than I have ever been. I feel free. I date women with gusto. I enjoy  the companionship, mutual affection and respect with other men which I had been craving all along. I am in line with the values of my religion and my gut. And I know I’m not alone – I know many other men who have experienced the same.

While my journey has been one of freeing myself from the compelling aspects of homosexuality, it’s much more than that. It’s a break away and out of the harmful messages I’d internalized since childhood that  there’s something wrong with me. It’s a break away from fear and shame, towards wholeness, joy and fellowship.

Activists accuse us of shaming ourselves and others, but the truth is that we’ve found that the first major step out of homosexuality is accepting ourselves fully, just as we are. The difference between gay-affirmative therapy and sexual-orientation change therapy is that the former stops at accepting oneself with one’s homosexual yearnings, while the latter goes  further by facilitating the acceptance of oneself with all of one’s desires. This includes the acceptance of the deep longing for integrity between one’s body and one’s desires, as well as the thirst to belong among those of one’s own gender.

I don’t blame the man who pursues a gay life. I can understand and respect such a decision. What I oppose is the denial, censorship of and attack against the fact that others can and do change, exemplified in the current legal assault against JONAH. Some people have been so desperate as to commit suicide because they didn’t know this option exists. I almost did myself. Withholding this option from those who might benefit from it is wrong. On the other hand, presenting the path of change as a valid option could save a life. It might also be the first step toward creating a beautiful marriage and family.

Don’t withhold this option from us. Don’t deny, dismiss or deride our experience. Rather, recognize the freedom of every human being to choose their destiny.

About the Author
A founding member of the Jerusalem Narrative Therapy Institute, Shlomo Zalman works with individuals and families in Israel and abroad, often conducting therapy and consultation sessions via telephone or Skype. He has published in medical and scientific journals on a wide array of subjects, and guest lectures for hospitals and academic settings several times per year. Shlomo Zalman’s current emphasis is on men and women dealing with pornography, homosexuality, sex-related addictions, and trauma, including group therapy for people dealing with same-gender attraction.
Related Topics
Related Posts
Comments