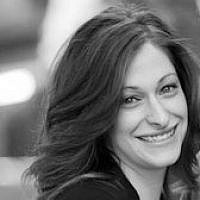 The Blogs
Cayla Solomon
Apply for a Blog
Advertisement
Please note that the posts on The Blogs are contributed by third parties. The opinions, facts and any media content in them are presented solely by the authors, and neither The Times of Israel nor its partners assume any responsibility for them. Please contact us in case of abuse. In case of abuse,
Report this post.

I feel like it was August, and then I blinked and it was December. I have spent the last few months loving every minute of my first maternity leave with my beautiful daughter, but fall has really flown by. Somehow, Chanukah is creeping up on us once again, which means that it’s time for some baking. Luckily, O is an amazing baby whose favourite room is the kitchen (thank G-d for vibrating chairs and exhaust fans!), which gives me a chance to spend a few hours working on my annual Chanukah sugar cookies.

Last year, I shared my lightened up latke recipe, and explained the reason Jews eat foods with oil during the eight days of Chanukah. Technically, these cookies aren’t really for Chanukah, but butter is sort of an oil, isn’t it?? Here’s a bit of a refresher if you’re rusty on the story of Chanukah:

About 2000 years ago, The Greek King Antiochus, who reigned over Jerusalem at the time, outlawed Jewish religious rites and traditions kept by observant Jews; he ordered the worship of Zeus as the supreme god. The Jews, for obvious reasons, were not willing to give up their religion, and when they refused, Antiochus sent an army to enforce his decree. A group of resisters, led by Judah and called the Maccabees, fought against the Greek army, and although the city was destroyed, and many were slaughtered, the smaller, Jewish army won. During the war, the Jewish temple in Jerusalem was destroyed (what is left of this temple is known as the Western Wall). When the Jews returned to piece the temple back together, they found a tiny jug of oil to light the temple’s candelabra, and instead of the oil lasting for 1 day, as expected, it lasted for 8 days. For a really adorable explanation of the story of Chanukah (and to see why a Jewish education is worth every penny!), check out this cute video from the students at Bialik Hebrew Day School.

To commemorate the miracle of the oil, Jews eat foods that are fried in oil, including latkes and suvganiot (jelly donuts).

Although the dough for this recipe is super easy, be sure to set a few hours aside for making these cookies, since chilling the dough, cutting the cookies out, re-rolling the dough, decorating etc. can take a bit of time. If you have young kids at home, this is a great recipe to get them involved in the kitchen!

Thanks to my mother’s very talented-in-the-kitchen friend, Debbie, for sharing her recipe with me! 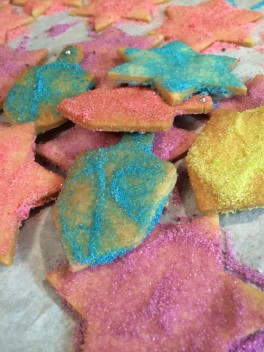 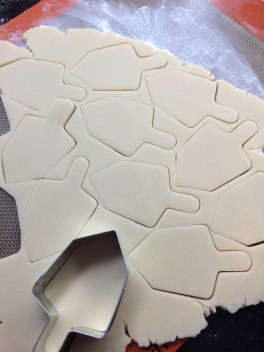 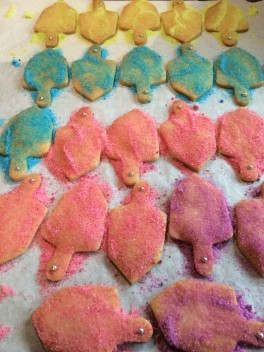 About the Author
A communications and branding professional, Cayla Solomon is also an amateur chef who shares her kitchen adventures on Chutzpah in the Kitchen.
Related Topics
Related Posts
Comments