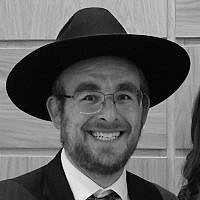 The Blogs
Yisroel Picker
Apply for a Blog
Advertisement
Please note that the posts on The Blogs are contributed by third parties. The opinions, facts and any media content in them are presented solely by the authors, and neither The Times of Israel nor its partners assume any responsibility for them. Please contact us in case of abuse. In case of abuse,
Report this post.

Image by rawpixel.com on Freepik

“Blaming is a dead-end street that doesn’t help anyone. But until we risk telling the truth to ourselves about how we really feel, nothing in our lives can change or improve.”

Adam was sitting in his car, stopped at a traffic light.

Unbeknownst to Adam, a drunk driver was approaching him from the rear at a high rate of speed.

The results were horrifying.

Both cars were destroyed.

The drunk driver only had a few scratches from the accident.

How are you feeling?

How can I be of assistance?

How can I help ensure that this driver cannot do this again?

Why were you at that intersection in the first place?

Why were you on the road at that hour?

Why were you in that model car?

Why was that non-family member in the car with you at the time of the crash?

Do you have a valid driver’s license?

How many moving violations have you received in the past 36 months?

Do you think that your driving behaviors or your own car might have caused this to happen to you?

The general theme of incorrect questions is that they all try to shift the blame onto the victim. A person sitting in a car at a red light isn’t responsible when another car hits them.

It doesn’t matter why they were at that location.

It doesn’t matter why they were out at the hour that they were.

It doesn’t matter whether their driver’s license was valid.

It doesn’t matter how many tickets he received previously.

And it certainly shouldn’t be theorized that Adam did something to cause this accident.

Could he have been in the right lane instead of the left lane? Certainly

Could he have chosen a different route to avoid the intersection of the crash? He could have

But that’s just hindsight. Adam had no prior knowledge that his choice would end up leading to an accident.

I bring this up because of the recent events regarding Adina Miles-Sash, aka Flatbushgirl.

For those who are unaware, here is a brief recap. Adina was doing a livestream when someone, misrepresenting themself as a known friend of Adina, asked to join on the video. Adina allowed the person to come onto the chat. This new person was a male who was naked and exposed himself to Adina, the other member of the livestream, and all the viewers.

Sadly, there are many who are using this to blame Adina for this. No, they aren’t blaming her for being tricked. They’re claiming that her behaviors attracted this flasher.

Sexual abuse victims don’t invite their abuse. They didn’t do anything to cause it.

We need to start viewing victims of sexual abuse as a driver sitting at a red light, who gets smacked by a drunk driver.

One should never say that the victim shouldn’t be out in that location/that hour or wearing those clothes. We shouldn’t put victims under the microscope to see what transgressions they’ve previously done, as these have zero relevance to the abuse.

If we actually care about abuse prevention, we need to practice it even when it is a victim whom we may not like. I get it, there are many people who do not like the content or the messages that Flatbushgirl puts online. That’s ok, one is allowed to disagree. But to use that disagreement as motivation to doubt her claims of abuse, blame her for the abuse or refuse to recognize that she is a victim, is just sinful.

One final note. Often people will say “I hate all abusers and there is no place for abuse, BUT/HOWEVER…”, beware of those buts and howevers. It means that they’re going to say something which negates their introductions.

And if you find yourself speaking like this, it means you’re not yet fully on the side of the victims.

To be on the sides of victims, means to be on the side of all victims. Not just the ones that share your religious, political and/or philosophical beliefs.

Only once we can get to that point, can we really start to make an impact.

Yisroel Picker is a Social Worker who lives in Jerusalem. He has a private practice which specializes in working with people of all ages helping them understand their own thought processes, enabling them to improve their level of functioning, awareness, social skills and more.

To speak with Yisroel about presenting at a child safety event or to discuss a personal case, email him at yisroel@ympicker.com

About the Author
Yisroel Picker is a Social Worker who lives in Jerusalem. He has a private practice which specializes in working with people of all ages helping them understand their own thought processes, enabling them to improve their level of functioning, awareness, social skills and more. To speak with Yisroel about presenting at a child safety event or to discuss a personal case, email him at yisroel@ympicker.com
Related Topics
Related Posts
Yisroel Picker