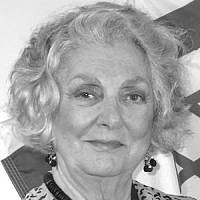 The Blogs
Susan Warner
Apply for a Blog
Advertisement
Please note that the posts on The Blogs are contributed by third parties. The opinions, facts and any media content in them are presented solely by the authors, and neither The Times of Israel nor its partners assume any responsibility for them. Please contact us in case of abuse. In case of abuse,
Report this post.

Most Christians who love Israel are those who read their bibles literally. We believe that one day God will fulfill every one of thousands of promises He made to Israel and recorded in the Bible.

So you might ask, “Why are the elections so important?” For Christians, the elections are a way for the people to express their sense of God’s desire for a righteous, just and strong nation. This is the critical time when Israel will elect a government that either follows God’s ways or does not.

Christians pray according to Proverbs 21(1-3) for your leaders’ hearts:

“The king’s heart in Adonai’s hand is like streams of water —
he directs it wherever he pleases.

2 All a person’s ways are right in his own view,
but Adonai weighs the heart.

3 To do what is right and just
is more pleasing to Adonai than sacrifice.”

“Righteousness makes a nation great, but sin degrades any people.

God gives some very strong commands for the land of Israel, its government, its security and its well-being. He tells Israel how to manage, preserve and nurture the land for the benefit of the people and for God’s pleasure. And so Christians pray that God will watch over Israel according to his word in Psalm 121:

“4 (3)  “For then, at that time, when I restore
the fortunes of Y’hudah and Yerushalayim,
2 I will gather all nations and bring them down
to the Valley of Y’hoshafat [Adonai judges].
I will enter into judgment there
for my people, my heritage Isra’el,
whom they scattered among the nations;
then they divided my land.
3 They drew lots for my people,
traded boys for whores,
sold girls for wine to drink.” Joel 4 (CJB)

Ha Shem wants rulers to rule in righteousness and not for self- interests. And so we pray for righteous leaders who will govern rightly:

1) “God, give the king your fairness in judgment,
endow this son of kings with your righteousness,
2 so that he can govern your people rightly
and your poor with justice.
3 May mountains and hills provide your people
with peace through righteousness.
4 May he defend the oppressed among the people,
save the needy and crush the oppressor.” Psalm 72 (1,2)

My bible gives me all of the details of God’s promises to Israel.

Like many Christians, my love for Israel is not because Israel is perfect. It is because God loves Israel. He said it, and so I believe it.   He has promised over and over again to restore His beloved people to the land and bring them back from every corner the world.

God wants the nation and its people protected and secure. And so Christians pray for the IDF and for its leaders who will effectively act against Israel’s enemies:

“ When that day comes,
I will make the leaders of Y’hudah
like a blazing fire pan in a pile of wood,
like a fiery torch among sheaves of grain;
they will devour all the surrounding peoples,
on the right and on the left. Yerushalayim will be inhabited
in her own place, Yerushalayim…..
….8 When that day comes, Adonai will defend
those living in Yerushalayim.
On that day, even someone who stumbles
will be like David;
and the house of David will be like God,
like the angel of Adonai before them.”

9 “When that day comes, I will seek to destroy
all nations attacking Yerushalayim;” Zechariah 12: (6,8-9)

God has promised to oversee Israel’s work as the people turn His land into a wonderful, fruitful and growing land as it was in ancient days. He says He will do it so that people will know He is God and not because the people have reached some state of perfection.

These are some of the promises that HaShem made to Israel what some Christians believe God will do. They are waiting for it —even longing for it.

Christians pray that the new government will treat the land  and the people with respect and honor.

In the corners and prayer rooms of pro-Israel Christian communities, you can hear fervent prayers against Israel’s enemies as in Psalm 83:

“2 (1) God, don’t remain silent!
Don’t stay quiet, God, or still;
3 (2) because here are your enemies, causing an uproar;
those who hate you are raising their heads,
4 (3) craftily conspiring against your people,
consulting together against those you treasure.

5 (4) They say, “Come, let’s wipe them out as a nation;
let the name of Isra’el be remembered no more!”
6 (5) With one mind they plot their schemes;
the covenant they have made is against you —
….14 (13) My God, make them like whirling dust,
like chaff driven by the wind.
15 (14) Like fire burning up the forest,
like a flame that sets the mountains ablaze,
16 (15) drive them away with your storm,
terrify them with your tempest.
17 (16) Fill their faces with shame,
so that they will seek your name, Adonai.
18 (17) Let them be ashamed and fearful forever;
yes, let them perish in disgrace.
19 (18) Let them know that you alone,
whose name is Adonai,
are the Most High over all the earth.”

You can hear Christian refrains for Israel’s strength to resist the pressures that come from every side, from every nation and from every enemy.

Today, I hope you will join all of the Christians who are praying for the peace of Jerusalem and Psalm 122.

“ (1) I was glad when they said to me,
“The house of Adonai! Let’s go!”
2 Our feet were already standing
at your gates, Yerushalayim.

3 Yerushalayim, built as a city
fostering friendship and unity.

4 The tribes have gone up there, the tribes of Adonai,
as a witness to Isra’el,
to give thanks to the name of Adonai.
5 For there the thrones of justice were set up,
the thrones of the house of David.

6 Pray for shalom in Yerushalayim;
may those who love you prosper.
7 May shalom be within your ramparts,
prosperity in your palaces.

About the Author
Susan Warner is co-founder of Olive Tree Ministries at Immanuel Church in Wilmington, Delaware USA. The Ministry specializes in teaching Christians about the Jewish roots of the Christian faith and other issues related to Israel and Jewish-Christian relationships. Together, she and her husband David have been teaching these topics for over 15 years. Recently Susan has been writing and teaching about Christian anti-Semitism and its role in current affairs. She is currently working on a book with the working title of "Yoke of Constantine-The Root of Christian Anti-Semitism.
Related Topics
Related Posts
Comments