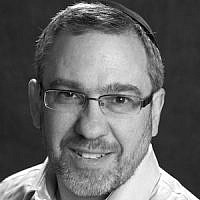 The Blogs
Raphael Shore
Apply for a Blog
Please note that the posts on The Blogs are contributed by third parties. The opinions, facts and any media content in them are presented solely by the authors, and neither The Times of Israel nor its partners assume any responsibility for them. Please contact us in case of abuse. In case of abuse,
Report this post.

The recently published survey from Trinity College and The Louis Brandeis center for Human Rights interviewed 1,157 self-identified Jewish students at 55 U.S. colleges, and found that a shocking 54% experienced or witnessed “anti-Semitism on campus during the first six months of the 2013-2014 academic year.”

I watched this trend develop over recent years, and felt compelled, as a Jewish educator and filmmaker as well as a parent, to produce “Crossing the Line 2: The New Face of Anti-Semitism on Campus” – a timely new documentary film from Jerusalem U, which premiered last week in front of over 800 people at the 92Y in New York. This film serves as both a warning and a call to action for the Jewish community. 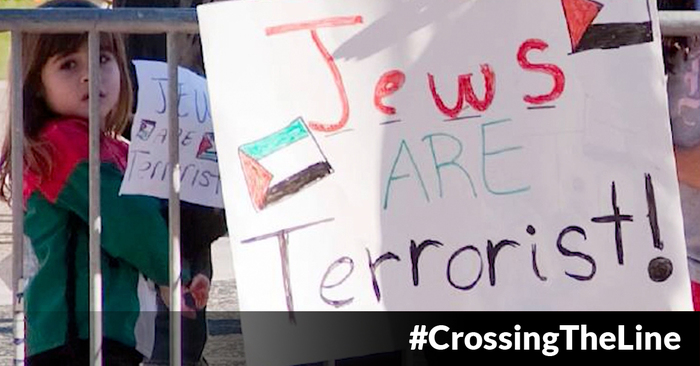 We cannot ignore the fact that young Jewish people on college campuses across North America are facing a well-organized and methodically prepared campaign of intimidation that shows an increasing tendency to cross the line into anti-Semitism. Over the fall semester alone there were more than 700 reports of anti-semitic incidents on campuses.

Just some of the hundreds of examples that we have seen in recent months include recent divestment votes where supporters of Israel have been shouted down, in some places with calls of “Dirty Jew”; campuses where Jewish students fear academic reprisals if they take a pro-Israel position; and the blatant public questioning of a young person’s eligibility to serve on a UCLA student body purely because of her Jewish faith. In some colleges Jewish students are targeted with distressing mock “eviction notices” and at UC Davis, George Washington U and several other colleges, swastikas have been daubed on Jewish student buildings. These type of incidents are causing young Jews to feel reluctant to express support for Israel or associate with those that do.

If we are going to succeed in preparing our young people for this pressure and the questions they will face about Israel and their relationship to it, then it is vital we take concrete steps: The first is we must understand the depth of the problem, and for that reason we want Crossing the Line 2 to be seen by everyone: students,  parents, and community leaders – to encourage that Jerusalem U has made  the film available online, in its entirety for FREE. This is in addition to numerous campus and community screenings that will be held across North America.

The next crucial step is to improve the quality of education for young Jews about Israel, both historical and geopolitical. To support this, Jerusalem U’s “Step Up for Israel” program offers a range of innovative and creative on-line videos and courses, but of course we need the community as a whole to develop sophisticated Israel curricula at every level.

A 2013 Pew Report made it clear that many young Jews, already struggling with their Jewish identity, are vulnerable to assimilation; this makes them especially susceptible to the tactics that we expose in Crossing the Line 2. We’re already seeing the impact of this, with increasing numbers of young Jews affiliating to so-called “pro-Israel” groups, whose views are worryingly close to the narrative of Israel’s enemies.

If we fail to provide the students with the right tools, it will lead directly to a decrease in Jewish pride and identity that we can ill afford. For the next generation of voters and leaders, the implications for America’s long-term support for Israel could be profound.

Working together as a community through effective education, we can begin to drive anti-Semitism from our colleges, protect our children from its effects, and strengthen their relationship with Israel and the Jewish community in the process.  Educating ourselves is the most powerful weapon Israel has. Let’s use it.

Learn more about the film-based educational opportunities offered by Jerusalem U through its Step Up For Israel program – high quality, dynamic and innovative Israel education, available on-line for young people, parents and community leaders.

Raphael Shore is the film’s producer and Jerusalem U’s CEO and founder. To watch the film online for free: http://ctl.stepupforisrael.com/watch/

About the Author
Raphael Shore is the founder and CEO of Jerusalem U. He has produced several award winning documentaries, including the the 2010 release "Crossing the Line: The Intifada Comes to Campus", and "Israel Inside: How a Small Nation Makes a Big Difference". His most recent release is the 2014 documentary "Beneath the Helmet: From High School to the Home Front", and in February 2015 updated version of "Crossing The Line", which exposes the growing threat of campus antisemitism, will premiere in New York.
Related Topics
Related Posts
Comments