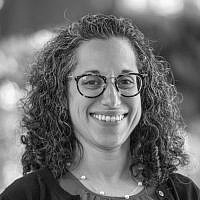 The Blogs
Maital Friedman
Apply for a Blog
Advertisement
Please note that the posts on The Blogs are contributed by third parties. The opinions, facts and any media content in them are presented solely by the authors, and neither The Times of Israel nor its partners assume any responsibility for them. Please contact us in case of abuse. In case of abuse,
Report this post.

When the Sabbath ended this week, I turned on my phone after a 25 hour pause in notifications and news updates. The first message that appeared was from Imam Abdullah Antepli to a WhatsApp group of colleagues in Texas saying that his heart is with them as he follows the unfolding story there. My heart sank. Not again. I didn’t know if there had been a natural disaster or a hate crime, but I knew it was bad news. And, as I learned that a rabbi and three congregants in a synagogue were being held hostage by a gunman, my fear grew. I am indeed grateful and relieved that the four hostages survived; I know that this incident could have ended differently, as it has in too many other circumstances.

As co-directors of the Muslim Leadership Initiative at the Shalom Hartman Institute, Imam Abdullah Antepli and I work together on strengthening Muslim-Jewish relations in North America. Sadly, over the last few years that has also meant reaching out to one another to offer words of comfort as synagogues and mosques have been attacked and as Muslims and Jews have been targeted, assaulted, and killed for their faith. Imam Antepli has also exemplified what it means to demand the highest moral character of our communities and to offer clear critique of our own communities when they fall short. He did this again on Sunday after this latest hostage crisis at Congregation Beth Israel in Colleyville with his tweets calling out antisemitism in the Muslim community. I hope that we can appreciate his moral clarity while also being inspired to ask difficult questions of our own communities.

Over the course of hours on Saturday evening, while I continuously refreshed every news site that I could for updates, I received messages from my Muslim friends, like this one: “What painful and horrible news to end your Shabbat with. Sending you heartfelt duas [prayers] my sister. I wish I could be with you and give you [a] long and tight hug.” And, “It’s terrible and [I’m] scared too. People can’t even be safe in houses of worship.” As these dear Muslim friends reached out, and as we cried together over what was unfolding in Colleyville, TX, I realized that they were scared too. They told me explicitly of their pain for the Jewish community after yet another attack on us in our sanctuaries. We also discussed their fear of being targeted because of the identity of the attacker. They know too well the repercussions for them and their communities when a violent crime is committed by a Muslim.

I appreciated the near immediate sentiments and statements by Muslim organizations condemning the violence and praying alongside Jews around the world for a peaceful resolution, like the ones from the  Council on American-Islamic Relations (CAIR) and Islamic society of North America (ISNA). And yet, I could not help but reflect on the irony that just a few weeks ago, Zahra Billoo, Executive Director of the Council on American-Islamic Relations in the San Francisco Bay Area, made the following remarks at the American Muslims for Palestine conference in November 2021. She said, “When we talk about Islamophobia, we think oftentimes about the vehement fascists. But I also want us to pay attention to the polite Zionists. The ones that say, ‘Let’s just break bread together.’ They are not your friends…Oppose the polite Zionists too…Know your enemies….” She went so far as to specify “we need to pay attention to the Zionist synagogues.” There was silence from many Muslim organizations and support from others.

Imam Antepli was among a few who spoke out about these statements. He discussed this speech and Muslim communities’ reactions to it with Yehuda Kurtzer, President of the Shalom Hartman Institute, on the Identity/Crisis podcast. On Sunday, in response to the hostage situation in Colleyville, TX, he tweeted, “Houston, we have a problem! Without ands and buts, without any further denial, dismissal and or trivializing of the issues… we need to honestly discuss the increasing anti-Semitism within various Muslim communities…” I appreciated the moral clarity with which he identified and called out antisemitism and his deep understanding of the complexity of this hatred which does not manifest only with guns in a synagogue but also appears in rhetoric, sometimes veiled as anti-Zionism. While not all anti-Zionism is antisemitism, indicating that Muslims should be wary of the vast majority of synagogues and the Jewish institutions with which Jews identify certainly qualifies.

I have seen many in the Jewish community appreciatively repost his tweets, and the broader media, including the Washington Post, UK Daily Mail, and the NY Post, enthusiastically report on his position. I worry that in our gratitude for his moral clarity, we might overlook his bigger message. Imam Abdullah Antepli is courageously critiquing his own community. We are connecting with what he said, which is vital and important, but let’s be sure that we are also noting what he is doing. Instead of simply lifting up a critique of another community that fits our own agenda, let’s challenge ourselves to follow his lead and ask moral questions of our own community. He is aiming to inspire an internal reckoning about an issue within the Muslim community. Even if we may agree with his assessment, this conversation is going to need to take place within the Muslim community and among Muslims.

I hope that we are inspired to ask of our communities the tough questions that he is asking of his. In addition to hearing what he is saying, can we also be inspired by his courage to push his community toward self-reflection, what we call in the Jewish tradition cheshbon hanefesh, literally, an accounting of the soul? Each of us can ask ourselves, what are the questions that our community needs to hear. What I have learned through Hartman’s Muslim Leadership Initiative is that  honesty about the struggles within our own community actually inspires honest reflection from our interlocutors. When we share with Muslim colleagues our disagreements about everything from interpretations of key religious texts, approaches to rabbinic authority, or positions on Zionism, we create space for an equally honest conversation about the struggles and challenges that their communities are facing.

To be sure, this moment of an attack on a synagogue requires us to focus on hatred towards Jews, which as we know too well threatens the lives of Jews. We’re grateful to Imam Abdullah for doing just that. He is asking his Muslim brothers and sisters to eradicate hate in their midst. And, he is challenging us to do the work of holding our communities accountable to being our best selves. Just as we celebrate and thank him for focusing on antisemitism, let us also heed this second call to ensure that we’re reflecting on our own communities. As we face real threats to Jewish lives in America, can we also ensure that our own fear and vulnerability does not turn into hate towards others? Can we be careful that the identity of the attacker is not used to blame Muslim Americans, or even Islam as a religion, for this individual’s hateful actions? We must not contribute to the Islamophobia that plagues this country and threatens our dear Muslim friends and neighbors.

On Monday evening, January 17th, as Martin Luther King Jr. Day came to an end, members of the Colleyville community gathered in person for a healing service with many others joining virtually. They came together to honor the freed hostages from Congregation Beth Israel and acknowledge their pain and suffering and that of their families, community, and society. Rabbi Charlie Cytron-Walker, one of the four hostages, spoke throughout the evening of pain and resilience, of fear and community. He quoted Reverend Martin Luther King Jr: “Love is the only force capable of transforming an enemy into a friend.” He said that if we lived our lives like this, we would have more friends who disagreed with us. Rabbi Cytron-Walker encouraged us to get to know our neighbors, even those with whom we disagree, to build a more compassionate and empathic society. He is working towards ensuring that this instance of hate does not breed more hate for Jews, or anyone one else in our society. He is a model of this type of leadership as are the pastors and imams who came out to help save the lives of their fellow Americans.

Like Abdullah, I pray that Muslim communities, and Americans more generally, grapple with the antisemitism in their midst. And, I hope that Jews do the same about the Islamophobia within ours. Together, we can build an America that honors each of our traditions and faiths and lives up to the promise of freedom of religion for all.