While Mission, Texas is the town where I grew up, then Gonzales, Texas is the font of tribal memories. Just as some of you treasure family tales of Anatevka, Brooklyn, Budapest, Vilna, Alexandria, Thessaloniki or Odessa, my inherited memories hover over the little town with the big Jewish history on the road between San Antonio and Houston. Members of my family lived there for at least 80 years, and I view myself as an honorary son. I even think of it as Mayn shtetele Gonzales, in a homage to the Yiddish song, “Mayn Shtetele Belz.”

Mayn shtetele Gonzales is in the news, indirectly, these days. How so? It popularized the pugnacious phrase “Come and Take It” in 1835 at the start of the Texas Revolution and it’s still associated with the place.

The phrase dates back to the Greek term “molon labe” or ΜΟΛΩΝ ΛΑΒΕ. Spartan king Leonidas hurled that taunt at the Persian king Xerxes before the Battle of Thermopylae in 480 BCE.

Fast forward 2,300 years from the Battle of Thermopylae to the Battle of Gonzales. In October 1835, Mexican troops tried to seize a bronze cannon held by Texas forces in Gonzales. The local militia refused and wrote “Come and Take It” on a flag with a drawing of the cannon. That’s been part of the civic identity ever since. Far beyond Gonzales, the phrase and the cannon grew into a political signal of defiance.

But in 2020 and beyond it turns out that Come and Take It connotes in some circles the wrong kind of defiance. In August, Project Veritas publicized the leak of an FBI list of symbols and images used by “militant violent extremists.” High on the list was the phrase “Come and Take It,” illustrated with that flag and the brave little cannon that could.

The issue also surfaced in 2021; the president of the University of Texas at San Antonio, Taylor Eighmy, sent a letter to the UTSA community about the flag and motto, which had been used by the university’s athletic department. He wrote with exquisite vagueness:

The history of Texas is steeped in the tradition of the “Come and Take It” image. However, the image can have sharply different meanings for different people. Recently, this imagery has been associated with some political movements and causes. It has even made its way into political protests on the grounds of the Texas State Capitol.

For these and other reasons, there are concerns that this tradition may no longer reflect its originally intended purpose of rallying football fans and is not reflective of our university, our founding mission and our collective values.

If Eighby doesn’t like Come and Take It, I bet he’s really irked by the name of the high school sports teams—the Apaches—and the Confederate statue in the town’s Confederate Square. I leave those matters for the town citizens to address. 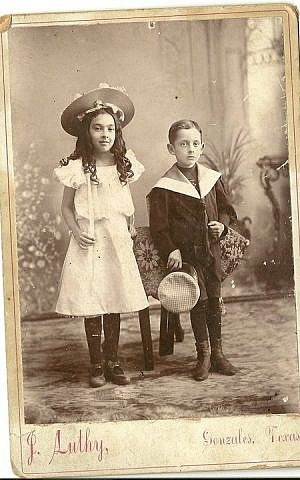 Grandmother Eva and her brother around 1898.

Switching from the political to the personal, I embrace Gonzales as the site for photos that depict a big happy Jewish family in Gonzales. One from the late 1890s shows my grandmother Eva Michelson posing with her younger brother for a formal photo at a Gonzales photo studio. Another shows her in a white dress, dark-haired with her head slightly tilted, in the six-member 1909 graduating class of Gonzales High School. 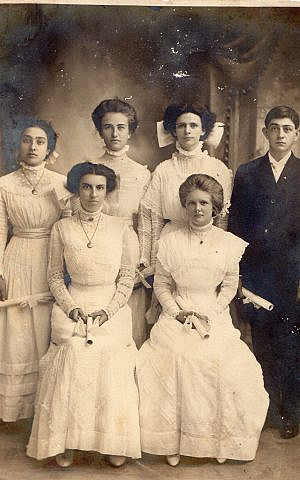 Others show my great-grandparents, the German-born Lehman and Esther Michelson, outside their stately brick house with Eva and her husband Jared Lissner and their young daughters, my mother Shirley and her older sister Charlotte.

Other photos show Esther’s grandkids sitting with her on the house’s steps in the 1920s, and other groupings of Esther with her seven children as adults—eldest Eva, sisters Ruth, Sue and Adrienne, and sons Jacob, Harold and Lawrence.

I’ve visited the Jewish cemetery on Water Street, where Lehman, Esther, Jared, Eva and my mother Shirley are all buried, along with other relatives. I say kaddish for them and place a rock on my mother’s gravestone.

I treasure images and stories of the extended family that gathered from around Texas in the home of the entrepreneurial German-born Michelson patriarch and matriarch. I like thinking of my mother and her aunts, uncles and cousins mingling in Gonzales. Fifty years later, many of them were still getting together in San Antonio, where my mother’s aunts Ruth, Sue and Adrienne lived. What started in mayn shtetele Gonzales moved west to the golden land of San Antonio. 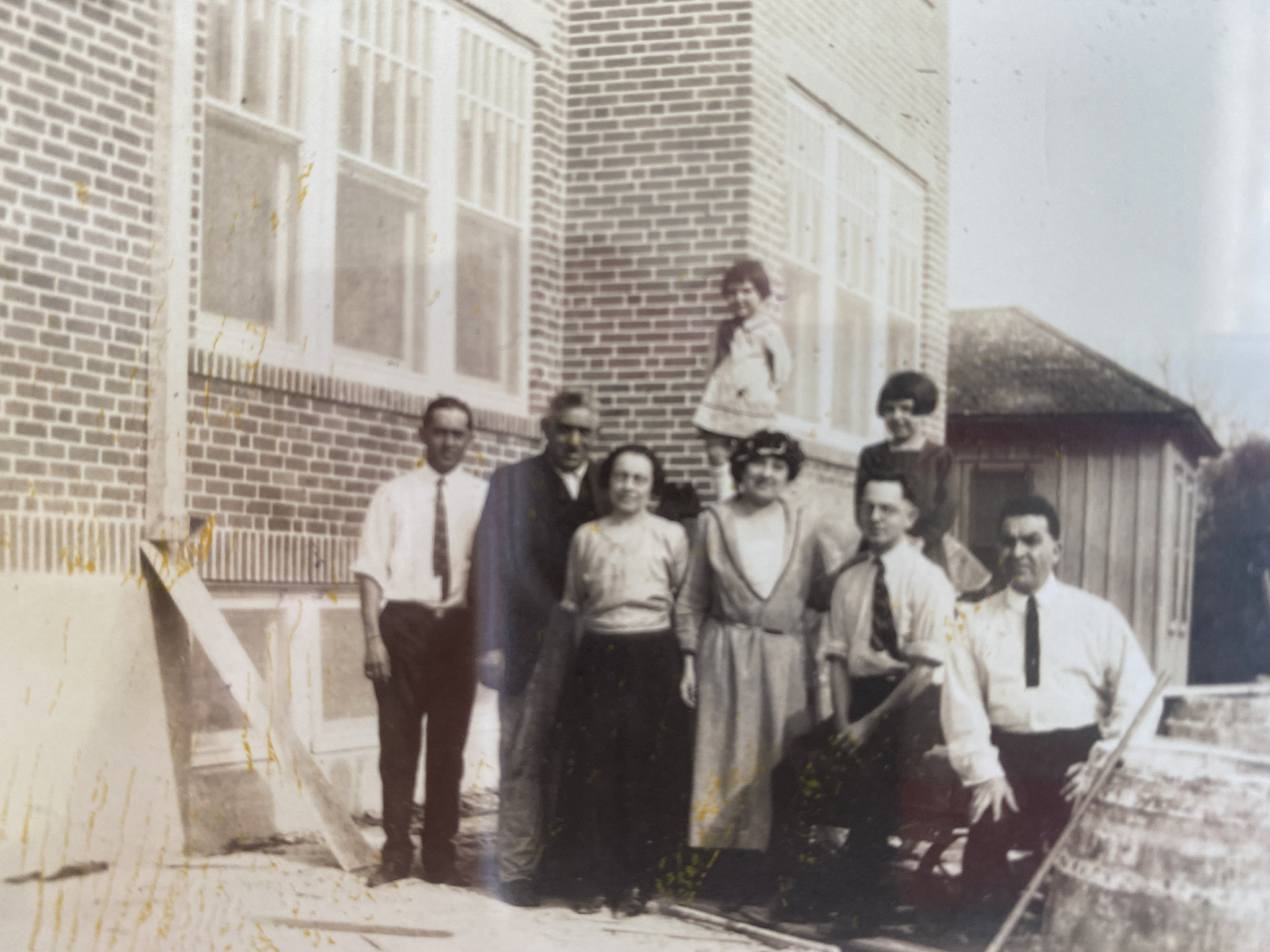 Lehman and Esther Michelson, second and third from left, Eva Michelson Lissner in robe, her husband Jared Lissner to the right, their daughters Shirley at top and Charlotte, with two of Eva’s brothers.

Over the decades, visits back to Gonzales gave me a sense of the place. In the 1960s my mother took my younger brother and me to visit the graves of her parents. In 1989, I took my fiancé there to pay our respects to my mother, who died in 1984. I even looked into buying a burial plot in that cemetery, a notion that proved wildly impractical given I live in suburban New York. In 2008, during a solo vacation in Central Texas, Abbi Glosserman Michelson, the irrepressible widow of my mother’s first cousin David “Buddy” Michelson, drove me to Gonzales to the cemetery and the county courthouse, where officials still remembered the Michelson family.

While Buddy and Abbi relocated to nearby Lockhart in 1978, memories of the Michelsons and other Jewish families are surprisingly well documented in histories of Jewish Gonzales.

For example, the Encyclopedia of Southern Jewish Communities has a Gonzales page. It states,

The Jewish community of Gonzales began to grow substantially in the 1870s, with the arrival of Jewish merchants and peddlers. Over the next 40 years or so, families such as the Stahls, Michelsons, Forgotsons, Ephrons, Orinovskys, Gurinskys, Friedmans, Tudzins, and others arrived to take their place in this small town of approximately 4,000 people. Even at the height of its Jewish presence, it appears that no more than 40 to 60 Jews lived in the city. However, their existence was very much part of the commercial activity of Gonzales. . . . Gonzales Jews were involved in a wide array of businesses. The Michelsons had a candy shop and café, which also served as the Greyhound bus station, as well as the local Coca-Cola franchise. 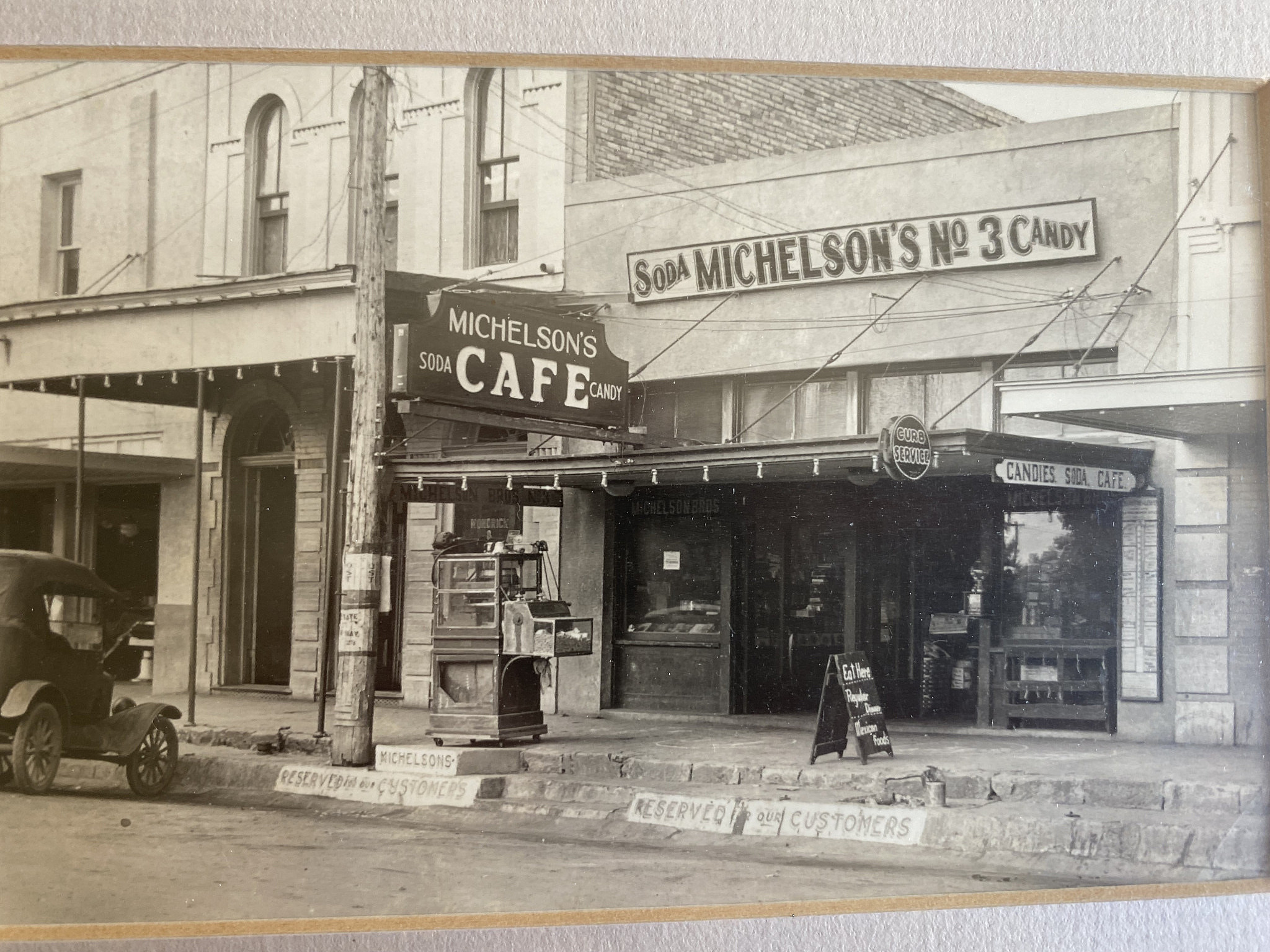 A family of small-town Jewish entrepreneurs.

One exceptionally useful document is From Ghetto to Gonzales, From Oppression to Opportunity: The Study of Jewish Businesses Along the Victoria Road. Kay C. Goldman wrote this in 1995 for her master’s degree at Southwest Texas State University (now Texas State University at San Marcos. Its longest chapter is about Gonzales, and its first direct connection to my family says, “Prior to the turn of the century, Lehman Michelson moved to Gonzales and opened the Barrel House Saloon in the Reese building.”

In 1912, Harold and Jake Michelson bought the Candy Kitchen and later expanded it to include an ice cream parlor and foodservice operation. Around 1914 the family bought a bottling plant. It handled Coca-Cola and stayed with the Michelsons for the next 50 years. The Michelsons also held religious services on the third floor of the family home.

Goldman wrote, “As in other Texas towns, the Jewish families of Gonzales intermarried. Three Bath sisters married into the Stahl, Michelson, and Forgotston families.” The Bath (spelled Badt in Germany) daughters were Sara, Selma and Esther; Esther married Lehman and had seven children, including my grandmother Eva. Esther’s the stern matriarch in many of the family photos of which I’m now the conservator.

I have even learned that Eva, daughter of thriving entrepreneurs, was something of what would now be called a “boldface name” in the social column of the Gonzales Inquirer. One notice said: “Miss Eva Michelson of Gonzales, Miss Rosa Blumenthal and Mr. Lewis Reiman composed a merry autoing party who went to Taylor Thursday night to see the circus.” Beneath the notice she wrote in a scrapbook, “October 26, 1911, Miss Rosa was an AI (?) chaperon.” Another note from her daily journal said, “Friday at Goldsteins for the evening. Saturday left for Gonzales via San Antonio at 4.45 pm.” While I don’t remember my grandmother, who died before I was two, I clearly inherited her zest for obsessive photo tagging and precise self-documentation. She would have loved posting on Instagram and TikTok. 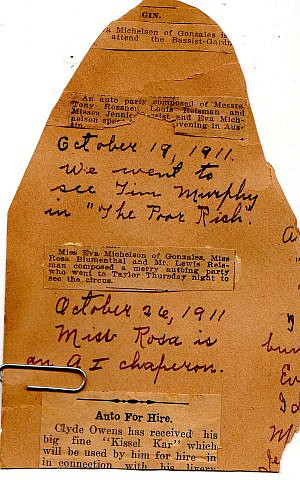 “He stood there on the sidewalk outside Michelson’s Café in Gonzales. The letter from the Army Draft Board said the bus would pick him up at 10 o’clock this morning. He glanced at the courthouse clock across the street—9:15 a.m. He had been standing here almost an hour. It was better to wait here though than at the house. His mother was very upset. She had been crying off and on for several days. So, he had said goodbye, and came on to the bus stop at Michelson’s.”

I’m happy to see Gonzales remembers its history and is carrying on. Local businesses include Come and Style It & Company, along with the Come and Take It Bar and Grill. Like the Michelsons of 100 years ago, they knew the value of a catchy name. I’m doing part here to honor and expand the knowledge of the Jewish families in the town; most of my maternal relatives still live in Texas. I don’t live there but I do like writing about the place.

And to top off the vibe, the Gonzales Chamber of Commerce & Agriculture will hold its “Come and Take It Celebration” October 1-3. The chamber’s online store sells hats, coffee mugs, flags and t-shirts with that ornery motto and artwork. I like to think Lehman and Esther belonged to the chamber with the other Jewish entrepreneurs and made their mark on the town.

I’ll come and take that hat and hold it close to my special family place, Mayn Shtetele Gonzales.

About the Author
Van "Ze'ev" Wallach is a writer in Westchester County, NY. A native of Mission, Texas, he holds an economics degree from Princeton University. His work as a journalist appeared in Advertising Age, the New York Post, Venture, The Journal of Commerce, Newsday, Video Store, the Hollywood Reporter, and the Jewish Daily Forward. A language buff, Van has studied Spanish, Portuguese, Russian, Yiddish and Hebrew, although he can’t speak any of them. He is the author of "A Kosher Dating Odyssey." He is a budding performer at open-mic events.
Related Topics
Related Posts