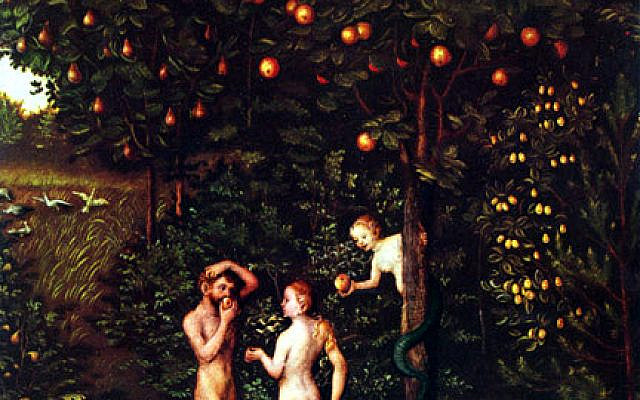 Adam and Eve - Paradise, the fall of man - Lucas Cranach the Elder

How are the trees of knowledge and life organized physically within the garden? Why does the Torah include a location of at least one of the trees with no obvious consequence to the story for the tree’s location?

There are a number of exegetical attempts to resolve this issue using various creative techniques [see Rashi, Ramban, Rabbenu Bachya, Rosh (3:22), to name a few], however their solutions explain away the problem without enlightening the rationale for the textual ambiguity. In recognition of these difficulties I believe the text intended this ambiguity to communicate the visceral experience of the protagonists so the reader can truly comprehend the challenge Adam and Chava faced.

The most parsimonious and elegant answer is not simply that both trees were in the center of the garden, rather the trees were identical, effectively the same species, intertwined at the center of the garden. If both trees are in the center then the posukim do not contradict each other in their descriptions of the trees’ locations. Understanding the trees as identical in appearance and in the same location clarifies the pragmatic challenge facing Adam and Chava in the garden. Explaining why Adam doesn’t hurriedly eat from the tree of life immediately upon his inception as well as the ease with which Chava was able to convince Adam to violate his prohibition.

Eating from the tree of life was the ultimate goal but the inability to distinguish between the two trees was an insurmountable deterrence. Identical trees explain why initially there was no concern that Adam would eat from the tree of life and live forever. The fear of the trees’ ambiguity prevented eating from either. However, once Chava ate and lived, Adam assumed she must have serendipitously eaten from the tree of life, and thus unreservedly ate what he assumed must be the fruit of life. This further explains why it was necessary for Adam’s recognition of his sin and his ultimate expulsion from the garden to happen in rapid succession as now Adam knew good from bad, confident in his choice of the tree of life to live forever; thereby obviating the impending punishment due him for mistakenly eating from the tree of knowledge (3:22). When Chava handed him the first fruit he erroneously assumed she had clarified the ambiguity of the trees, but after his mistake he now knew for certain. Adam’s expulsion from the garden was not simply a punishment as much as it was a necessary consequence of his actions to prevent man from choosing eternal life, bypassing the consequences of his iniquity.

Additionally, the seemingly unnecessary literary ambiguity of the trees’ locations can now be appreciated as the method by which the text communicates to the reader the confusion of the protagonists. Just as the reader is uncertain of the location for which tree brings life and which brings death, then certainly Adam and Chava in the moment would have had reason to fear both trees due to the trees’ ambiguity.