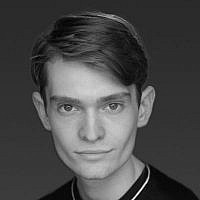 The Blogs
Colin Haskins
Apply for a Blog
Advertisement
Please note that the posts on The Blogs are contributed by third parties. The opinions, facts and any media content in them are presented solely by the authors, and neither The Times of Israel nor its partners assume any responsibility for them. Please contact us in case of abuse. In case of abuse,
Report this post. 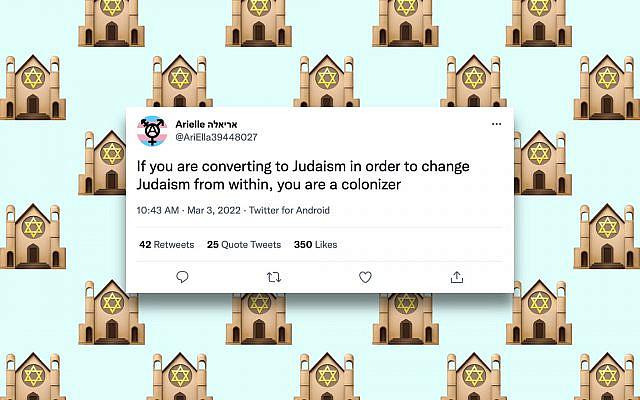 Twitter user @AriElla39448027 describes a phenomenon that does not exist.

Barring an appreciation for a good loaf of challah and a distrust toward “Messianic Judaism,” few things can be agreed upon by all the world’s Jewry today. This makes navigating Jewish life particularly confusing for those not raised Jewish.

Converts to Judaism are supposed to be respected as any other community member. Inquiring into the background of a convert is generally considered taboo. As Rabbi Adam Greenwald once put it, “[I]t’s just like a child being adopted into a family. Once a child is adopted into a family, they are as much the child of their parents as if they had emerged into that family biologically.”

However, in practice, converts often struggle to find their place and feel alienated from the greater Jewish community. This is exacerbated by the community’s sharp divisions and relative insularity. Opinions that stray from the fold are not well received, and all too often, converts are made to feel like their community perceives them to be interloping gentiles with hidden agendas.

This is not psychosomatic, either. A cursory scroll down a particular corner of Jewish Twitter reveals that anti-convert sentiment is alive and well. A particularly deleterious notion running through these Tweets suggests that those who convert to Judaism do so intending to change the community from within. Converts, particularly converts of color, who are critical of Israel and Zionism, are especially vulnerable to this kind of harassment.

Conversion-skeptics are not just a few faceless Twitter users, either. The organization StopAntisemitism.org has also questioned the conversion status of Jewish anti-zionist activists. Disturbingly, attacks on converts appear to be rewarded by social media engagement.

But these attacks are absurd. Of course, no one converts to Judaism to overhaul the Jewish faith. To suggest that this is the case shows a profound lack of understanding of what it means to convert to Judaism.

Judaism is not a universalizing religion; outsiders are not encouraged to convert, and prospective converts are sometimes actively discouraged from converting. Conversion is not taken lightly, neither by the Jewish community nor the convert.

Do those who question converts’ sincerity understand what it means to change one’s life in such a dramatic way? To convert is to change one’s entire perspective on life; to adopt a new ethnicity, family, and culture. It means saying goodbye to the life you knew and trusting that the days that come will be even better, simply because you get to live them as a Jew.

Do these people understand what it is like to receive your Jewish elementary education as an adult? To learn to read all over again? Converts have to seek the decades of Jewish education we missed out on.

Do they understand how it feels to sit alone on Shabbat saying Tehillim, wondering why the words don’t flow naturally out of our mouths like those who have said them since childhood?

Do they know what it is like to stand for the Amidah for the first time in a synagogue, unsure exactly when to bow and bend one’s legs? Do they know how it feels to fear you will not be accepted by the Jewish community?

Convert-bashers no longer make me feel insecure. They do not know what they are talking about, and they have no authority. I live an honest, Jewish life rooted in Jewish tradition and committed to Jewish values. My political opinions do not make me any less Jewish. Halakhah is on my side; they cannot push me away from the derech.

It is perfectly reasonable to disagree with a fellow Jew. You may even abhor those who hold beliefs that you find repugnant. But shame on those who question the sincerity of converts with whom they have a difference of opinion.

About the Author
Colin Haskins is a Global Studies student from Los Angeles focusing on Israel-Palestine and the post-Soviet space. He is a proud convert to Judaism and a connoisseur of vegan burekas.
Related Topics
Related Posts
Comments