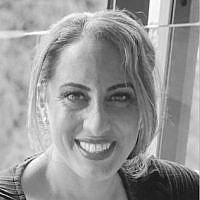 The Blogs
Faranak Margolese
Apply for a Blog
Please note that the posts on The Blogs are contributed by third parties. The opinions, facts and any media content in them are presented solely by the authors, and neither The Times of Israel nor its partners assume any responsibility for them. Please contact us in case of abuse. In case of abuse,
Report this post.

One of the better things I read during this Corona period was a statement that said “Jewish Irony: Pesach canceled because of a plague.”

Indeed we are plagued and in a way that as a people and species we have not been for a long while. And we are compelled to ask why and for what purpose?

On Shabbat, I took a drink from the tap, and I thought how lucky we are that’s there’s no Corona in the water. Imagine. If you really wanted to plague a people, just poison their water. That would be a real plague.

And it occurred to me that that’s exactly what happened in the first plague. The water turned to blood. It became undrinkable. And it brought Egypt to its knees.

We believe that the Torah selectively transmits the lessons that are relevant for all time. But for whatever reason, whenever I learned about the story of the Plagues in Egypt, it seemed literal, as if they were isolated incidents, miracles in a particular time to save our people.

But what if we read them differently? What if they were relevant for all time? What if the water turning to blood wasn’t about blood at all? What if it were a lesson to us all – that our water can turn to blood? That it can become undrinkable – with a virus, with chemicals, with refuse. That can happen to all people at all times throughout history. That would make the Ten Plagues very relevant and somewhat frightening.

And it seems not only that they can happen, but that they are happening. Consider our time. The plagues start with water, but half of them are related to animals – frogs, lice, wild beasts, cattle disease, and locusts. Then consider bird flu, swine flu, mad cow disease, Corona. We have recently been plagued with a seemingly disproportionate number of diseases coming from animals.

If that seems a stretch, we can get literal about it. Want to talk about the plague of Locust? On March 10, 2020 BBC News declared “Hundreds of billions of locusts are swarming through parts of East Africa and South Asia in the worst infestation for a quarter of a century, threatening crops and livelihoods.”

How about arov, (wild beasts)? Since we have retreated into our homes, wildlife all over the world have taken to our streets. Wild pigs roam the streets of Paris; bears have been spotted in California; Thailand has seen hundreds of screaming monkeys on major intersections, and at least one cougar has been spotted in a town in India.

That leaves the plagues of Darkness and the Slaying of the First Born. Darkness doesn’t seem like much of a stretch. Since all this began, my greatest fear was that we would lose electricity. Suddenly, people who would not normally be in their homes are all using electricity at the same time. An overload could send us into darkness. And our generation is particularly ill equipped to deal with that.

Things seem hard now? Imagine your kids without WiFi. Then imagine every house dark at night. No phones and WiFi alone could cause mayhem. Darkness for a week? Even only at night? That could plunge us into social chaos, a real plague.

Even the slaying of the first born seems somewhat at hand. For who else is most vulnerable now but our most elderly? Seniors are being taken in far greater numbers than others.

That only leaves the plagues of nature disasters like hail, and it would be hard to argue that we haven’t experienced our share of those. Recent decades have seen a dramatic increase in the frequency and intensity of natural disasters around the world on an unprecedented scale – fires, tsunamis, floods, earthquakes.

It seems not only that the plagues are here, but that they are here all at once and on a scale like we haven’t seen before to the point that for the first time in ages, life has literally stopped.

Why might that be? Why is this happening? Why on this kind of scale? And why now?

Maybe we can learn from something from considering Pharaoh. Why was he plagued? What was the great crime that warranted so much suffering? In short, he failed to respect and value the basic right to life and freedom all men deserve. He enslaved and thereby stole the greatest gift we have. And he did so for the sake of physical success and pleasure. He put his physical needs and wants before the spiritual rights of other living beings. So G-d afflicted him and deprived him of his freedom and right to life.

Could it be that we are the same? That in some way, we too are Pharaoh?

Even if I were not religious, I would believe in karma, that the world gives you back what you throw into it, and that it often comes back measure for measure. And maybe because I’m a vegetarian, from the moment Corona began and I heard about people eating bats, I felt a certain karma at work. We abuse our natural environment, and it gives us natural disasters. We abuse animals, so we suffer diseases from them. We lock them up in cages for centuries now they roam the streets and we are the ones in cages.

It is no surprise to me then that Corona originated in China, one of the worst offenders of human rights, animal rights, and environmental rights in the world. The suffering we create is the suffering we experience. And for years, we have benefitted from suffering that occurs in China.

We have worn clothes and bought iPhones which we know may have been created by the suffering hands of slave labor, but we are willing to do so for our physical pleasure. In some way, like Pharaoh we prioritize our physical needs and pleasures above our moral sensibilities. And we do so with pride.

Is it unfair to assume that it would come back to haunt us? That if we reap the benefits we may also have to pay the price?

We have benefited from suffering and we are now pay a price. And we are doing so in a way that shows us more clearly than ever before that we cannot turn a blind eye.

Technological advances of the last 100 years have given us unprecedented power. In the past, if we did not respect the environment, animals, or each other, our power to destroy was limited. But today, with technology, we can destroy our entire world in an instant and with the tip of a finger. We not only can do so but we are doing so, and just like Pharaoh, often for prosperity and pleasure.

But while Pharaoh’s misdeeds affected one people, ours affect us all. And on a dramatic scale. He threatened only one nation. We are potentially far worse. We are nations threatening the entire world order and all for the wrong reasons.

At a critical juncture in human history, it is as though G-d Himself has intervened, as if to say “Stop!!!! Hit reset. Don’t be Pharaoh. You are going the wrong way. You cannot afford moral irresponsibility anymore. Respect life. Respect nature. Respect freedom. Because if you don’t you could destroy it all, and that’s not a chance I can take. So I will plague you, as I did Pharaoh, to restore justice, to restore balance, to reset your values and free those who cannot free themselves. I will plague you to save you if you do not save yourselves.”

I don’t know if we are Pharaoh or Egypt, but one thing is certain – G-d has stopped our world like He stopped theirs. We have retreated to the safety of our homes from a hostile environment, just as they must have done to escape lice, frogs and beasts.

And the plagues didn’t stop in Egypt until Pharaoh stopped. When he stopped the persecution of others, when he prioritized basic spiritual and human needs over prosperity and pleasure, he was freed.

And I can’t help but think that perhaps we must do the same – respect the dignity, freedom, and right to life of all living things – human, animal, and environmental – if we to learn from the story of Pesach and save ourselves.

About the Author
Faranak Margolese is a writer and best selling-author of the works Off the Derech and Hayotzim, which explain the phenomenon of observant people leaving Judaism. She has a Masters in Creative Writing from Columbia University's School of the Arts, and has served as a professor at Yeshiva University and Queens College. She now resides in Jerusalem where she has lived for the last 18 years.
Related Topics
Related Posts
Comments