The Blogs
Meira Lerner
Apply for a Blog
Please note that the posts on The Blogs are contributed by third parties. The opinions, facts and any media content in them are presented solely by the authors, and neither The Times of Israel nor its partners assume any responsibility for them. Please contact us in case of abuse. In case of abuse,
Report this post. 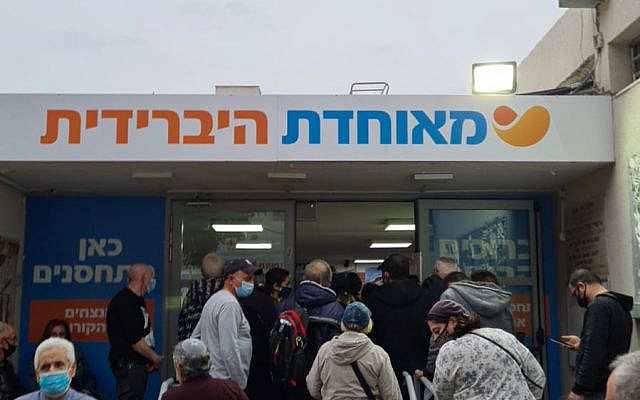 The crowd trying to push their way into the vaccination clinic. (courtesy)

This past Wednesday, I was very lucky to receive my second dose of the Pfizer Covid vaccine. Though I am not in the first phase age group for getting the vaccine I do have some risk factors and was able to get it very early on. While this moment should have been celebratory, it was unfortunately overshadowed by a very dark cloud.

I was scheduled to get my vaccine in Ashdod with my mother. We had gotten our first doses in the Meuchedet clinic there and were told that we needed to get the second dose in the same place. The morning before our appointment, we were told that all of the corona vaccinations were no longer being given at the clinic. Instead, the entire operation had been moved to an empty community center. I can only assume that this was done in order to minimize the crowds at the regular clinic and keep those coming for vaccines separate from those going to their regular doctors’ appointments. My mother and I arrived at the assigned community center/vaccine clinic on time for our 3:45pm appointments. Upon arrival, we noted a large crowd standing around outside. We went to the entrance of the building where a soldier was standing and trying to guide people to ask where we should go next. The soldier told us that unfortunately, the entire communications and internet system had been down for two hours and though they were working on fixing it, they had no idea when the system would be up and the vaccinations would start up again. We were told to wait patiently outside along with all those who had arrived in the two hours before us.

Though everyone was relatively calm when we first arrived, the atmosphere tensed and heated up very quickly. Within a half hour of arriving, people started crowding around the entrance to the building. People started trying to shove their way through. At some point, the administrative staff started giving out hand-written numbers so that people would know what in what order they were going to go in. Then a few people were given computerized numbers. Soon after that it became clear that some part of the system must have started working and they began giving vaccines again. That’s when the situation really devolved. No one knew whose turn it was and when – not the staff or those waiting to be taken in. No one had any answers for anything.

The crowd at the door started growing larger. It was around then that in addition to yelling at the staff about a situation that they likely couldn’t have done anything about, those waiting for their vaccinations started yelling at each other. Now for anyone that lives in Israel, Israelis yelling at and losing patience with each other isn’t anything to be surprised about. It happens, people get upset, they realize that they have some friend in common or served in the same army unit and they hug and move on. This was not the case on Wednesday evening. The gravest moment for me was when a younger man started to try and push his way through to the front of the crowd. He was clearly angry and agitated. An older woman started yelling at him not to push and that she’d been waiting and was there first. The younger man yelled at her, “I need this vaccine more than you. I work in education. I’m on the front line. All you do is sit at home all day!” The older woman responded just as angrily, “I sit at home all day because of your stupid Prime Minister!” That one, 30 second long exchange, showed me just how far we have fallen and how irrevocably changed we are as a people.

We may be seeing a light at the end of the coronavirus tunnel but we are so very far from getting over what it has done to us. Bibi may think that he is safe and will get reelected due to his speedy vaccine operation but he is deluding himself. It may be momentous and impressive but it is very much too little too late. The citizens of Israel are broken down. A nation that has always prided itself on coming together and being there for each other, especially in times of need, is turning against each other. It is beyond one sector blaming another. We are now being forced into categories and classes of an entirely different making. Who deserves to get back to their lives and livelihoods without risk to their health first? No one can doubt the complexity of trying to answer that question. But the answer to it does not leave us in a better place.

For the better part of the past year, we have been used and manipulated and managed as if we were pieces of merchandise or commodities, instead of as individual human beings with needs and lives and struggle. We have watched businesses close down, friends and family lose their jobs and savings, children being shut out of schools. We have been let down by our government and leaders. But we cannot let this break us and destroy who we are. We cannot let the failings of our government lead to us failing as a nation of brothers. It will take everything we have to move past this year of darkness and fear. But we will only be able to move forward together. We need to stand strong and remember our values. But we also need a way to fix the mess that we are in.

We have a chance now to elect a government that we can believe in. A government that works for us instead of for their own agendas. Instead of turning on each other, it’s time to hold our leaders accountable. This election is about so much more than Benjamin Netanyahu. We cannot let parties believe that it is enough to run on an anti-Bibi platform alone. Show us a plan. Show us a way forward and out of this disaster. We have the right to be given some answers and transparency from those who want our votes. We need more than cheap slogans. If you want our votes, work for them. We deserve so much better than what we’re getting. So to all of the party leaders who want to be voted into government this March – you’re all on notice. Step up and show us what you’re really made of.

About the Author
Meira is a married mother of 3 living in Modiin. She is a licensed nurse and has most recently run campaign operations at a fundraising start-up. She is also a very passionate Zionist with a keen interest in politics and Israel advocacy. Meira is the creator of The Civil Discourse Project - a video podcast aimed at promoting civil, respectful discussion between people with opposing views on current, topical issues. She is also the founder of Israeli Politics. Simplified. - a Facebook page aiming to help Anglos better understand the Israeli political landscape in a way that is simple, approachable and easy to understand.
Related Topics
Related Posts
Comments