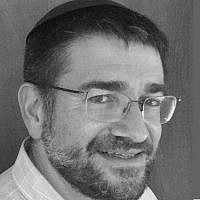 The Blogs
David Blass
Apply for a Blog
Please note that the posts on The Blogs are contributed by third parties. The opinions, facts and any media content in them are presented solely by the authors, and neither The Times of Israel nor its partners assume any responsibility for them. Please contact us in case of abuse. In case of abuse,
Report this post.

Israel is unfortunately but predictably experiencing a surge in new Corona cases. After an initial campaign that successfully halted the virus – albeit at a staggering economic and social cost – we are experiencing an alarming resurgence of cases in the wake of “opening up”. As any observer can note, the percentage of people adhering to social distancing and effective mask-wearing is unfortunately very low. This appears to be true in all population sectors.

The combination of three factors – the relaxing of government restrictions, an insufficiently disciplined and untrained population, and the ongoing presence of the virus to any degree within the population – inevitably leads to a rapid increase in cases. This virus follows a determined and deadly – but highly predictable – course of action.

The COVID-19 deploys an impressive toolkit of weapons, including airborne transmission, asymptomatic carriage with silent transmission to unsuspecting contacts, and a lengthy incubation period during which as yet asymptomatic patients can infect others. All of these combine to create a truly formidable pathogen.

At the same time, Coronavirus is limited to these weapons alone. Experience has shown that individuals and groups which adopt a code of behavior designed to neutralize these weapons, do manage to significantly limit the spread of the virus, without resorting to suffocating restrictions or intensive policing.

Therefore, Israel’s government efforts moving forward must aggressively pursue the goal of influencing the population’s code of behavior. New policies and creative ideas must be developed to foster a culture of discipline and compliance. Education and policing are indeed a part of this, but alone they are woefully insufficient for the long run. Finding a way to influence and change our society’s behavior is in reality our only hope of keeping society functioning while controlling active Corona, until such time as a vaccine is developed.

Winning the battle against Corona is more about human psychology and behavior than about microbiology. Microbiology sets the parameters needed to control the virus – two meters, masks, social distancing, 2 weeks, and the like. But the ability to change human behavior in a consistent and sustained way will ultimately be the key to victory. Methods proven to mold and change human behavior need to be identified and harnessed.

Once this goal of immediate modification of group behavior is defined and accepted, necessary tactics naturally emerge. As our kids would say, social distancing and mask-wearing need to become cool. I will briefly outline a skeleton of what such a strategy should entail.

A. Any new restrictions and closing of the economy and education system needed to stem the tide of the current surge, must be viewed as only a short-term tactic and not as a replacement for a coordinated strategy for widespread behavior change.

B. The government must immediately initiate a massive advertising campaign, recruiting figures of influence from every sector of society – media celebrities, athletes, music and film stars, religious and intellectual leaders – blanketing the airwaves and Internet with culturally relevant and highly attractive messages encouraging the necessary behaviors. The focus is not education per se, but behavior change, using the most sophisticated tools of the advertising industry. Of course the full range of demographic sub-groups need to be adequately targeted.

C. The unique and powerful ability of the media to influence public health behavior must be harnessed in two ways. First, all images and messages which explicitly or implicitly undermine the public health standards being promoted, must be limited. All forms of media should be encouraged to adopt policies that avoid images and messages which undermine public health efforts. Pictures of leaders, media figures and others, not adhering to social distancing or mask-wearing, should not be tolerated in the public arena for now.

Second, steps must be taken to encourage the media to actively promote the recommended public health behaviors. Mask-wearing and social distancing can be universally portrayed in the print and visual media as a matter of course, conveying the message that there is a new reality and a consequent new behavioral norm. Product advertisements and photographs can do this as well. Capitalizing upon this opportunity would extend the media’s historic public health role in fighting tobacco use, drug abuse and suicide.

D. Enforcement efforts should particularly target public indoor venues – schools, shopping areas, event halls, places of worship, nursing and group homes, and of course heath care facilities – venues already proven to initiate and perpetuate widespread outbreaks. A combination of powerful incentives and punishments should be adopted. These efforts should be designed to be large-scale and for the foreseeable future.

E. The government should immediately create a framework of liaison with each significant demographic subgroup, through which strategies will be developed to successfully disseminate public health information, and to effectively harness the culturally relevant modes of communication for that sub-community. This framework of liaison can help monitor the public health performance of each subgroup, quickly identifying areas where increased efforts are needed, in advance of further outbreaks of cases.

The advent of a safe and effective vaccine will be the coup de grâce of Corona. Until then, the government must adopt a program based upon the above principles to immediately and effectively influence public behavior on a massive scale. Dire warnings and education alone are inadequate to effect such change, as can be seen during this current resurgence. Without such an effort, our society is inevitably doomed to repeat the current cycle of devastating societal closure and virus-control alternating with societal opening-up and the near-immediate resurgence of Corona. Breaking this cycle and enabling society to function alongside Corona will only occur once the government adopts a strategy such the one outlined here.

About the Author
David Blass MD is a psychiatrist and Unit Director of the NeuroBehavioral Unit at the Abarbanel Mental Health Center, Bat Yam.
Related Topics
Related Posts
Comments