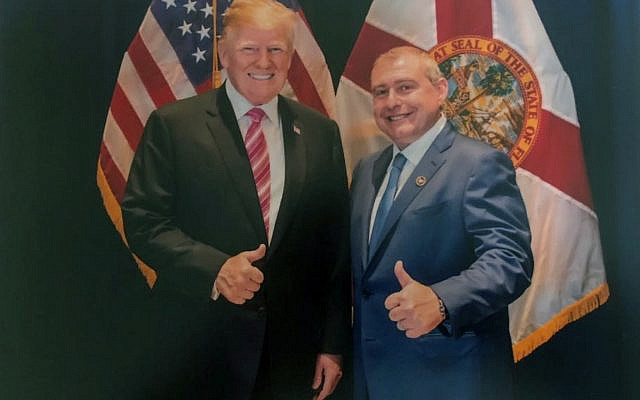 This undated image, released by the US House Judiciary Committee from documents provided by Lev Parnas to the committee in the impeachment probe against US President Donald Trump, shows a photo of Lev Parnas with Trump in Florida. Parnas, a close associate of Trump's personal lawyer Rudy Giuliani is claiming Trump was directly involved in the effort to pressure Ukraine to investigate Democratic rival Joe Biden. Trump on January 16, 2020, repeated denials that he is acquainted with Parnas, despite numerous photos of the two men together. (House Judiciary Committee via AP)

I owe Times of Israel readers an apology.

Last Friday, I wasted your time with an analysis of the shift in Israeli media terminology from calling Trump’s putative project for Israeli-Palestinian peace a plan rather than the deal of the century that he promised. I argued that a plan is easy to propose, but getting the agreement to make it a deal is a horse of a very different color.

Then came the Bibi-dee/Benny-dum act, competing who would get to the White House first for a photo op of the grand unveiling and who would outdo the other in sycophantic hosannas to Israel’s Best Friend Forever.

My epiphany was assisted by a reminder from that delectably shady character with the evocative Jewish surname, Lev Parnas.* From under the bus where Trump and Rudy Giuliani had thrown him, Parnas underlined what we already should have known. The concession that Parnas was deputized to extort from Ukraine was not an actual investigation of Joe Biden or his son. It was only an announcement of such an investigation, which would suffice to smear Trump’s most threatening potential rival in this year’s US election. The Parnas Principle: It’s not what you do, it’s what you announce.

Thirty years ago this month, Israeli VIPs were busily shredding their signed photos with Nicolae Ceaușescu. Until his overthrow and execution in the Christmas Revolution of 1989, the Romanian tyrant had been lauded here as Israel’s BFF – at least among the Warsaw Pact leaders, of whom he was the only one not to sever relations with Israel in 1967. But now no self-respecting Israeli leader would admit ever having befriended him, after the exposure of his horrific excesses on his own citizens, his taking Romanian Jews hostage for Israeli favors, and his even closer connection with the PLO – which was the last to defend him (I attended its press conference while covering the revolution in Bucharest).

Trump’s Ceaușescu moment (removal, not — has ve-halilah — execution) is still unlikely to come this month, despite the bravura presentations of the House impeachment managers on the Senate floor. It may not come even a year from now, when a US president is sworn in for the next term: Trump still might — with Russian support, which the Senate will rule as OK — win the electoral college, despite losing the popular vote. But it is sure to come in five years at most, unless he pulls off a Putinesque constitutional “reform” and appoints himself president-for-life, or simply refuses to leave. Alan Dershowitz might find legal cover even for that, but it’s still a remote nightmare.

So sooner or not very much later, posturing with Trump is going to backfire when he is recognized not only as America’s worst and most corrupt president, but also as nothing like Israel’s best friend — certainly not forever. Meanwhile, pardon me for repeating the obvious: his “plan” is not going to improve prospects for peace in our neighborhood, much less achieve a peace deal. But what I failed to stress on Friday was that it was never meant to do this.

One can only hope that it doesn’t spark intensified violence, just as Trump’s repudiation of Obama’s deal with Iran was a grand gesture, but has brought the latter’s nuclear capability much closer. Likewise, judging by past performance, Bibi will probably chicken out of actually annexing anything – announcing it for some future day will do. Will it help get him temporary immunity, or improve his electoral prospects by distracting attention from his equivalent of impeachment? His chances look better than Trump’s in this regard: to the extent that the US audience is following political news this week, this object is not shiny enough to outshine the Senate hearings or the Iowa caucuses. But if Netanyahu pulls it off, he will be stuck forever with a badge of dishonor as Trump’s BFF. You lie down with fleas, you get up with the dog.

So, Mr. Gantz, if you must pose with Trump and endorse his “plan,” my advice is not to display the picture. The nail you hang it on may leave a big hole when you have to take it down.

*Parnas: a Talmudic term for a community elder or magistrate. How timely to paraphrase the dictum of Rabbi Shimon ben Yehotzadak (Yoma 22b): every parnas drags a record of offenses behind him, so that if he gets too uppity he can be taken down.