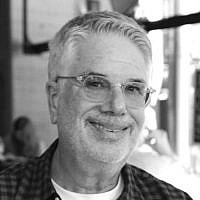 For the last decade, I have been gliding on the surface of the Jewish world, dipping in when I choose, but mostly floating beyond. I have stayed somewhat distant from the activist role I once poured into the organized Jewish community that had been the heartbeat of my life. I needed a break after twenty years of marketing Jewish organizations in America, Canada, Israel and around the globe.

A whole new world had been offered to me, which I grabbed. I began teaching in the Masters program at the USC-Annenberg School of Communication. The University, its faculty and students embraced my knowledge and experience as opposed to the organized Jewish world, a times a tough place where people were always questioning and positing how much more they knew than I did. I often found it to be an even more difficult environment to work in that I did with past clients such as Apple and Coca Cola.

In my new life at USC, I was now surrounded by diverse American and international students and faculty, stimulated with new issues and questions, throwing myself into on-campus involvements and enjoying professional travel to China and parts of the Middle-East where my graduates brought me to consult. I hosted global gatherings at my home called Creative Sunday Mornings. And through all this new exposure, I began a professional emergence back into the business world. I found this new life to be a welcome balance and relief from the relentlessly pounding beat of Jewish, Jewish, Jewish.

But then in the last year, a sliver of Jewish passion invaded. I realized I had lost the wonderful, embracing and ever growing Jewish network I once had. It didn’t just stop. It had shriveled. I was no longer in touch with so many of the Jewish activists in LA, throughout the US, Canada, across the world and in Israel, who for decades had been the anchors of my life. I had given them up. I realized I was missing them. I was missing being inside the fold. I was missing the connection and the interaction. I was missing the sense of security that I had these kinds of people in my life.

And then came COVID-19 and my Jewish awakening.

I was driving through LA at 4 p.m., an hour where I would normally be screaming at Waze telling it that I knew the city’s traffic patterns better than it did, swerving off main boulevards, into side streets, arriving at an intersection where I knew there was a traffic light without many cars, darting across to the other side, only to turn back, then right, then left, returning to the main street having saved three minutes. But now the streets were empty, traffic was non-existent, not a person on the street, not an open store, and it felt like a bomb had dropped. Eerie as hell. And suddenly, I flashed on Eicha, the Tisha B’Av lamentation.

Oh, how the city that was once so populous remains lonely.
She has become like a widow.
She that was great among the nations, a princess among the provinces
Has become like a tributary.
She weeps in the night and her tears are upon her cheek.

I realized at that second that Jewish life had prepared me for this COVID-19 moment, given me a path how to deal. The COVID-19 preparations of university life, which were technical ones, couldn’t compare. Jewish life had enshrined a reality, as it often does, that the world can be a cruel and difficult place. But it also enshrined hope, and a constructive way to direct our emotions into a healing and connective process.

Then over the next few days, the Jewish world began to align to take care of me in more ways specifically for this period, over and over.

A few weeks before the COVID-19 crisis began, having felt the sadness of abandoning my Jewish network, I responded to the offer of an online Torah class with the Wexner Heritage Foundation from which I graduated, 18 years ago. I had not had an interaction with Wexner or with Torah study in years. But with the crisis, I completely forgot about having signed up until I was pinged on my calendar. The timing couldn’t have been more perfect, this being the first week of isolation. When I entered the Zoom meeting and saw the screen fill with people I had not been with in years, I realized no matter how distant I had made myself, I was connected here. I was part of these people. And when Rabbi Yaffa Epstein began the study, it all felt familiar and comforting. I knew where I was. I knew how to do this. And I needed it now. I had to hold back the tears.

I also needed the Zoom Havdalah two days later with our kids, grandchildren, and the extended family. Three generations and 50 people joined from the US to Israel. I realized that Jewish life again, not only gave me a connection, but a path, a meaningful way to be connected and calmed, to believe in goodness, so needed right now.

As then the synagogue that I barely go to became a lifeline. Online pre-Shabbat cocktail parties. Hevruta Torah study. Singing. Music. Second Seder. And people, all needing to be with one another. I’ve done more with them online in the last three weeks than I have in person during the last ten years.

But the biggest gift from the Jewish world during this period was the return of my network of Jewish activists which I realized I loved, have missed and naively gave up for a different life. Several days into the isolation, I began to receive emails, texts and calls from people I had fallen out of touch with all over the globe. “Gary, haven’t spoken in a long time. I want to make sure you’re okay.” They didn’t need to reach out to me. I abandoned them. But they didn’t abandon me. And now I have begun to reach out to others. As tragic as this pandemic is, it is becoming a perfect Jewish storm for me.

So this is what it has taken to wake up to the precious nature of my connection to the Jewish world. I pray to the God of Israel I stay healthy and alive to jump back in when this is all over. And so does everyone else.

About the Author
The National Library of Israel recently established the Gary Wexler Archive, twenty years of communication and marketing materials for the Jewish world. Gary recently spent ten years as a professor in the Masters program at the USC-Annenberg School of Communication. His first profession was as a copywriter and creative director writing award winning campaigns for clients ranging from Apple to Coca Cola.
Related Topics
Related Posts
Gary Wexler
Comments