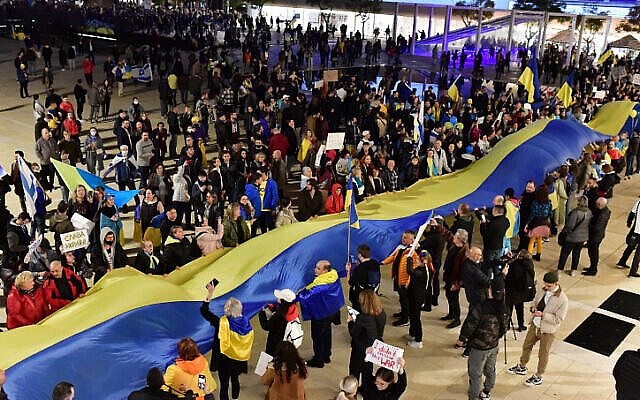 Demonstrators carry placards and flags during a protest march against the Russian invasion of Ukraine, in Tel Aviv, on February 26, 2022 (Tomer Neuberg/Flash90)

“Crisis occurs when the old does not die and the new is not born,” with this phrase the renowned German playwright and poet Bertolt Brecht sums up what a “crisis” means. The crisis has begun, the war has begun.

Brecht is credited by some with a poem that is housed in the Holocaust Memorial Museum. But the authorship rests in the name of his fellow countryman, the Lutheran pastor Martin Niemöller. In the end it is not so much the authorship of the poem that is relevant as its relevance.

These words are as real as they are fresh. First they came for the Ukrainians, and I said nothing, because I was not Ukrainian? I’m sure there are those who wonder and those who doubt it. The fact is that the human, humanitarian and humanity crisis does not cease. We are no longer on the verge of a third Great War, but rather spectators, and perhaps, in the eventuality, an active part of it.

There are those who claim that it was NATO that tempted Putin, but they forget that it was Putin himself who seized the Crimean peninsula, until then part of Ukraine. And yet many in Crimea covered their mouths on 13 March 2014 in protest against the Russian forces, claiming that the peninsula was part of their country.

In February of that year, Putin began a war plan in Armyansk and Chongar, the two main road junctions between mainland Ukraine and the Crimean peninsula. Plans from February this year were also found in which it is clear that Russia was already planning to take Donetsk and Lugansk with a view to Kiev.

Like Hitler, Putin is claiming territories that stand for something as abstract as a sentiment, in this case “Panslavism”, which refers to the political and cultural movement based on the feeling of cultural and historical unity of the Slavic peoples and which aims to restore their political unity. This gives rise to Russian totalitarianism under the tsars and then Stalin’s Soviet totalitarianism in principle.

Putin is now advocating the revival of these ideals. Belarus, for example, is already part of this plan. It is not a consequence that the dictator, oppressor and repressed Lukashenko is Putin’s strategic ally. Belarus has arbitrarily lent itself in favor of Russia and to the detriment of Ukraine. The Minsk Protocol is nothing more than that. The Belarusian journalist, Tadeusz Giczan, even filmed the Belarusian tyrant pointing out what would be the strategic map of the plan to invade Ukraine.

Similarly, the fact that NATO did not accept Ukraine from the outset shows its fear of Putin. In just 10 days of Russia’s onslaught against Ukraine, a new migration crisis is almost unheard of. One and a half million people have had to flee their hometowns and have ended up scattered to other nations, in principle, in Europe.

So if we say nothing, who will be left to speak for us?