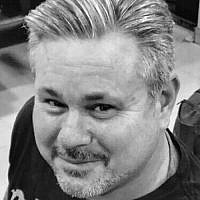 The Blogs
Todd Aarons
Apply for a Blog
Advertisement
Please note that the posts on The Blogs are contributed by third parties. The opinions, facts and any media content in them are presented solely by the authors, and neither The Times of Israel nor its partners assume any responsibility for them. Please contact us in case of abuse. In case of abuse,
Report this post. 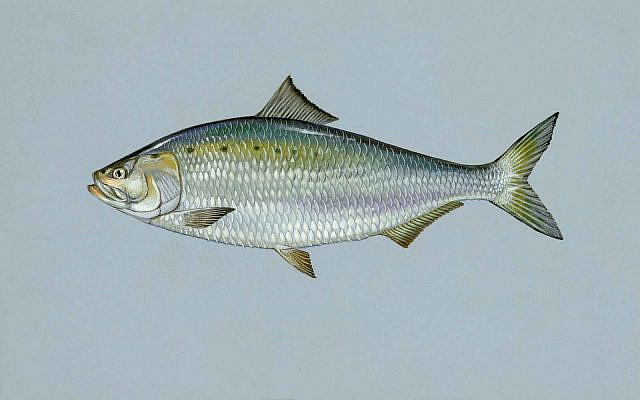 “So what do you suppose I ought to write about?”I quizzed my partner in restaurant business insanity. I’m going to level with you. This is the first time I have written in a while and I don’t really know if anyone would really give a rat’s ass about what I have to say about food. Who the hell is this guy anyway and why do I need to pay him any mind…he’s not on any TV food network or the winner of any reality show competition right? As Chuck D once said, “Don’t believe the hype.” All the world needs now for the final straw to bring about Armageddon is another food blogger, right?

“Just give them an introduction, a taste. It’s Hanukkah time, so spread some light then throw in a recipe that is cool and different,” he says. Then he thought about it a minute and said, “how the fuck do I know what you should write, you’re the chef.”

While I am not in it to win any popularity contests, I can promise that what you read will be from my still-not-jaded heart and the well of my culinary knowledge gained through the eyes of a long, continuous 26 year cooking career. I am a chef who has been in the trenches reliving in revelation the written word of George Orwell’s Down and Out In London and Paris and the insightful prose of our recently fallen hero, Anthony Bourdain. I hope I can educate, amuse, and occasionally inspire.

Here is my attempt to let you in on a little bit about me and what makes me tick followed by what I think is an amazing twist on a Hanukkah classic.

So who am I if not yet another self-appointed food expert. This is what you need to know: I belong to a band of brothers made up of artists of the culinary world who, like metal sculptors, pay with their daily injuries of burns from hot steel and iron. On my wooden Japanese Saya knife cover is written Cortadas y Quemadas, Spanish for cuts and burns. Forged from fire, sweat, and blood, professional cooks endure the injuries of their trade because their passion outweighs the real threats of lifetime scars. We all have them usually displayed proudly and if you were a fly on the wall at a staff barbeque with a bunch of cooks eventually the conversation would become a contest of who has the worst evidence of mangled flesh caught in the line of duty. We chalk them up as turning points, as bookmarks of lessons learned and hopefully never repeated.

Cortadas y Quemadas, cuts and burns, are the afflictions that bond us together as a fraternity of cooks. It is a mindset that allows us to identify with our daily struggle and commitment to produce from scratch plates of food that have vision, philosophy, and integrity. Every order that comes beckoning needs to be prepared. Every customer wanting to be nurtured and satiated from their desire to end their hunger and feel restored we answer willingly and enthusiastically. We fill the void created by loveless food prepared by miserable people who don’t give a fuck. We bear the marks of cuts and burns because we work hard every service to accomplish this chosen path. At the end of the day the fond aches of our legs or the nonexistent arch left in our feet, along with a sincerely felt “thank you for that unforgettable meal” from a customer, is our reward.

Growing up in Los Angeles, the Mexican culture and language cannot be escaped. My mindset and earliest culinary memories are of Mexican food because of youthful days of kicking it with my friends from the neighborhood. My hood like many others was a mix up of Filipino, Mexican, and Korean cultures, not to mention my Eastern European Jewish flair for corned beef, chopped liver, and matzo ball soup. Eating the foods that my friend’s moms were preparing at their homes such as Korean ssam, Mexican birria, and Filipino lumpia or adobo. 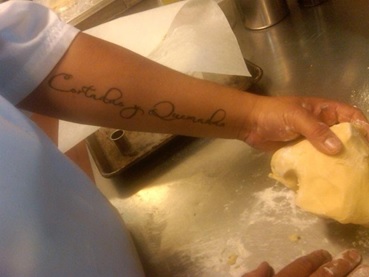 Just as it was in my youth, my professional kitchen was also filled with the guys from the hood. The phrase Cortadas y Quemadas, which my Sous Chef Eric Cancino had tattooed along his arm, became the perfect sentiment capturing succinctly who we are as a team of cooks and chefs so we adopted it and internalized it and now its permanently inked across my heart and mind.

So to keep it real this Hanukkah – and I am trying hard not to sound like a Rachel Ray Hanukkah episode – here is one of my all-time favorite pairings for potato latkes. I first learned about Greek, Turkish taramasalata (known to Israelis as Ikra) from my chef mentor Peter Hoffman of the Savoy restaurant in New York City. I was introduced to this briny carp roe mayonnaise made from the tarama, Turkish for “soft roe”, olive oil, and lemon juice when it was shad season in early spring in the northeast. Shad is the number one food fish of the Hudson River. We would, in the native Micmac Indian way, take planks of oak or birch wood and nail down an open filleted shad exposing its grayish white oily meat like a stretched canvas across the rectangular plank of wood. We would then lay the plank against the brick hearth inside the open wood fireplace in the dining room at the restaurant and watch the fish glisten and brown from the heat of the flames.

Peter would serve thick round wedges of fried potato chips with a fresh dollop of the pinkish orange tinted taramasalata, carp roe mayonnaise right on top next to the smoke infused planked shad. From the moment I first tasted that fried thickly cut potato chip with that wonderfully salty, creamy olive oil infused sauce, my mind was blown. All the classical wisdom was instantly revealed. Of course, mayonnaise and french fries like in Belgium but with the added depth of umami from the carp roe, it became ethereal.

Now when I fry up a great potato latke (see a sure but true and simple recipe below) I recreate that sensational pairing. Potato latkes make amazing vehicles for Spanish tapas or even Greek mezze so we host a cocktail party to spin the dreidel and I end up downing lots of fried latkes. I often include smoked salmon, a quick salmon tartare, or trout as additional toppings for these latkes. Because of the celebratory aspect of Hanukkah and the fried foods especially with smoked salmon or salmon gravlax, I like to dress up my wife’s Yemenite family’s bathtub Arak, an ouzo-like liquor and fresh grapefruit juice Israeli staple by turning it into a champagne cocktail. Fancy. Eat your heart out Rachel Ray.

I like to use butter potatoes here in Israel or good old russet potatoes in the US of A. In England, a Maras Piper potato will do the trick. We are looking for non-waxy starchy potatoes. I julienne my potatoes on a Japanese mandolin Benriner well known to kitchen brigades everywhere.

Grate onions first in a food processor fitted with a large grater attachment or on a cheese grater large grate side. Place into a clean lint free kitchen towel and turn and squeeze the towel until all excess liquid comes out of the onions, Now do the same for the potatoes and mix both into a bowl. Add the black pepper and beaten eggs. Mix well. Save salt for later, it will only draw more water out into the mix. Now here is the variable to creating light not heavy potato latkes. Because all potatoes have different water and starch contents the amount of flour will fluctuate. Sprinkle the flour 1 Tablespoon at a time and mix with a fork until you can grab some grated mix and squeeze into a clump inside your hand that will hold together and not fall apart. When you feel you got it right fry a sample off in your pan. The batter should stay together and is easy to flip without falling apart. Place about a hefty over filled tablespoon of batter into a hot oil filled fry pan. Sprinkle some fine sea salt over the tops of the cooking latkes and flip when the first side becomes golden brown.

In a blender add roe, mustard, lemon juice. Combine oils and, in a thin stream, add to roe mix while blender is on medium speed. As mixture emulsifies and thickens like mayonnaise, add water as needed a little at a time until creamy and thick enough to spoon on top of latke. Before turning off add chives to blend in but not puree, Blend for 10 seconds only.

Zest of one lemon

For those who like it spicy add minced fresh jalapeno

Garnish with crème fraîche or, as we called it at home, sour cream

Gently brined salmon accentuates sweet and salty notes to the salmon, almost lox like. In a small pot place 1 cup of the water the salt and sugar and simmer to dissolve grains. Pour in the remaining 2 cups of cold water so it cools down in temperature quickly. It should be cool to touch. If not, refrigerate a bit before placing salmon piece into the brine solution. Place soaking salmon filet into refrigerator for at least an hour and no more than 3 hours. Remove filet and dry with paper towels. Slice filet into thin slices and then into small cubes about 3-4 mm thick. Add olive oil, shallots, lemon zest, chives and jalapeno mix and adjust with reserved sea salt to taste.

1 oz. Vodka Finlandia or Grey Goose and above

Combine juice, vodka, syrup and arak in an ice filled shaker. Shake and strain into a flute. Top with champagne and garnish with a quarter slice of grapefruit.

About the Author
Todd Aarons is a professionally trained chef who made aliyah in 2015. Starting his career as a chef in non-kosher kitchens in Italy, France, New York City, and San Francisco, Todd has been an innovator in kosher cuisine since creating Tierra Sur at Herzog Wine Cellars in California. He is currently co-founder of Grand & Greene Hospitality Group and chef of Bodega American Kitchen in Tel Aviv (www.facebook.com/getbodega).
Related Topics
Related Posts
Comments