Are you a man? Jewish or otherwise? Have you been circumcised? Guess what…? Something is wrong with you. Something inhumane was done to you. You were violated. That’s right, you were molested; even raped as a child. Do you know how I know? Twitter told me so.

It’s true, Twitter is obsessed with circumcision. At any given time of the day, one can search the word ‘circumcision’ on Twitter and there will be 10-20 comments on the topic posted within the last hour. And the majority of them will contain language such as ‘rape’, ‘molestation’, or ‘violation’. But lurking just below the surface of this language is much more.

I’ve been active on social media for some time now. I’ve made my voice heard in support of Brit Milah on Facebook and LinkedIn. In doing so, I’ve met my fair share of both supporters and detractors. Facebook has a large constituency arguing both for and against circumcision. Interestingly, the pro camp is committed to defending the procedure from a strictly medical perspective. They argue, quite convincingly, that there is plenty of medical backing for circumcision. And they work tirelessly to make their voice heard over the detractors. They spend hours defending innocent people who have posted about their son’s circumcision and who are subsequently bullied and attacked for making this wise decision.

But Twitter is different. I realized a few months ago, that there was no reason not to post my articles there as well. However, the experience has been markedly different. At first, there was no response. And then I caught the attention of some of ‘these’ people.

I quickly learned two things from these debates: there are pro-circumcision groups on Twitter and the anti-circumcision movement is antisemitic.

The arguments on Twitter can be endless, lasting upwards of days, and most of the time I’m going it alone. The first major back and forth consisted of statements such as these: 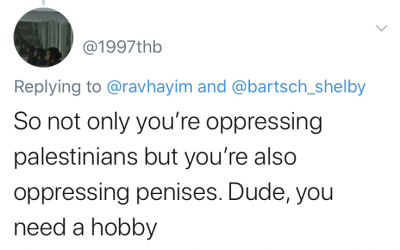 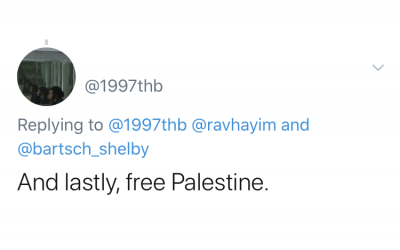 I’m not all surprised by the overlap of anti-Israel and anti-circumcision sentiments but this was only the beginning. After arguing with these people for days, when I felt like I had no more stamina to continue, someone commented: 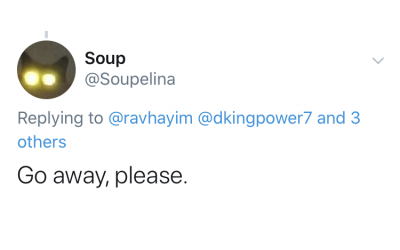 At first, I felt this sense of exhilaration, perceiving this comment as if I was finally wearing them down. In later reflection, I realized this was a broader statement about the Jewish people and this group’s desire for us to disappear. Now, that may seem like a stretch but the second round of debates showed this to be true. They hate Jews. Take for example these comments: 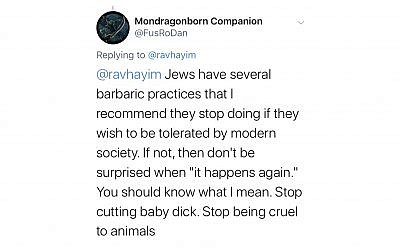 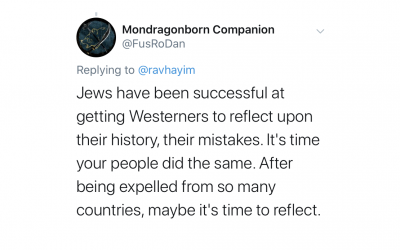 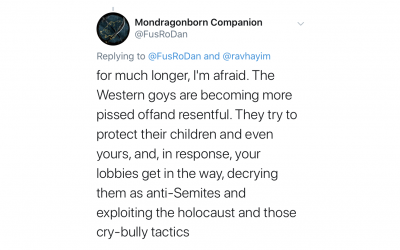 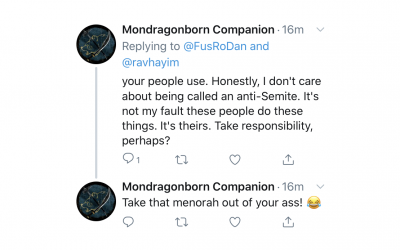 These people think we are insane members of a cult. And if you don’t believe me take a look at this: 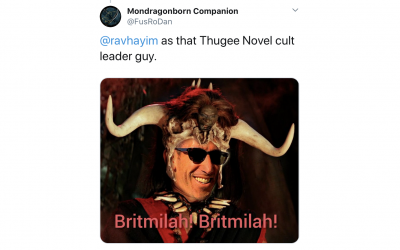 That’s right, that’s my face on the head of the cult leader in the movie ‘Indiana Jones and The Temple of Doom’ who tore the hearts out of his human sacrifices. I’m sure Steven Spielberg would get a kick out of one of his own being dehumanized through his work.

Sadly, this is our reality — overt antisemitism. But we are not powerless in these situations. I reported Mondragonborn Companion to the FBI. A heated debate is one thing, but threats of violence are a line in the sand.

Don’t get me wrong, I am fully aware that arguing with these people will have little or no effect on them but I continue to debate for those in the gray. My responses are not intended as a conversation. They are for the unknowledgeable who may read the back and forth. There are many people who have no opinion either way about circumcision and if we don’t stand up for our religious freedoms, then the middle road will easily be persuaded. And when public opinion sways against us, then a full circumcision ban will pass in Sweden and other parts of Europe which are already having these deliberations.

During this Hannukah season, where the Hellinists attempted to abolish our freedom of religion, and many Jews attempted to reverse their Brit Milah, we need to stand up to those who oppose us. We need to remind the world that we are Jewish and proud of it. So, tonight, burn your lights brightly and publicly so all can see that we haven’t gone anywhere — and never will.