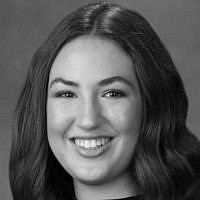 The Blogs
Michali Cohen
Apply for a Blog
Please note that the posts on The Blogs are contributed by third parties. The opinions, facts and any media content in them are presented solely by the authors, and neither The Times of Israel nor its partners assume any responsibility for them. Please contact us in case of abuse. In case of abuse,
Report this post.

Today in Israel, the red Star of David is a well-known sign and a welcome reminder that trained professionals and volunteers stand at the ready to assist people in case of any life-threatening emergency. Magen David Adom (MDA, which translates to Red Shield of David), Israel’s national EMS, blood-services, and disaster-relief organization, stays true to its namesake by effectively responding to Israel’s crises — big and small — wherever and whenever they occur.

Even when MDA paramedics and EMTs are at a perceived disadvantage — needing to reach remote or isolated areas in situations where life or death can be determined in a matter of seconds — they consistently demonstrate ingenuity and determination to beat the odds and save lives throughout the Jewish homeland.

Under the British Mandate of 1920, Jews had no territorial-wide medical services. About a decade later, following horrendous violence between Jews and Arabs, seven Tel Aviv doctors founded the first branch of MDA on 7 June, 1930 with the goal of providing the Jews of Palestine with first responders and immediate access to emergency medical care when disaster struck. Finally, Jews of the time had a Magen – a shield – to help protect them.

Two more branches opened shortly thereafter, in Haifa in 1931 and another in Jerusalem in 1934. By 1935, all three branches united to form a nationwide, cohesive emergency services organization. Throughout the 1930s and ‘40s, Magen David Adom served the public, as well as provided emergency first aid to the soldiers of the main Jewish military organization in British controlled Palestine, known as the Haganah. 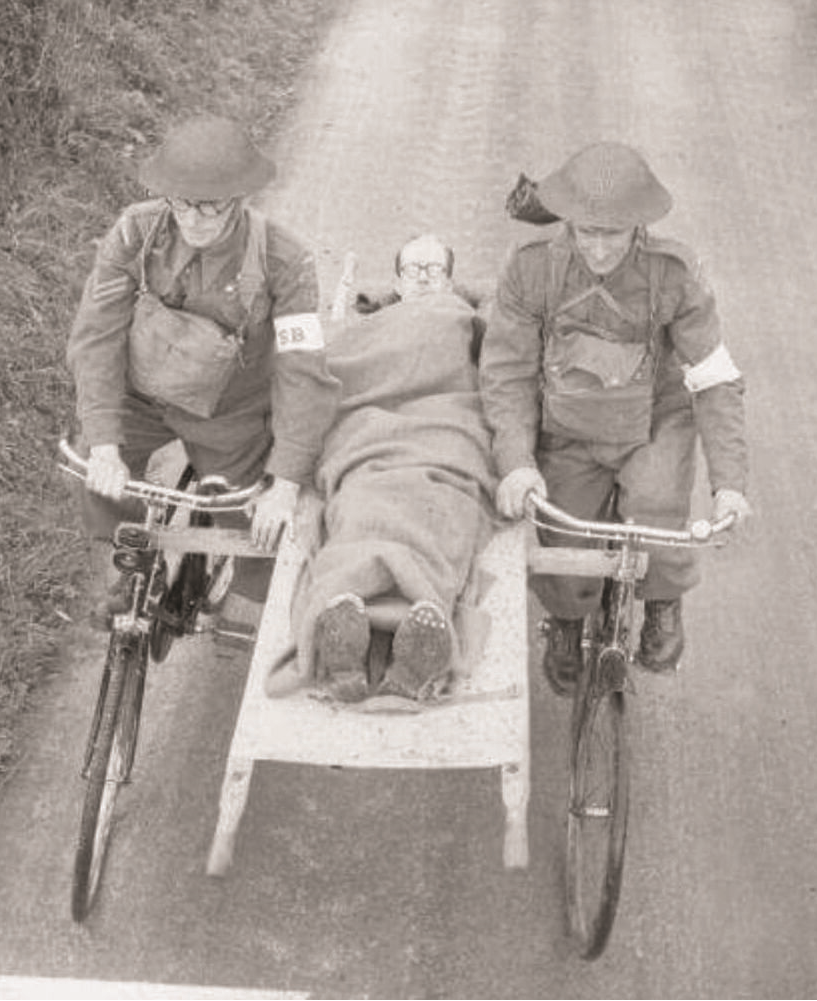 Motorcycles and bicycles are introduced to help transport the injured in 1930 in pre-state Palestine. Photo by Magen David Adom.

During its infancy, MDA had to make due with a severe lack of resources. They modified small trucks to use as ambulances and even converted bicycles to be able to transport the wounded and those in need of immediate medical attention. When the British vacated following Israel’s formal independence in 1948, abandoned British automobiles and motorcycles, some leftover from World War II, were converted into various emergency response vehicles to further support MDA’s mission. Two years later, the Knesset (Israel’s parliament), officially designated MDA as Israel’s National EMS and National Red Cross through the “MDA Law.”

During the 1970s and ‘80s MDA became more and more reliant on their modified motorcycles and during the late 1980s and into the ‘90s, they tested activating volunteers on motorcycles to navigate through Israel’s increasingly congested roadways. These motorcycles, now known as Medicycles, were equipped with lifesaving technologies such as manual ventilators, portable oxygen cylinders, basic life-support, first aid equipment, and in the last 10 years, defibrillators. 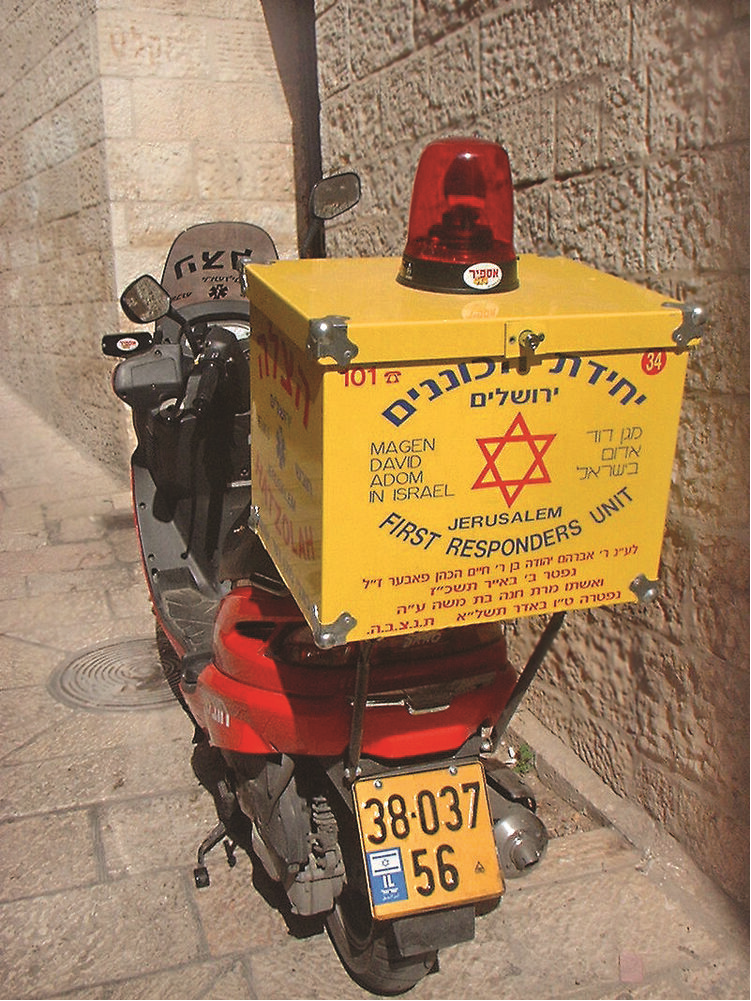 MDA has dozens of motorcycles by the 1980’s, including this one in Jerusalem. Photo by MDA.

In 2000, MDA activated the National First Responders Volunteers Unit, deploying highly trained EMTs and paramedic volunteers, equipped with communication and life support medical kits, as a national network of activists using own their private cars and MDA Medicycles. Despite roadway congestion, MDA’s Medicycles are conveniently (and very fortunately for many people) able to weave through tight traffic and arrive at emergency scenes to assess and provide immediate care before an ambulance surfaces. Even today, decades later, these Medicycles and their successors are still so effective that they are able to respond to an emergency in just two or three minutes. Such near immediate response times are unheard of in many other countries, including even in the United States.

“Dozens of ‘Motorcycle-Ambulances’ will soon be attached to MDA’s fleet of service vehicles. Objective: To shorten the time of arrival for patients and especially those injured on crowded roads.

“Residents of Jerusalem were surprised today to discover,” the 17-year-old article read, “among the Magen David Adom ambulances that secured the Israel Day Parade to the City, a two-wheeled ambulance. The Motorcycle-Ambulance, the first of dozens of new emergency motorcycles to MDA purchased from donated money, with the goal of significantly shortening the time of arrival for patients and the injured, especially on crowded roads. 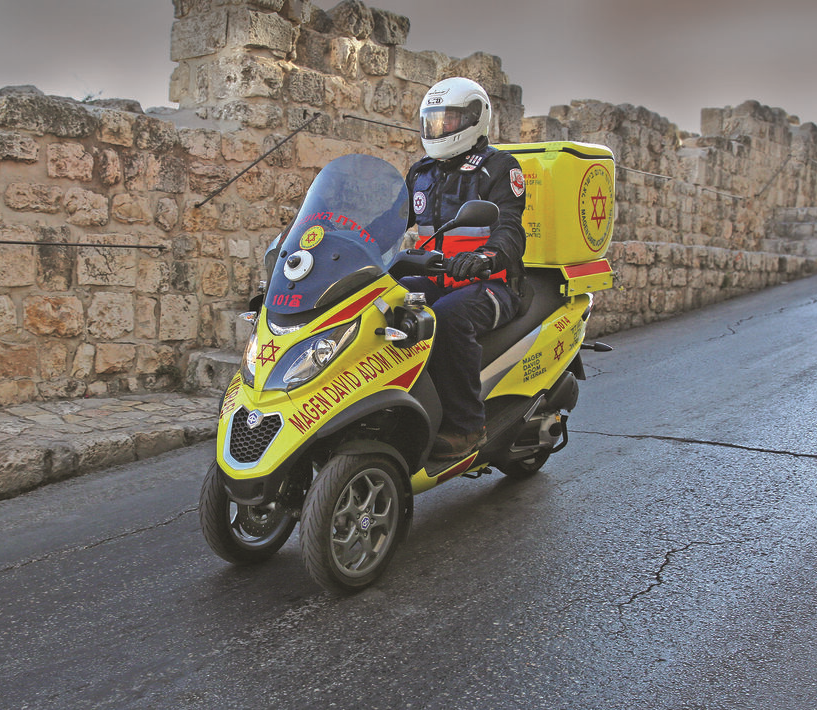 MDA unveils the first ALS Medicycle in 2013, a 500cc model with a large storage unit designed to bring additional equipment to emergency scenes. Photo by MDA.

“Emergency motorcycles will be assigned to first responder volunteers scattered throughout the country. The First Responder Unit, numbering about 7,000 volunteers at present, will be the first force arriving at the scene of an event that will begin rescue and resuscitation operations until the extended ambulance crew arrives.

“According to the plan, the new emergency motorcycle will provide adequate response in city centers suffering from traffic and traffic congestion, and the ambulance mobility problem. The motorcycles will be equipped [all legally] with first aid kits and CPR, siren, and flashing red light. In the first phase, motorcycle riders will concentrate on motorbikes in city centers across the country and in neighborhoods far from MDA stations.”

All drivers were trained and insured by Magen David Adom.

United Hatzalah, meanwhile, was founded only in August of 2006, nearly three years after MDA officially rolled out its first Medicycle unit and decades after it started using motorcycles to bring paramedics to Israel’s injured and to help Israel’s injured prepare to get to the hospital. 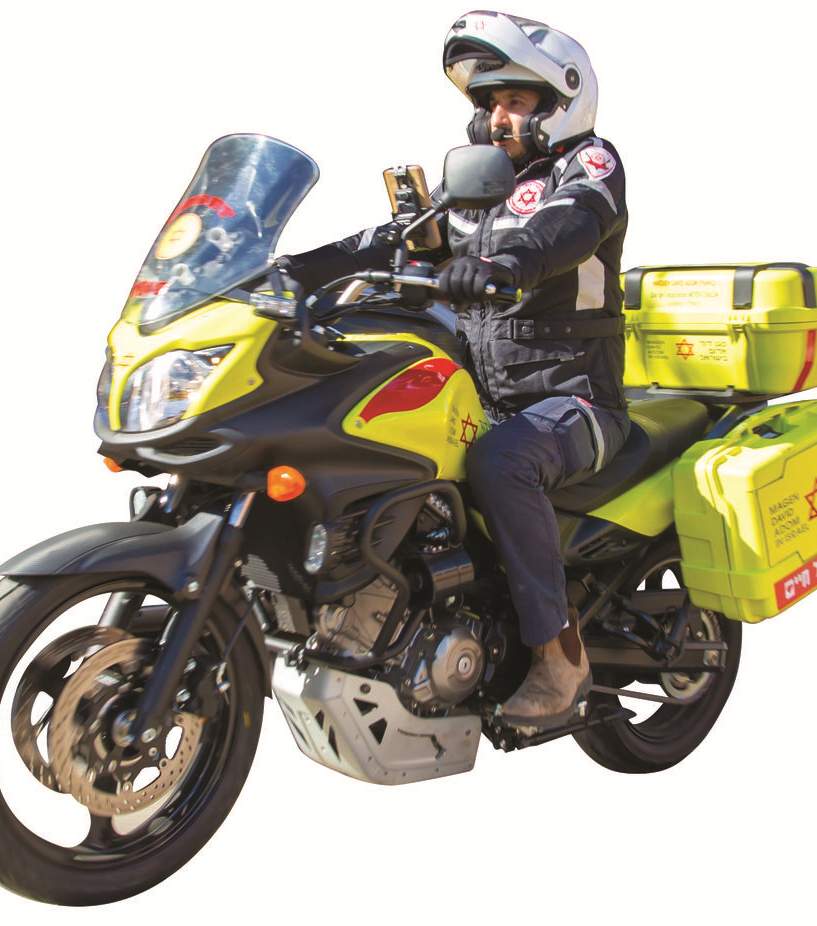 Through heavily clogged rush-hour traffic in Tel Aviv, MDA medics on Medicycles make a critical difference when a terrorist stabs 10 people, including an American tourist in 2012. Photo by MDA.

Nowadays, the First Responder Unit is equipped with more than 650 Medicycles and approximately 7,000 highly trained EMTs and paramedics who specialize as first responders and are able to perform lifesaving treatments and have often stabilized patients before ambulances evacuate them to nearby hospitals.

By 2006, 76 years after its founding, MDA was officially recognized by the International Red Cross and Red Crescent Movement, finally gaining full international recognition as Israel’s national emergency medical and blood services organization, a designation it had held domestically for decades.

Magen David Adom has been an integral part of Israel’s history even before the state managed to establish independence. Though its past is a source of deep pride, MDA remains intensely focused on the future. In response to projected future needs, MDA just recently inaugurated the “Life Riders” emergency response unit, outfitted with nearly 200 electric bikes that are able to reach patients in areas where conventional emergency vehicles often cannot.

Whether it’s accessing and integrating the newest medical technology, using less conventional vehicles to reduce response times, or being the pioneers of first response protocols and standards, MDA has always kept its eyes — and its pedals — on the future. With all the credit MDA deserves for its efforts, the organization does not act alone. Together with the help of volunteers from all around the world and other Israeli citizens who want to make a difference, and with more than a dozen different local MDA-affiliated Hatzalah organizations across Israel, Magen David Adom continues to save lives, valiantly helping anyone and everyone they possibly can.

The writer is a rising junior at American University in Washington, DC.

About the Author
Michal Cohen is a sophomore at American University studying Public Relations and Strategic Communications with a minor in Political Science. She is a strong believer in the power of communication and is a proud Israeli-American Jewish woman.
Related Topics
Related Posts
Comments