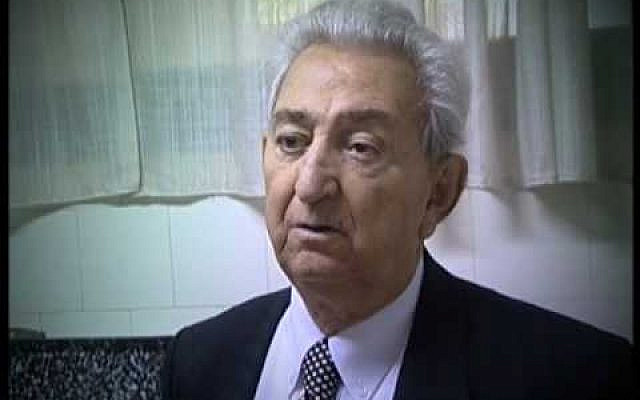 Meir Ezri, Israel’s late chargé d'affaires in Iran from 1958 to 1973, photo from youtube.com

In February former U.S. Deputy National Security Advisor Victoria Coates and Len Khodorkovsky, former senior adviser to the U.S. special representative for Iran, proposed the “Cyrus Accords” a peace initiative in the near future between Iran and Israel. The plan is a peace agreement between the people of Iran and the people of Israel who will benefit from one another economically, politically and in all other spheres. I do believe in the success of the Cyrus Accords once the current radical Islamic regime in Iran is removed from the equation. Coates and Khodorkovsky argue that Israelis and Iranians have a common bond and friendship dating back to Iran’s ancient ruler, Cyrus the Great who liberated the Israelites from Babylonian captivity in 538 B.C. Yet there are more recent examples of successful endeavors accomplished between both peoples from the mid-20th century. Perhaps by examining the more recent close bonds of success between Iranians and Israelis, the new proposed Cyrus Accords can begin to build on those initial seeds of peace and positive relations that existed between Israel and Iran from the late 1950s to 1979.

Those examples of close relations between Iran and Israel can be found throughout the memoirs of the late Meir Ezri “The Legacy of Cyrus: My Iranian Mission”. Ezri was Israel’s chargé d’affaires in Iran from 1958 to 1973, sent by Israeli Prime Minister David Ben Gurion to serve as Israel’s unofficial ambassador in Iran since Iran had not formally recognized Israel. The following are just some of the major accomplishments that Iran and Israel achieved together during the last century prior to Iran’s 1979 revolution…

Israel was emerging as a high technology hub in the 1960s and 1970s. As a result of Ezri’s diplomatic efforts over the course of 15 years, Israel gradually developed substantial economic trade with Iran who purchased Israeli-made machinery, electrical and electronic goods, textiles, agricultural equipment, chemicals and construction equipment. Iran under the late-Shah was undergoing an internal infrastructure boom that was seeking to modernize the oil-rich country into a modern first-world country. Israeli engineers, architects and construction companies were at the forefront of helping with Iran’s infrastructure projects. Tehran’s first two major skyscrapers, the “Plasco Building” and the “Aluminum Building” were designed by Israeli architects with many such of its building supplies coming from Israel. Therefore, the Iranian government under the Shah turned to Israel, a regional non-Arab and advanced western-style country to supply them with many of their goods needed to develop their nation. Likewise, Israel sold the Iranian government under the Shah weapons and defense systems because Iran, like Israel had a mutual enemy– the Arab countries in the region. Of course the economic trade between Israel and Iran was not one-sided, the Iranian government of the Shah sold Israel millions of barrels of crude oil during a time when the Arab states boycotted Israel. In fact the sale of oil from Iran to Israel was so lucrative that in 1968, a joint venture company was established between Israel and Iran where Iran’s oil would be transported to Israel’s Eliat port and deposited into an oil pipeline that ran across the country to the Mediterranean port of Ashkelon. The Eliat- Ashkelon pipeline enabled Iran’s oil to reach its European buyers quickly and without having to bother going through the Suez Canal. 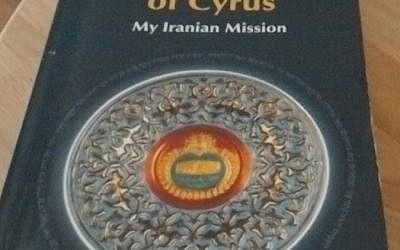 The memoirs of the late Meir Ezri “The Legacy of Cyrus: My Iranian Mission”, photo by Karmel Melamed

In his memoirs Ezri outlines the array of academic ties that gradually developed between Israeli and Iranian university scholars in the fields of literature, history, geology, medicine, water irrigation and engineering. Perhaps the most well-known Iranian academic to visit Israel during this time was Professor Said Nafisi, who had international acclaim for his expertise in Iranian history and literature. According to Ezri’s memoirs, Nafisi visited Israel in 1958 and later used extensive historic papers and background information from Israeli universities for his own research. Aside from Nafisi, Ezri highlights other well-known Iranian medical experts who visited Israel and built strong ties with Israeli academics as well as scientists in various fields. Likewise Israeli scholars like the late professor Amnon Netzer travel extensively throughout parts of Iran to study the roots of the ancient Judeo-Persian language and the ancient Persian languages from Iran’s ancient past. 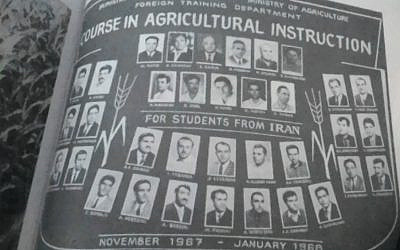 List of Iranian graduates from Israel’s agricultural education course from November 1967, photo from “The Legacy of Cyrus: My Iranian Mission”.

From its inception and due to necessity, Israel has been at the forefront of agricultural advancements and as a result offered its expertise to countless countries. In the 1960s and 1970s Iranian state-owned and private-owned farms utilized Israeli agricultural know-how to advance their own farms. Ezri in his book lists the various agricultural classes Israel provided Iranian farmers and trainees in Israel for six week time periods. Israeli agri-experts provided courses to Iranians on irrigation, agri-management, cultivation of cotton, rearing of poultry, management of dairy farms and the use of chemical fertilizers for improvement of crop yields. After the September 1962 earthquake in Iran’s Qazvin region, the “Iranian Independent Irrigation Corporation” invited an Israeli team of experts to provide a special course in geology for select Iranian students at Tehran University.  The popular Israeli “Mashav” program also sent countless Israeli experts to Iran in order to provide Israel’s famous drip-irrigation technology to farms across Iran and to recommended Iranian farmers grow cotton and sugar-beets in certain Iranian provinces to increase their crop yield. The Israeli agricultural programs and technologies were so successful, the Iranian farms were able to grow enough crop for consumption in Iran and even for sale to other countries in the region.

According to Ezri’s memoirs, many of the water and sewer systems in major Iranian cities such as Isfahan and Bandar Abbas were created and installed by Israeli private-owned companies and government-owned companies such as “Tahal”. After the 1962 Qazvin earthquake, Israeli companies were also brought into the Qazvin province to drill deep water wells that helped transform Qazvin from a barren desert land into one of the most successful agricultural hubs in the Middle East. When entire regions of Iran like Hamadan and Kermanshah needed household and irrigation water systems, it was Israeli companies who won the contracts for installation of such systems. Believe it or not these systems are still functioning today in Iran. Interestingly enough, the radical Islamic regime today with its severed ties with Israel, does manage to buy parts to maintain many of these systems through European companies that purchase them from Israel. Likewise “Mekorot”, the Israeli national water utility, was asked by the late Shah’s government to drill for fresh water throughout Iran and to run a large project on the Iranian part of the Caspian Sea. Additionally during the 1970s the Israeli company “IDE” installed 36 small desalination units on Iranian Air Force facilities and 19 others throughout Iran. 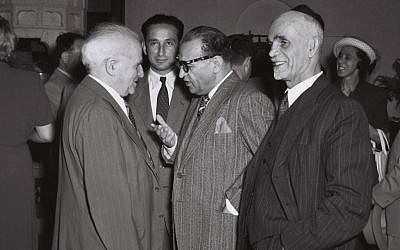 Israel from day one and until today has been a leading nation in medical treatments and technologies. During the 1960s and 1970s thousands of Iranians of various faiths traveled to Israel for medical care when doctors in Iran were unable to help them. In his book, Ezri outlines eye illnesses and gynecological infertility as the two primary areas which motivated thousands of average Iranians to visit Israel for treatment. Israel had not only successfully treated thousands of Iranians with these medical problems and other ailments, but travel and treatment to Israel from Iran was substantially less costly for Iranians that travel to Europe or the U.S. Countless, Israeli doctors and researchers frequently also visited Iran to share their new techniques and medical treatments to Iranian physicians because often times Israeli hospitals could not accommodate the huge influx of Iranians seeking medical treatment in Israel during that time. Interestingly, in his book Ezri even highlights one instance in which Iran’s chief rabbi Yedidiah Shofet came to him and asked for Israel’s help in treating the all-important Iranian Ayatollah Malek Al-Motekalemin. With approval of Israeli officials, this ayatollah at that time was permitted to travel to Hadassah Hospital in Israel and successfully received treatment for his serious illness. Al-Motekalemin subsequently returned to Iran and even began preaching sermons in his mosque that praised Israel for curing him!

Emergency Israeli Aid for Iran in Times of Crisis

In April 1960, the Iranian city of Lar was struck with a horrific 6.1 earthquake killing nearly 500 Iranians. Likewise in May 1962 northern part of the city of Tehran encountered severe flooding. And in September 1962 the Iranian province of Qazvin was devastated by a 7.1 earthquake that killed more than 12,000 Iranians. In all three of these instances, Ezri’s book reveals how Israel sent immediate emergency aid and assistance to help search for survivors and treat those injured. In all three instances, Israel never sought publicity nor any funds for offering to help the needy and devastated Iranians.

The seeds of peace, friendship and cooperation Ezri and other Israelis planted with their Iranian counterparts are indeed vast and go far beyond the short list I have complied. Yet these examples may be a phenomenal place for Iranians and Israelis today to begin the new Cyrus Accords. As we can see, the areas of successful cooperation between both peoples already yielded incredible results prior to 1979 and picking up again on those joint ventures from 42 years ago may be the fastest way for both nations to prosper together in this new century. One need not look back to centuries past when Cyrus the Great forged the first bonds of friendship with the nation of Israel. The fruitful ties fostered from 1958 to 1979 between Iran and Israel are perhaps the best roadmap that should be considered for the future Cyrus Accords. My hope and prayer are that the people of Iran will first topple the current totalitarian Islamic regime which is holding back their growth and prosperity in order to launch the Cyrus Accords.