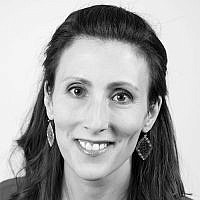 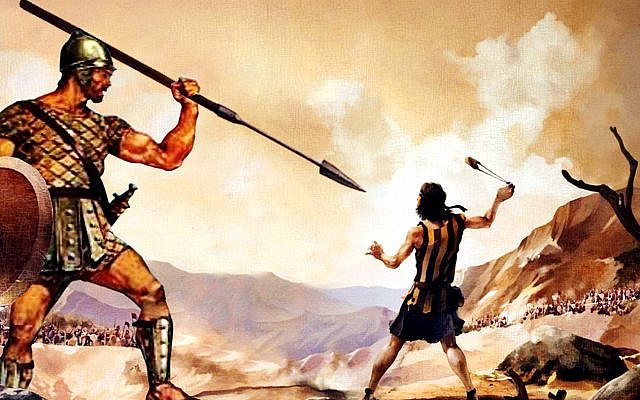 His name preceded him.

He was mammoth, ironclad, and invincible.

David was feeble, green, and an easy target.

But David slayed that giant. And as he did, he spoke of God, of his people’s pride, and of his unwillingness to let them go down without a fight.

Once, we were David. Once, we fought with crude weapons, and all the odds stacked against us. Being David was terrifying, but it was simpler, in a way. Because no one questions the rights of a shepherd to protect his flock.

But then, two things began to happen, in different parts of the world, and along parallel historical paths.

In the Middle East, our young fledgling state began to grow in strength, and in confidence. It fought defensive wars. Wars of survival, in which defeat was not an option. But each victory chipped away at our rendering of the unarmed David. And so, internally, quarrels broke out. People argued on the streets, in buses, and at rallies. They argued about what Israel is, and what it should do. The arguments were disguised in realpolitik. But if you were to dig deeply, down to the core of every debate, you would find an identity crisis staring you in the face. Because while we want nothing more than the ability to shield ourselves from our enemies’ swords, the prospect of becoming a merciless Goliath remains our greatest existential fear.

So, for decades, we scrutinized, and we yielded, and we renounced, and we hoped. Each time believing that it would bring peace. That maybe, at long last, we would need only plowshares.

And as we did, countries to our west were beginning to take a careful, honest look at themselves. In the aftermath of two world wars, the West began searching for the root causes of phenomena like colonialism, systemic racism, homophobia, and misogyny. And what the West discovered, time and again, was a Goliath lurking within. It found cruelty rooted in power, sustained by hierarchy, and fueled by hate. As a result, good people in the West began to bristle at anything with the faintest whiff of the giant.

And now, as is so often the case in history, those two developments are converging. And they are conflating. And mostly, they are confusing. Because many in the West now look at Israel through a narrow lens and see Goliath. They see strength and equate it with evil, and they see power and assume it must be oppressive. What many, looking through that guilt-colored lens cannot see, are the complex truths that Israel has been wrestling with for the better part of a century.

The truth that while, on limited fronts, we may appear strong, we remain precariously perched between larger, stronger, richer nations sworn to our destruction. So, we are forced, at all times, to both wield power, and to curb it; simultaneously worrying about our collective body, and soul. The truth that we will always demand our government do what it needs to protect our children, but that we will also never stop crying for the children on the other side, sacrificed by their government on the altar of media manipulation.