The Blogs
Richard H. Schwartz
Vegan, climate change,and social justice activist
Apply for a Blog
Advertisement
Please note that the posts on The Blogs are contributed by third parties. The opinions, facts and any media content in them are presented solely by the authors, and neither The Times of Israel nor its partners assume any responsibility for them. Please contact us in case of abuse. In case of abuse,
Report this post. 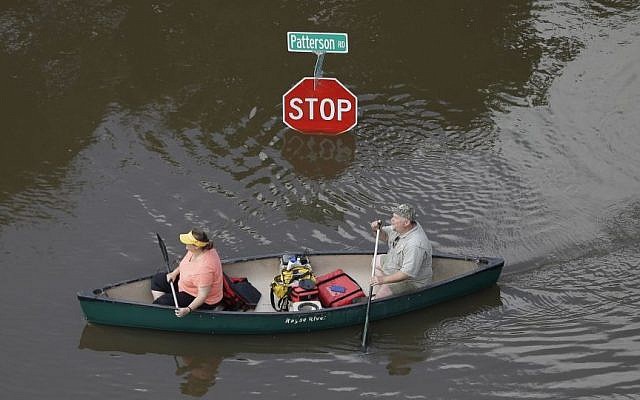 In this aerial photo, people canoe through floodwaters past a stop sign near Bear Creek Park Saturday, May 30, 2015, in Houston. (AP/David J. Phillip)

When I speak to people about climate change, they often say that perhaps it will be a problem for future generations, but not now. The recent very severe heat wave in Israel, with temperatures ranging from the mid 90s to well over 100 degrees Fahrenheit, resulting in the deaths of a one-year old baby and an 18 year old soldier and in many other people fainting or suffering from dehydration, is an indication that the effects of climate change are already being felt. Other countries in the Middle East experienced even higher temperatures, which reached 122 degrees F in Iraq and 134 degrees F in Iran.

Of course the Middle East is not the only region already suffering from the effects of climate change. In the U.S., as I write this on August 4, 2015, there are 23 major wildfires in California, some burning out of control, worsened by the very dry conditions after four years of severe drought, and Florida is suffering from record floods after several days of heavy rains. The heat waves, drought, wildfires, flooding, when rains do fall, and mudslides in California have been so severe over many years that the governor of California has said that, “humanity is on a collision course with nature.”

There have been increasingly dire warnings about climate change from science academies worldwide and the vast majority of climate experts. There warnings are reinforced by the following:

Here is what is especially frightening. All the severe climate events so far have been due to a temperature increase of about 1.5 degrees F since the start of the industrial revolution. While climate scientists hope that the total temperature increase can be limited to 3.6 degrees F, largely because that is the best that can be hoped for based on the greenhouse gases (GHGs) already in the atmosphere and current trends, the world is now on track for an average increase of 7 – 9 degrees F, which would produce a world with almost unimaginably negative climate events.

Another important factor to consider is that the Pentagon and other military groups believe that climate change will increase the potential for instability, terrorism, and war by reducing access to food and clean water and by causing tens of millions of desperate refuges fleeing from droughts, wildfire, floods, storms, and other effects of climate change.

Based on the above facts, it is essential that averting a climate catastrophe become a central focus for society today. Fortunately, there has been some progress in terms of shifts to renewal energy and increased fuel efficiency of cars, but much more must be done to avert a climate disaster.

One issue that has been largely overlooked is the major contribution of animal-based diets and agriculture to climate change. A 2006 UN Food and Agriculture Organization report, “Livestock’s Long Shadow,” indicated that animal-based agriculture emits more GHGs (in CO2 equivalents) than is emitted by all the cars, planes, ships, and all other means of transportation worldwide! A 2009 cover story in World Watch magazine, “Livestock and Climate change,” by two environmentalists associated with the World Bank, indicated that the livestock sector is responsible for at least 51 percent of all human-induced greenhouse gases! This very significant effect is due to the fact that methane emitted by cows and other animals is at least 72 times as potent per molecule as CO2 during the 20 years that methane stays in the atmosphere.

Bottom line: it is essential that there be a major societal shift away from animal-based diets in order to avert a climate catastrophe and other potential environmental disasters and to help shift our imperiled planet onto a sustainable path.

About the Author
Richard H. Schwartz, Ph.D., is the author of Judaism and Vegetarianism, Judaism and Global Survival, Who Stole My Religion? Revitalizing Judaism and Applying Jewish Values to Help Heal our Imperiled Planet, and Mathematics and Global Survival, and over 200 articles and 25 podcasts at JewishVeg.com/schwartz. He is President Emeritus of Jewish Vegetarians of North America (JVNA) and President of the Society of Ethical and Religious Vegetarians (SERV). He is associate producer of the 2007 documentary “A Sacred Duty: Applying Jewish Values to Help Heal the World.” He is also a Professor Emeritus of Mathematics at the College of Staten Island, which is part of the City University of New York.
Related Topics
Related Posts
Comments