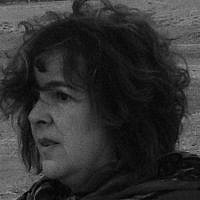 The Blogs
Emma Davies
Apply for a Blog
Please note that the posts on The Blogs are contributed by third parties. The opinions, facts and any media content in them are presented solely by the authors, and neither The Times of Israel nor its partners assume any responsibility for them. Please contact us in case of abuse. In case of abuse,
Report this post. 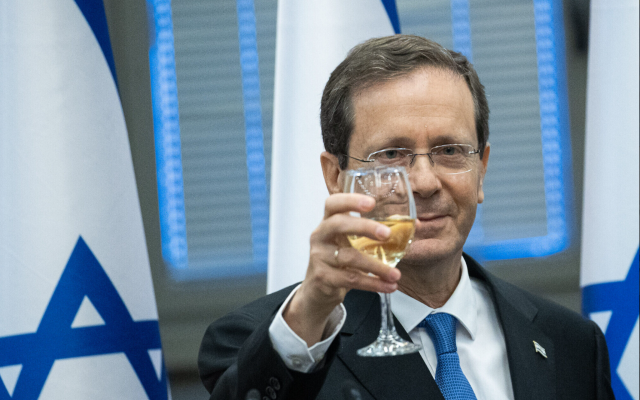 Isaac Hertzog raises a toast at the Knesset after he was elected by lawmakers as Israel's 11th president, June 2, 2021. (Yonatan Sindel/Flash90)

Congratulations on your seven-year appointment as 11th President of Israel. Elected by 87 politicians, you command the rare support of a clear majority in a divided Parliament. Many will wonder whether you will be able to use your influence to help create a critical turning point in the aftermath of bloodshed.

It’s good to hear your acceptance speech honoring the “diversity and uniqueness of the Israeli mosaic… different faiths… cultural depth, critical thinking, tradition and renewal.” I applaud your determination to ”build bridges of consensus” and be a “President for everyone”, including the 21% who identify as Arab or Druze.

You were chairman of the Labor Party between 2013 and 2017. When I was a child in the 1970s, I was a member of Habonim-Dror, a Zionist socialist youth club affiliated to the Labor movement. As an idealistic teenager, I relished our Sunday afternoon discussions about creating kibbutzim, where the means of production and profit were shared equally among members. We learned about Israelis educating Jewish and Arab kids together.

We discussed how centuries of antisemitism were fuelled by propaganda that dehumanized us as Jews. We learned how to advocate for human rights, combat antisemitism and other forms of racism. We wrote postcards to free the ‘refusenik’ Anatoly Shcharansky from thirteen years imprisonment and hard labor.

Natan Sharansky, as he came to be called, didn’t demonstrate the wisdom of Nelson Mandela when released from jail. Victims can become perpetrators; the traumatized can become traumatizers.  Mr. Sharansky exemplifies Israeli politicians in the 2000s, promoting division by supporting illegal settlements on occupied land, including confiscations of Palestinian families’ property in East Jerusalem. As each decade passes, the power of ultra-nationalists and religious fundamentalists appears to have hardened.

Perhaps we can take heart from the recent coalition deal between left and right, Jewish, and Arab political parties in Israel. But even if it holds together, we now face the possibility of Prime Minister Naftali Bennett who has previously used his political power for creeping annexation.

B’tselem’s map of the settlements on occupied land shows that Israel has encroached on so much land that it’s hard to see how the Palestinians can acquire a viable State. The International Court of Justice refers to the West Bank, including East Jerusalem as ‘the Occupied Palestinian Territory”. The United Nations General Assembly resolution 67/19 of 2012 affirmed again that East Jerusalem forms part of the West Bank. Mr. Herzog, I appreciate this is a political issue and thus, perhaps, beyond your remit as President. However, you have expressed the importance of fighting antisemitism and defending Israel’s ‘good name in the family of nations”.

You have supported a negotiated two-state solution in the past. With respect, I urge you to reflect on the part that Israel’s settlements in the West Bank play in perpetuating anti-Zionism and antisemitism in Israel as well as the diaspora.

Israel’s actions on occupied land also perpetuate tensions within the Jewish diaspora. Today’s young idealistic left-wing Jews are more likely to see Zionism as incompatible with their values. The values of many young Jewish Americans also clash with the human rights violations of the Israeli State. 588 people from Habonim Dror – North America, the same movement I belonged to in the UK, called for a huge shift in their relationship to Israel last year, in opposition to settlements on the West Bank.  We are simply following our training. The Zionist Labour Movement taught us that justice, equality, and human rights are paramount.

As I grew into adulthood, I learned from the horrors of the Holocaust the importance of critical thinking, and not dehumanizing ‘the other’. Our ancestors showed their wilful blindness to the fact that Palestinians were living in Palestine when Jews sought refuge there. On the other hand, I’m acutely aware that one side of my Jewish family would not be alive today if they hadn’t been able to emigrate to Palestine from Nazi Berlin, just in time.

I can’t dismiss the thought that one day, my children or grandchildren may need a similar life raft. Our history of persecution is in part what binds us. I hope it’s not also the catalyst for our self-destruction. Perhaps it’s nearly time to revisit the United Nations Partition Plan for Palestine adopted by the UN General Assembly in 1947. It was supported then by the Jewish Agency for Palestine, the organization you later led in 2018 as Chairman of the Jewish Agency for Israel.

When you accepted the position as President, you talked about ‘creating a breathing space for dreams’. My dream is that those who guide the Israeli State grow beyond the traumas of the past and reflect on the facts and legends of the history of Zionism. Through truth and reconciliation, it could be feasible to repair the harm and start to resolve the conflict. Now that would epitomize, to use the words you emphasized in your acceptance speech, an ‘exemplary society’.

About the Author
Dr. Emma Davies is a Senior Lecturer in Forensic Psychology at Goldsmiths College, University of London. She has expertise in the role of adverse childhood experiences and trauma in perpetuating intergenerational violence.
Related Topics
Related Posts
Comments
Advertisement