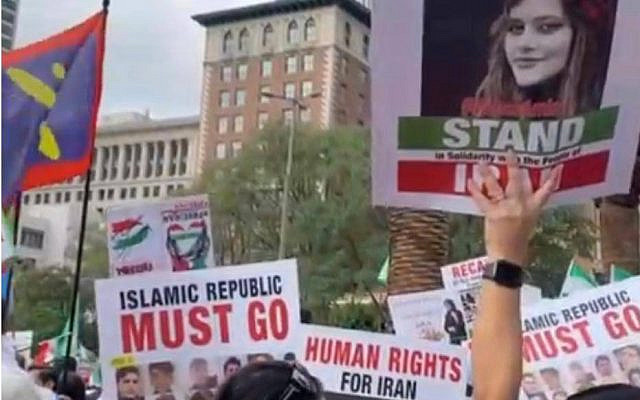 The Islamic Republic of Iran is almost 44 years old; in these 43 years, it has brought nothing but destruction, misery, and calamity to the Iranian nation. At the same time, it has created enmity with the whole world. All this has been a religious tyrannical rule over Iran, and in the end, it has discredited the Iranian people with a stain of shame.

They openly murdered Iranian youths during the past few weeks under the guise of compulsory hijab. The killing of Mahsa Amini finally got people enraged enough to rise; youths were infuriated by these heinous acts and behavior. So, for more than 5 weeks, people have been taking to the streets and shouting for the overthrow of the entire oppressive system. At the same time, a huge flood of Iranians abroad in countries all around the world have come to support them and ask western countries to stop appeasing the Islamic regime and support the struggles of the Iranian people in a practical way.

In 1979 Westerners who claimed that human rights were not respected in Iran supported the Mullah revolution. After 43 years, you can see that in addition to the fact that the rights of no living being is respected in Iran, a medieval regime, which began to kill, take hostages, and destroy Iran from the very first day, came to power. The whole world knows by now, finally having realized that this system has wreaked havoc on Iran, the region, and the world during its years; everyone except for people like Robert Mali, the current representative of the United States in Iran affairs, who is apparently very worried about the downfall of criminals without borders.

When Khomeinism came to power in Iran, Jimmy Carter, the president of the United States at the time, was among those who claimed that human rights were not respected in Iran and the region and claimed that the people of Iran and the region could have their human rights respected, but not only did human rights not come to our countries, Islamic terrorists began sprouting from the region. Of course, he himself has established a foundation called Habitat for Humanity to build houses for low-income and the homeless in America so that he could deliver on the dream that he did not deliver with the Islamic Republic!

After Russia’s military attack and aggression on Ukraine, Europe, which tied its long-term energy strategy to Russia and planned its policy by supplying energy from Russia suffered a huge blow. Just like Mr Carter’s illusion of human rights and cooperation with allies like the European troika of England, France, and Germany!

Today, the people of Europe are facing a very difficult situation from an energy standpoint and all a result of the European leaders deliberate misguided strategy of long-term appeasement of the Khomeinist regime. Many analysts have sounded the alarm for years that in the name of globalism, all the eggs should not be put in China and Russia’s basket and that such a policy would lead to dire consequences.

Seasoned politicians and analysts in the West have repeatedly warned that Iran is a large country in Asia where geopolitics and energy are very important. Vital to the West and the Middle East, they cannot and should not be appeasing the Khomeinist Mafia for short-term interests.

From any angle you look at the long-term plan of the West, especially Europe, there is no better strategy than supporting the struggles of the Iranian people and ending appeasement with the Islamic regime. It is an obvious fact that the people of Iran, especially the youth, uphold a democratic culture and deserve a free country and that their thinking is more closely tied to Western culture than to Russia and China and Eastern cultures in general!

Relying on this potential, Europe can solve its long-term energy problem, but unfortunately, many countries or politicians still insist on the policy of costly appeasement despite listening to the collective voice(s) of the Iranian people.

Several countries, even their parties, fully agree that the Iranian people should be supported and that appeasement with the Khomeinist regime should be halted, solving the problem with a throwaway statement about human rights. But fortunately, this time, the voices in favor of the Iranian people in the European Union are very clear. Although there is a kind of division among them, a global consensus against the Islamic Republic has been launched. Now, we must wait for the executive decisions of three critical European countries – Germany, France, and England.

In this regard, many politicians and high-ranking representatives in the European Union have demanded that the embassies of the Islamic Republic as centers for spying on various European countries. To that end, they are shedding light on the financial resources of the leaders of the Islamic regime and their relatives, as they have been abusing the freedoms of the West for years, establishing numerous dummy corporations and shell companies and have been involved in money laundering. In this way, it has taken over the management of some key areas – such as Instagram – and has also stepped up the importation of suppression and eavesdropping devices.

If the people of the West do not know, experienced politicians and analysts know that the people of Iran understand the people of Ukraine better than anyone else. Iran has been attacked and occupied by Russia several times and has lost many of its territorial cities. Therefore, Iranians have a very bitter historical experience with their usurping bully neighbor, Russia. This is where the Iranian people are tangible sympathizers, if not empathizers, with the Ukrainian people.

The Islamic Republic is not Iranian and has never thought of Iran’s interests. The people of Iran should be considered separate from the Islamic Republic; it is nothing more than a cult of Imam Zaman (the Hidden Imam) or Twelver Shia that only thinks about quickening doom for this Imam to emerge, only to put the Khomeinist regime in charge of the entire planet.

Iranian people think about the planet, democratic living and humanity; that’s why the slogan “women, life, freedom” has covered the whole world. In how many more languages should the people of Iran explain to the West that their country is occupied, and they are hostages of a Khomeiniist Islamist terrorist group?!